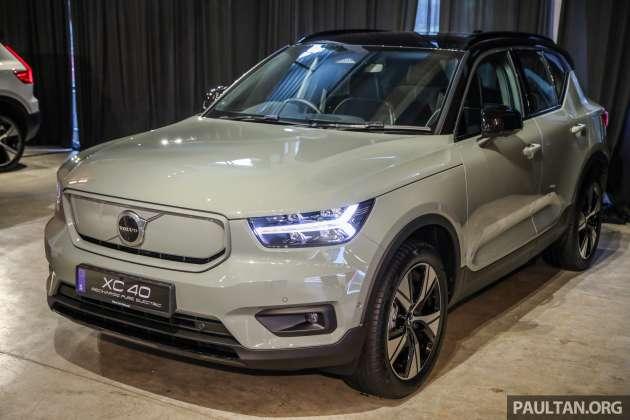 The Volvo XC40 Recharge Pure Electric has finally been revealed in Malaysia, several months after Volvo Car Malaysia (VCM) began accepting registrations of interest for the model. This is the all-electric version of the XC40 crossover, which first arrived here with the T5 AWD powertrain (petrol only) back in 2018, followed by the Recharge T5 (petrol plug-in hybrid) last February.

With today’s reveal, car buyers who want the XC40 will soon have three powertrains to choose from, namely the existing T5 AWD and Recharge T5, with the Recharge P8 AWD being the newcomer. We say soon because VCM has not provided official pricing yet.

The company used the term “hassle-free price,” which is the recommended retail price of the XC40 Recharge Pure Electric (we’re gonna call it the XC40 EV for short) with a public charging cable (likely Type 2 for AC chargers); a service package; a five-year, unlimited mileage warranty; an eight-year, 160,000-km battery warranty; and five-year roadside assistance.

This “hassle-free price” will be announced on the company’s website come April 4 – which is when bookings will also open. Deliveries will take place closer to the end of April, but you can view the new model at authorised dealerships in the meantime. Wondering where the C40 is? Well, it will arrive later this year.

Now, while we don’t have an asking price for now, there is a significant piece of information we do have: the XC40 EV will be a locally-assembled model, making it the first CKD EV in the country. Locally-made Volvo cars are currently exported from Malaysia to neighbouring ASEAN countries like Thailand, and the brand’s EVs will be no different.

Thanks to the government’s exemption of import and excise duties, which covers CKD parts, the XC40 EV could be attractively priced, but we’ll have to wait until next month to find out if that’s true. To establish context, the T5 AWD currently goes for RM230,090.32, while the Recharge T5 is priced at RM242,711.

Design-wise, the XC40 EV is styled differently from those offerings thanks to its covered front grille, but when viewed from other angles besides the front, it looks pretty much identical. This includes the Recharge script on the C-pillars and the charging door on the left of the vehicle, both of which are also see on the PHEV version. Keep in mind that this is the pre-facelift version and not the update that was revealed globally last November. 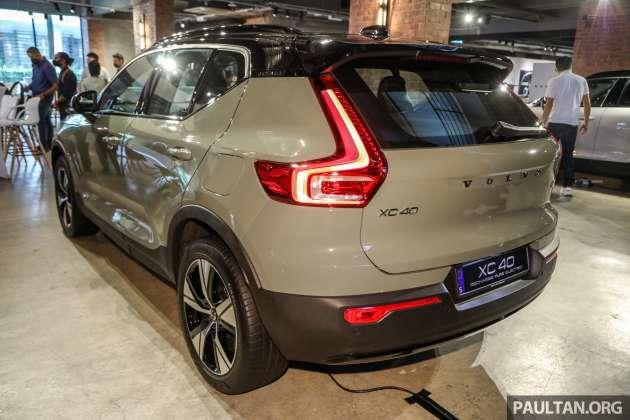 The interior is also familiar, with an identical dashboard layout as the XC40. As with the exterior, there are some differences, starting with a revised 12.3-inch digital instrument cluster that has model-specific displays for the EV powertrain. Additionally, the infotainment system is built on Android Automotive OS, providing users with access to familiar services such as Google Maps, Google Assistant and Google Play Store.

The XC40 EV is the third model (after the facelifted XC60 and S90) sold by VCM that comes with telematics and the Volvo Cars companion app, allowing owners to remotely check on their vehicle status, lock/unlock the vehicle, pre-conditioning and request for roadside assistance during emergencies. We were told that the service is free for the first four years after purchasing the vehicle, but weren’t provided pricing for renewing the subscription after said period (we’ll update as the info comes in).

One point of distinction that the eye won’t notice is weight, as the larger battery pack in the XC40 means it tips the scales at 2,150 kg, or about 275-440 kg more than the petrol-powered duo. The battery is stuffed into the floor of the XC40’s Compact Modular Architecture (CMA) and encroaches slightly into the space below the boot load floor, resulting in slightly less luggage space (413 litres) compared to the other XC40 models with 460 litres. However, this is compensated by the front trunk (frunk) that offers 31 litres of storage space.

Said battery is a lithium-ion unit with an energy capacity of 78 kWh, so you’ll get about 418 km of range on a single charge following the WLTP standard. For charging, the XC40 supports AC charging at 11 kW with a Type 2 connection, which takes about 7.5 hours for a full charge. Alternatively, there’s DC fast charging up to 150 kW with a CCS2 connection, where a 0-80% state of charge (SoC) is achieved in just 33 minutes – you can find a list of available DC charging stations here.

The direct rival to the XC40 EV in the premium compact electric SUV space is the Mercedes-Benz EQA, which was launched last week, has about the same range but half the power output, and is offered in a sole EQA 250 AMG Line variant priced at RM278,201.25. Of the two, which one do you prefer? Or are you hoping for something else?