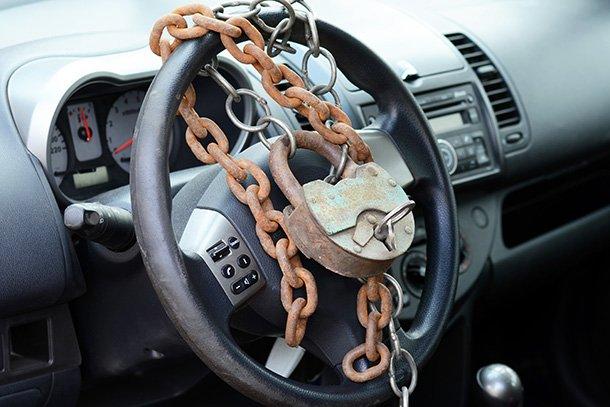 Let’s get something clear right from the start: these locks are best thought of as a deterrent to the scourge that is vehicle theft and not an outright prevention tool. If two identical cars are parked side by each, one with a steering wheel lock and one without, there’s a good chance the robber is going to target the one sans lock.

Think of it this way: if there’s cheesecake on two different tables, and only one of those tables is guarded by an angry dog, chances are you’re going to grab the undefended dessert.

But, if you really want cheesecake, there are probably ways around that dog. The same goes for these locks; if a miscreant is hell-bent on taking your car, they’re likely going to find a method to defeat whatever security system is in place … including a steering wheel lock. VerticalScope lawyers are prohibiting me from listing examples of how to do so but I’m sure you all have active imaginations.

Consider these an ounce of prevention, then. And always be sure to park under a streetlamp.

This brand is as synonymous with steering wheel locks as Kleenex is to tissues. More than a few competing manufacturers gladly permit their customers to simply refer to their product as a Club when it is, in fact, an actual brand name.

The patented self-locking feature secures itself with a single pull, its hooks wedging themselves tightly against the inside circumference of a steering wheel’s rim. Those hooks are solid steel, by the way, covered in the brand’s trademark red paint. This particular offering from The Club (and there are many) fits steering wheels with an inside dimension of 8.75 to 14 inches.

If a gen-u-wine Club is too much hassle or too much money, this steering wheel lock might be an answer. Fitting most steering wheels, it is designed to clamp atop the tiller and rest against the dashtop. This seemingly prevents the steering wheel from being turned as the yellow tongue – for lack of a better word – will bring up against an immovable part of the car.

Of course, all this depends on the design of your car’s dashboard. Owners of a Saturn Ion, for example, will be completely out of luck. All the same, one would have to wonder what type of thief bothers to steal an Ion. They’d likely be better off nicking a pair of Reeboks.

Despite it being advertised as a steering-wheel lock, this anti-theft device looks for all the world like a medieval implement of torture that one might find in the Tower of London. This spellcheck-vexing Disklok clamps over the entire wheel, turning it into a type of post-apocalyptic drum face. Scuppering airbag theft is listed as a feature but one wonders what would happen to this thing if a burglar set it off intentionally.

There’s a Club-style appendage atop the Disklok as well, a feature which presumably gets in the way of steering the car. The seller says it “spins on attack” which sounds like a WWE move to us. Fits cars with steering wheels measuring between 13.7 and 15.3 inches across.

Here’s a style of steering wheel lock that runs between the wheel itself and one of the car’s pedals. In theory, the marriage of the wheel and pedal should prevent the latter from being used, rendering the thief without brakes or a clutch pedal. It does stay out of sight compared to a traditional steering wheel lock, which can be a good or bad thing depending on the argument taken. Is it better for the robber to see the device and move on? Might they cause wanton damage to the interior in frustration once they pop the door and then see this thing? The answer is up to you.

It also comes with a combination lock, said to be more difficult to defeat than a traditional lock-and-key cylinder. A lack of reviews on this particular product gives pause, as does some of the hastily translated ad copy.

Pros/Out of sight, attracts less attention than other locks Cons/No reviews Bottom Line/Could double as a reaching tool at the supermarket Shop Now

This product is similar in intent to the one listed two entries above but goes about it in a slightly different manner. First of all, it looks like someone took a yellow highlighter to the Batsignal, which can be good or bad depending on whether one thinks loudly announcing an anti-theft device is a good idea.

Constructed of resin and reinforced with stainless steel, the sellers say it won’t heat up in the relentless summer sun like some other products in this segment. Note that reviews are all over the map, with barely 60 percent of buyers giving this thing three or more stars.

Pros/Built-in wailing alarm, has an exclamation point in its name Cons/Kinda conspicuous Bottom Line/Batman wants his toys back Shop Now

Your author would like to pretend that the manufacturer of this product wanted to call it the Optimus Prime steering wheel lock but had their attempts scuppered by a cadre of overzealous lawyers. Hey, at least it shares colors with the leader of the Autobots.

Operating in precisely the style of The Club, this lock gets wedged between the steering wheel rim as a theft deterrent. It amuses us to no end that the seller chooses to show it in action on a new Rolls Royce, as that car is probably the least likely to ever find itself bearing such a device.

Here’s a device that attempts to marry pretty much all of the locking configurations we’ve seen so far in this post. A helmet-shaped yellow shield drops down over the car’s steering wheel, extending down over the airbag hub while gripping approximately one-third of the rim.

Meanwhile, an extendable arm pulls straight out of the device, acting as both the locking mechanism and a Club-like appendage designed to make steering difficult. Such a design does introduce a potential failure point not seen in other locks.

Pros/Lightweight, will fit under your seat for rapid deployment Cons/Might be trying to do too much at once Bottom Line/Don't mistake it for an actual bike helmet Shop Now

We’ll end this list the same place in which we started – with a product from The Club. This is a snazzier LX model (did they take their naming convention from 1990’s Ford?) and is painted silver in color rather than see-me-now bright red.

Reviews are largely positive, though some vocal opponents complained of a janky lock (see the other Club entry) and a gummy feel to the bar’s coating. As an aside, do you think actual thieves go online and leave bad reviews for these things in the hopes customers won’t buy them, thereby making their criminal activity easier? The mind reels.

Can you steal a car with a steering wheel lock?

Honestly, no security is always foolproof, and if an intruder or a thief is determined enough, they can steal anything they want, be it your car, your highly secured data, a PC, a cellphone, or anything for that matter. However, when you put a lock on your valuable assets, they add an extra layer of security which makes it difficult for the thieves to get what they want.

The same is the case with the steering wheel locks. When you install one, the thieves will have to spend more time to break it before they can steal and drive away your car.

In addition, the type of lock and its built quality also plays a major role in adding obstructions for the thieves in their stealing act. For instance, if you have installed an enclosed steering wheel lock from a reputed brand, the thieves will have to struggle more to break it, and as a result, their chances of getting caught would be remarkably increased. On the other hand, if it is a traditional bar-type steering wheel lock, it would be easier and quicker to break.

With that said, if you are planning to secure your vehicle with a steering wheel lock, it would be a good idea to have a strong and durable one manufactured by a reputed brand.

Yes, if they are determined enough, they can break the lock. However, it would be wise to install a wheel lock that is securer and harder to break.

One of the lock types that is considered securest and also put an impactful psychological effect on the thieves’ mind is ‘Enclosed Lock’. An enclosed lock covers the entire steering wheel and prevents it from moving. This type of lock is comparatively harder to break, and therefore adds a stronger layer of security to your car. 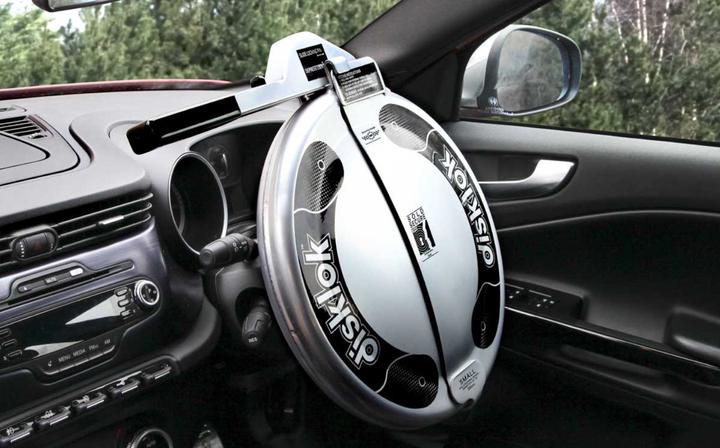 The bitter truth is, even enclosed locks can be cracked, but because it takes a lot of effort and time to get it done, your car can be considered more protected against thefts.

Yes, they do. When you install a steering wheel lock, your car is protected in multiple ways, namely:

A car with a steering wheel lock installed is harder to steal. If the lock that you have installed is secure and of strong built, it would be cumbersome and tedious for the thieves to break it.

A car with a locked steering wheel may discourage the thieves, and many times, they might even drop the idea of stealing your vehicle altogether. In other words, if a steering wheel lock is clearly visible, as is the case with the enclosed or traditional locks, anyone with an intention of stealing would consider avoiding your car.

Steering wheel locks prevent a car from turning. Therefore, even if a thief somehow manages to enter your car and tries to drive it away without breaking the lock, it would be impossible for them to turn the vehicle on the road, especially on the doglegs.

Therefore, even if the steering wheel locks can be broken, it is a wise idea to secure your car with one for its protection.

From time to time, TTAC will highlight automotive products we think may be of interest to our community. Plus, posts like this help to keep the lights on around here. Learn more about how this works.

(Editor’s note: This post is meant to both help you be an informed shopper for automotive products but also to pay for our ‘operating expenses. Some of you don’t find these posts fun, but they help pay for Junkyard Finds, Rare Rides, Piston Slaps, and whatever else. Thanks for reading.)

Back to TopLeave a Reply