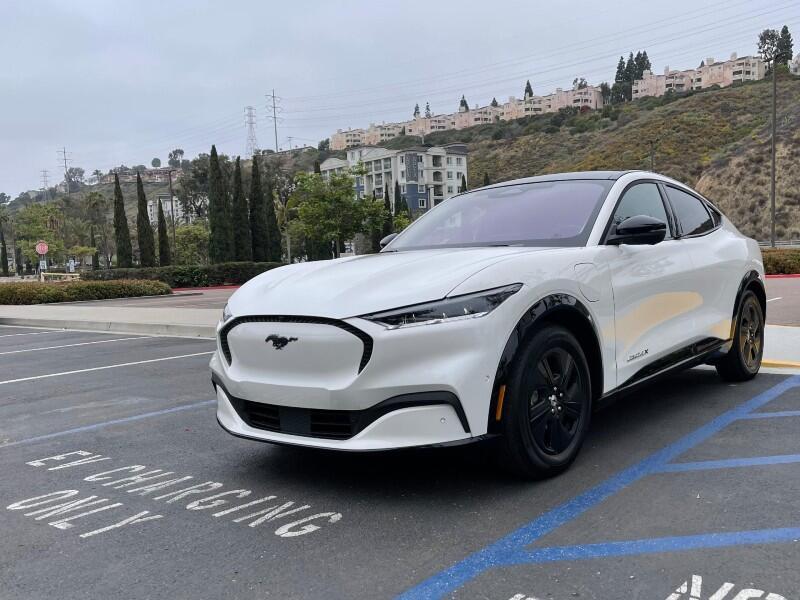 One of the most frustrating parts of owning an electric car is charging on the go. We have home charging pretty well figured out, at least if you don’t rent or live in an apartment complex. But charging out in the wild is a mish-mash of different charging networks, standards and countless apps.

Once you actually find a charging station that works with your vehicle, and then download the appropriate app, and then plug your car in, far too often, the charger doesn’t even work properly. It’s a nightmare, as Peter Virk, VP of the IVY Ecosystem at BlackBerry put it an email:

“The current EV charging ecosystem is a nightmare to navigate—where and how to charge, what app to use, how to reach out for assistance—none of which ever comes across as “easy.” The bottom line is that the path to the mass adoption (and acceptance) of EVs will only come to pass if the industry comes together to solve these challenges.”

That’s why I was thrilled to test out the new Ford Mustang Mach-E electric car. Ford has signed up a number of charging networks to be part of its well-named FordPass Charging Network. ChargePoint, EVGO and Electrify America (EA) are all on-board, but it’s that last one that has the killer app.

While all of the networks supported by FordPass can be activated from either the accompanying smartphone app or through the on-board computer in the massive infotainment screen in the Mach-E, only Electrify America supports plug-and-charge—the killer app of EV charging.

With plug-and-charge, EV charging is even easier than buying gas. I took the Mustang Mach-E to an Electrify America charger in San Diego and it was as close to plug-and-play as you can get.

SEE: The 5 best EV chargers you can buy on Amazon right now (TechRepublic)

First, I looked up nearby EA chargers from the on-screen menu in the Mustang and, when I found one I liked, I tapped it and the navigation took me right to it.

I found three brand-new Electrify America chargers, all claiming to offer 150 kilowatt high-speed EV charging via CCS DC fast-charging cables, while the CHAdeMO cable only promised 50 kilowatts of power. The Mustang uses the CCS standard, and it theoretically supports the full 150kW speed if your battery is drained enough.

Mine was still at 75% as it had just been delivered with a nearly full charge, so I didn’t get to see how fast it could go—but I was able to get some juice, running to a bit over 80% in 15 minutes or so. Charge times will vary widely depending on battery status and the weather, but Ford said the Mach-E can charge from 10 to 80 percent in 45 minutes at top speed. It’ll also add 61 miles of range in about 10 minutes if you’re starting from near-empty.

Of course, you’re free to wander around while your car is charging. There’s no need to babysit, so I could have gone over to PF Chang’s or headed into Bloomingdale’s if I needed to top off. 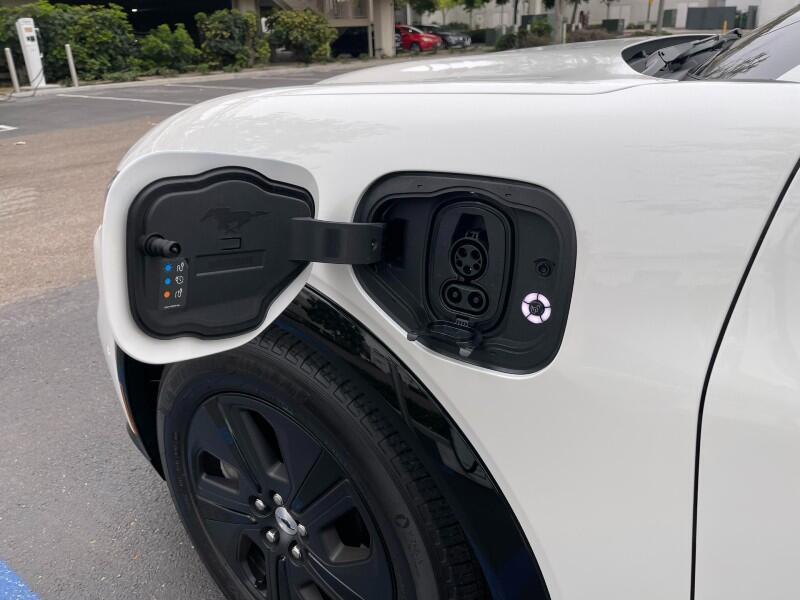 I opened the charging door on the front, driver’s side of the Mach-E and exposed the charging port. The little button and five LED indicator lights on the right of the charge port allow you to check the current battery level of your Mach-E and to unlock the charging cable when you’re finished.

After that, it was plug-and-play. I took the CCS charging cable off the Electrify America charger and plugged it into the Mach-E. I didn’t touch the screen on the EA station at all, though there were options to swipe or tap a credit card or to use the dedicated EA app to begin a charge session.

This particular charger quoted an electricity cost of 43 cents/kWh, but pricing will vary widely depending on location and charging network. That means it’s about $37 to fill the battery from empty here in California, where gas is currently well above $4 per gallon in many places.

After a few moments of thinking, including several updates on the screen that said “Connecting to vehicle…” and “Initiating charging…,” my charging session began. It also said that my charging was complimentary on behalf of Electrify America, which may have been because it was a new station. I’m not sure, though I should note that either way, the charging would have been paid for by Ford because this was a press loaner vehicle and a corporate FordPass account.

I was able to keep an eye on charging status through the in-vehicle screens, as well as through the FordPass app I installed on my iPhone.

When I was finished charging—I was already at 75% when I started so I wasn’t getting anything close to 150kW because charging slows as the battery becomes more charged—I got out of the Mach-E, pressed the button next to the charging port on the car, and returned the charging cable to its stand.

It was literally easier than pumping gas because I didn’t need to take out a credit card and swipe it or do anything other than attaching the charge cable. This is what every charging experience needs to be, for every EV. And it is, I should note, exactly what charging has been like at Tesla’s Supercharger stations for years.

But while Tesla has figured out the importance of seamless charging, the rest of the industry still has some work to do. There is a plug-and-charge standard that hopefully everyone—carmakers and charging networks alike—will soon embrace, which will go a long way toward simplifying the EV ownership experience. That’s key to widespread EV adoption.

“The opportunity therefore exists to create a global charging platform that is locally relevant and perhaps one in which there are no limits or location barriers to where and how much you fuel up,” Virk said. “While we’re not going to get there tomorrow, it is possible if the right players come together with the right resources, investment and singular focus on achieving shared success.”

Let’s hope it happens. But, in the meantime, you can make some friends while you’re charging. A Mach-E owner, this one with just 800 miles on his car, showed up to charge while I was there. He said he doesn’t have the ability to charge at his apartment complex, but thanks to the Electrify America fast chargers, he doesn’t have to. Instead, he comes and charges up his Mach-E once a week, and that satisfies his range needs without issue.

Maybe this charging thing isn’t so hard after all.

Be in the know about smart cities, AI, Internet of Things, VR, AR, robotics, drones, autonomous driving, and more of the coolest tech innovations.

Tags:  how to reset smart lock on au falcon