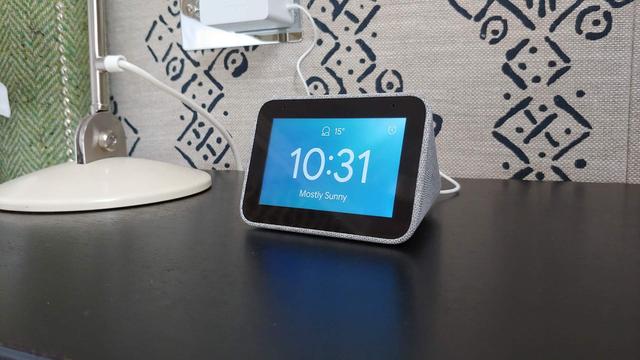 Being able to see as well as hear the information being issued by a voice assistant can be very handy, so it’s no surprise that there's a wide array of smart displays on the market, which elevate the best smart speakers with the inclusion of a screen, too.

Both Amazon and Google offer a range of different screen sizes when it comes to their smart display ranges, but there are also some smart displays available from other manufacturers, such as the Facebook Portal and the Lenovo.

Even at full retail price, though, it’s cheaper than the Google Nest Hub (2nd generation) and only slightly more expensive than the Amazon Echo Show 5, both of which are viable smart displays for your bedside table.

The Lenovo Smart Clock wants to smarten up your traditional alarm clock, but really, it’s more than that. It’s a cheap way to get a Google Assistant smart home speaker adorned with a clock face on it and a special 'Good Morning' dashboard into your bedroom.

You could of course put it anywhere in your house, but the AI-powered speaker is ideally meant to sit on a nightstand, as its has a small 4-inch touchscreen that displays the time with various clock faces. It has a screen resolution of 480 x 800 pixels, which is adequate for what it’s trying to show at such a small size.

Designed to sit next to you in bed, you’ll likely be close to it when using it, so we didn’t find its diminutive stature a problem. If anything it was a bonus, making it more discreet in a bedroom where you’re unlikely going to want overbearing tech to intrude. You’ll likely want a larger-screened smart device for other rooms though.

Like the Google Nest Hub (2nd generation), there's purposefully no camera built in, and that’s actually being touted as a feature here. Lenovo wants you to feel comfortable bringing this into the more intimate rooms of your home, and senses that the presence of a camera could undermine that. Personally, however, we’d have still welcomed having a camera onboard – albeit with a physical shutter included to block it off when we don’t want it peeping. Choice is always best. 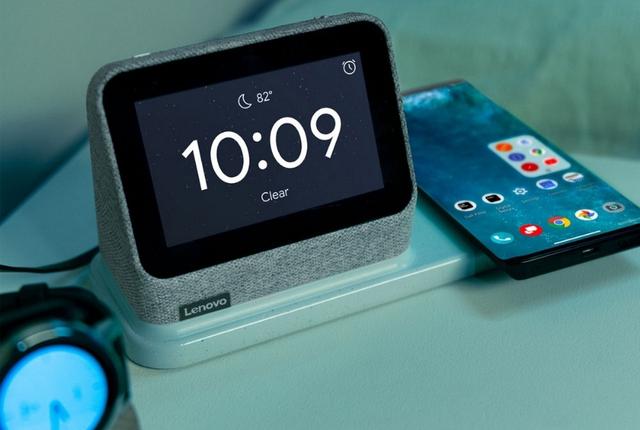 The Lenovo Smart Clock is extremely compact measuring3.14 x 4.48 x 3.12 inches / 7.98 x 11.39 x 7.92 cm ( w x h x d) and has a subtle wedge-like shape, covered in a grey fabric mesh. A chunky border surrounds the screen, curving off the edges, but taking up a fair amount of real estate on the device’s front face. Up top, a plus and minus sign offer volume controls. There's a microphone mute switch on the back (which, somewhat counter-intuitively announces itself very loudly when in use), with a port for power and a USB port.

Why is there a USB port on this thing? To charge your phone at night. This way, you're not losing a precious outlet behind the nightstand to your phone charger. It’s worth noting though that this isn’t a particularly fast charger, so you may still want to keep your mobile device’s standard-issue plug handy. Still, it’s useful if you just want to give some constant juice to a phone, tablet or ereader while in bed.

6W speakers are inside too. That’s not shockingly loud, but that’s not really a problem given the device’s purpose. Sure, you’ll need another speaker if you want to have a real party in your bedroom (ahem), but if it’s just for listening to news reports, podcasts or the odd tune here or there, it’s fine. It’s a clear speaker, and the Google Assistant always rings out when it responds to your requests.

Yes, it’s a clock. Yes, it’s an alarm. But that ‘Smart’ bit of the Lenovo Smart Clock’s moniker is what sets it apart. It may be small, but it offers access to Google Assistant, and most of the tasks you'd expect the voice assistant to handle on your behalf.

Want to set a reminder? Just say ‘OK Google’ and ask the Smart Clock. The same goes for timers or alarms, or to play any song from your music streaming service of choice. Ask a question, get an answer, make a request and so long as its solution is web-based, there’s a good chance that the Google Assistant will be able to fulfil it.

If you’ve got smart home devices in your property, like smart lights or smart locks, they too can be controlled by voice, and using the Google Home app you set up routines that trigger several smart home devices at the same time when just one phrase, such as Goodnight, is uttered.

With a smaller screen than any Google Assistant smart display that’s gone before it, the Lenovo Smart Clock uses a tweaked interface compared to other Google-powered devices like the Nest Hub. It’s basically a lot more stripped back – while key screens like calendar, weather, and alarms offer rich visual feedback to accompany the Assistant’s audio responses, elsewhere you’re presented with just a pulsing Google Assistant logo.As we've already mentioned, while the Lenovo Smart Clock has a screen - you can't do everything that other smart display offers. For example; there's no support for watching Netflix or Disney+ and you can’t use the smart display as a way to show off digital snaps either.

That said, the Lenovo Smart Clock works a treat when it comes to the tasks its designed for. Its microphones easily pick up our voice requests, and Google Assistant is smart enough to successfully answer the majority of our queries satisfactorily.

On top of that, we were impressed that not only can you tap the Lenovo Smart Clock to stop your morning alarm, but you can simply say “stop” too – no ‘OK Google’ wake word needed. With the alarm ringing, the Clock simply keeps an eye out for the pertinent ‘Stop’ command too, as it’s unlikely that you’re going to be referring to anything else. Finally!

There’s also the Sunrise Alarm feature, which slowly raises the brightness of the screen over the course of the 30 minutes leading to your sonic alarm going off. This should in effect help you wake more naturally – but it’s not as effective as the best SAD wake-up lamps whose feature it apes.

It simply doesn’t go bright enough to envelope a room with sunrise-imitating light. That said, on the reverse end of that scale, the Smart Clock’s ambient sensor dims the light expertly at night time – dark enough to not distract, but with its text just visible enough to read with no lights on as you open your groggy eyes.

Should I buy the Lenovo Smart Clock

You want to make video callsWith no built-in camera, the Lenovo Smart Clock can't be used for video calls, or audio calls if you're in the UK.If this is a priority for you, then it's best avoided

You want to watch TV and moviesSimilarly, while this smart display has a screen - it doesn't offer support for movie streaming services like Netflix and Disney+, unlike other Google Assistant-enabled smart displays.