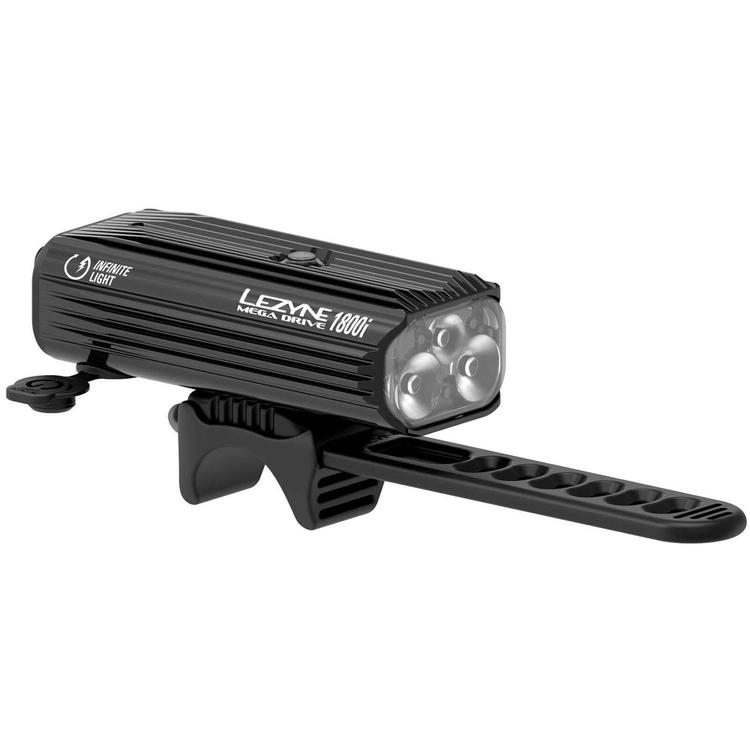 Lezyne's Mega Drive 1800i front light offers a large amount of power and some potentially useful smart functionality as part of the company's Smart Connect range. As a self-contained, full-night-time-beam front light, it's a very good piece of kit.

The Mega Drive 1800i is Lezyne's most powerful standalone front light. As the name suggests, it can put out 1,800 lumens from its three LEDs arrangement, achieving that number in its Overdrive mode.

When you're riding on pitch dark roads at night, that mode is able to floodlight the road ahead while giving useful peripheral vision, even when travelling at 30km/h or more. Lezyne says that its Tri-Focus Optics are designed to optimise the beam for faster riding, and I can't disagree. For road use, the beam is focused enough to not waste the lumens that it's putting out, yet any outcropping or roadside potholes (or the odd squirrel) are well illuminated with enough warning to do something about it.

Beyond that top setting, there are eight other modes that enable you to balance lumen output with battery life. The other static modes put out 1,000, 600, 250 and 15 lumens, while three flash modes and a pulsing mode complete the choice. Notably, the Day Flash setting shoots out 600 lumens in sharp bursts, which is (in my opinion) the most usable of the three if you just want one flash mode that is most likely to help you be seen, day or night.

I'm not sure I need the choice of two other flashing frequencies at 150 lumens (one would do), nor can I see too much use for the pulsing mode unless you were riding through dense fog and wanted some kind of variation of light output without it reflecting back too distractingly. That said, having the options allows you more than enough flexibility to choose a setting that works for you.

If you don't want or need that flexibility and prefer a simple choice of high or low beams then you can press and hold the power button for five seconds when the light's switched off, and it'll engage what Lezyne calls Race mode, which essentially gives you a choice between the Overdrive setting and a lower powered mode.

One of the upsides of having a larger body in a light is that there's more space for the battery. That's good news considering the 1,800-lumen max output from the three-LED array, and here you get a claimed 1:40hrs burn-time in Overdrive.

Although the light will dim the output when it senses that it's overheating, I found this to be quite accurate, with the battery life lasting closer to two hours when I forgot to switch the light back up to the highest level again.

Arguably, the bigger upside is the battery life you get on the 1,000-lumen or 600-lumen settings, which last for their claimed 2:30hrs and 3:50hrs respectively. For me, these settings became my go-to options when the light faded and I needed a constant beam to light the way but didn't want to be burning through that battery too quickly. They're more than powerful enough for most road usage cases, and if you do happen to need to ride fast in pitch black, you've always got that Overdrive mode to get you through.

The body of the light is made of black-finished aluminium. It's a smart-looking light, like the vast majority of Lezyne's diverse range. It comes with pronounced machined ridges to assist with cooling, but it can still get hot when the top two modes are left on for a while. When you come to the end of your ride having used those, it's worth leaving it alone for a few minutes to cool before trying to remove it for charging.

That construction adds up to a fairly hefty 253g weight, which is definitely noticeable when mounted on the handlebar. It also stands quite proudly, with Lezyne's standard light mount. Both of these things I got used to after a couple of rides, but fans of tidy cockpits might want to think about mounting it to the underside of their dual head unit/GoPro mount with an adapter.

The mounting system is easy to fit and remove, although when mounted to an FSA Gossamer handlebar I found the strap slightly too loose on the tightest setting I could get the rubber band to stretch to, so whenever I rode over lots of lumps and bumps, the light would gradually move until it was pointing further down towards my front wheel.

On to the 'i' portion of this light's name... It indicates its ability to pair to Lezyne's SmartConnect suite, which is made up of a number of enabled front and rear lights, and its LED Ally app.

Connect the light to the app via Bluetooth and it enables you to select the modes that matter most to you (up to four of them), and control which order you cycle through them using the single power button. You can also do this from the app, as well as switch it on and off.

It's worked seamlessly for me in testing, although I can't say I've found it essential. You can pair one of Lezyne's SmartConnect-enabled KTV rear lights with it, and the ability to switch both on and off together and in certain chosen modes could add a little extra convenience if you have a bike you always use them on.

> Buyer’s Guide: 10 of the best rear lights for cycling

Lezyne says that there is a daylight sensor on board the Mega Drive 1800i, although currently its awaiting a firmware update (via the app) before it gets pressed into service.

The Mega Drive 1800i also comes with some added features that make it suitable for even longer rides, thanks to its ability to connect to an Infinite Light Power Pack, which Lezyne claims can double the run-time, as well as be controlled by a remote.

The power pack comes as part of the deal if you buy the light with Lezyne's 'loaded' kit.

The Mega Drive 1800i is by no means cheap, costing £160. It's often difficult to compare lights with high lumen ratings side by side – there are lots of other factors that come into play. Our beam testing engine will give you a great comparison between models, but the Mega Drive 1800i arrived after the last round of batch testing.

As with most things, whether the Lezyne is worth the money to you will be driven mainly by how it performs in the metrics that matter most to you. Something like the Ravemen PR1600, for example, might appeal at £139.99, or the Magicshine Ray 2600 Smart Remote Bike Light for only £114.

Overall, the Mega Drive 1800i is a high quality design, with enough power and features to make it suitable for the vast majority of road riders looking for a high lumen output front light.

If you're thinking of buying this product using a cashback deal why not use the road.cc Top Cashback page and get some top cashback while helping to support your favourite independent cycling website

Tell us what the light is for, and who it's aimed at. What do the manufacturers say about it? How does that compare to your own feelings about it?

Lezyne says: "The Mega Drive 1800i delivers up to 1800 lumens of output for serious night riding. Its output is optimized by our Tri-Focus Optics, which creates an ideal beam pattern for high speed. It's constructed from machined aluminum with built in cooling fins that improve its overall performance. With seven output modes, an Auto Day/Night sensor and optional features such as our Smart Connect System and Remote Switch compatibility, this light is super versatile. The light is micro-USB rechargeable and it can run for up to a massive 148 hours on a full charge. Additionally, it's compatible with our Infinite Light Power Pack that can double the battery runtime. A versatile strap secures it to all common handlebar sizes and it's available in Lite Grey or Black."

Tell us some more about the technical aspects of the light?

I couldn't get the strap tight enough to make the light sit 100% firmly.

Rate the light for waterproofing. How did it stand up to the elements?9/10

No complaints. There are a couple of ports on the body, but these are well covered.

Impressive battery life given the brightness. Recharging takes 4.5hrs from a high powered socket, and 9hrs from a USB bus, but that's okay given the capacity.

Undoubtedly it's a heavy light to perch on your road bar, but you soon dial out that feeling.

Tell us what you particularly liked about the light

Tell us what you particularly disliked about the light

Large size on road bars, plus it's heavy, and the strap looseness.

How does the price compare to that of similar products in the market, including ones recently tested on road.cc?

Magicshine's RN 3000 Front Light puts out a whopping 3,000 lumens on paper, but Mike found that littered with issues and gave it a 4/10 rating despite its relatively low price of £139.99. He also reviewed the 2,000-lumen Light & Motion Seca Comp front light, awarding it 8/10 – again, not perfect, but it does cost £95 more than the Lezyne.

Did you enjoy using the light? Yes

Would you consider buying the light? I'd consider it, but I'd probably opt for a smaller unit that puts out an adequate 1,000 lumens for my use.

Would you recommend the light to a friend? Yes, if they need this much power.

Use this box to explain your overall score

A very good, high-powered, self-contained front light with some nifty features. Not without fault, but overall very good.

I've been riding for: Under 5 yearsI ride: Most daysI would class myself as: Expert

Tags:  where is the smart lock light flashing