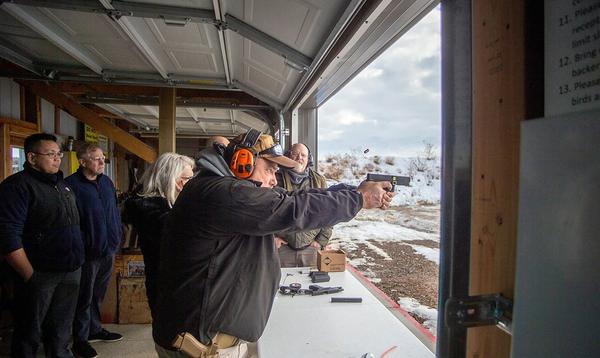 U.S.A. -(AmmoLand.com)- There is a media blitz afoot, pitched by developers of authorized user recognition technology equipped firearms; what the media refers to as so-called, “smart guns.” Several of these companies herald that this is the year when they will finally bring their product to market. It might be a little premature to start popping corks, though.

Despite reports praising companies preparing to launch options for consumers, and polling showing Americans may be open to considering this concept, one critical question remains: Are buyers willing to risk their life on authorized user recognition technology?

So long as the answer from firearm purchasers remains “No,” retailers will not sacrifice shelf space for an unreliable product consumers don’t want to buy.

“After decades of delays and controversy over smart guns, 2022 could be the year that the new weaponry is brought to market.”

The article reports Americans are “interested” in “smart” gun technology and “support the development” of the firearms. Less than half, 43 percent, of those surveyed say they are “very interested” or “somewhat interested” in personalized guns equipped with authorized-user technology, while more than half, 54 percent, aren’t. NSSF’s polling in 2019 showed that just five percent said they were inclined to purchase a so-called “smart gun” with 70 percent saying they still had concerns about reliability.

Firearms equipped with authorized-user technology involves adding electronics that in theory only allows a gun to be fired by a verified, authorized user after unlocked by using either a fingerprint, a pin code, or through embedded field communication (RFID) connected to a smartphone or other Bluetooth device. Firearm owners know that guns must work as designed each and every time. There’s no room for failure. Adding in electronics to guns adds points of failure and could have horrific consequences for those who rely on them for self-defense.

LodeStar Works Inc. is one developer working to hit the market this year. President and CEO Gareth Glaser is hopeful. Glaser said, “It’s been around a long time now. Everybody uses one form or another of authentication technology on their smartphone.”

The problem for developers lies in the fact that support for “technology development” does not equate to, “I will buy a smart gun.” Not to mention a firearm is incomparable to an iPhone or Bluetooth speaker. Phones and guns are completely different products and equivocating them is beyond tone-deaf to the firearm market that has seen elevated sales largely driven by concerns for personal safety. If the facial or fingerprint recognition on your iPhone doesn’t recognize you, you’re inconvenienced. If your firearm doesn’t unlock in a time of need, you could be dead.

The hype for “The Year of the Smart Gun” began early. Leading up to SHOT Show® 2022 in Las Vegas, these new companies were pitching their products as the “hot” new thing.

“Exclusive: Smart guns finally arriving in U.S., seeking to shake up firearms market,” read a Reuters headline. “‘Smart Gun’ Companies Aim For 2022 Commercial Release,” said another. “Are ‘smart guns’ finally arriving in the U.S.? Here is what we know,” was the headline from The Deseret News. The article began, stating as fact, that “Smart guns…will finally become available to American consumers after decades of questions regarding reliability.” 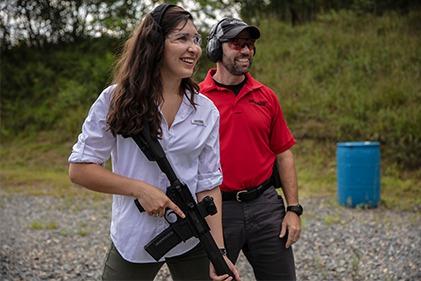 The Reload was the most measured and accurate. “‘Smart Guns’ Come to the Industry’s Trade Show Amid Hype and Skepticism.”

The history of this technology is not one of success, including hacked and failing test runs. A demonstration by LodeStar prior to SHOT Show 2022 failed too. A demonstration to show off the technology to shareholders shows an individual loading, chambering, and clicking the fingerprint keypad on the side of the 9 mm handgun equipped with the authorized-user technology.

“Alright, ready? Everybody got ears? Alright. Two rounds coming,” he says before firing. Only one round successfully fired while the demonstrator is visibly seen and heard pulling the trigger multiple times for the remaining round before the video abruptly ends. That’s during a controlled test under ideal conditions and in front of the media.

Gareth described LodeStar’s $895 public model, saying. “We finally feel like we’re at the point where … let’s go public. We’re there.” A second “smart” gun manufacturer, SmartGunz LLC, is offering a $1,700 model for law enforcement and a $2,200 model for public consumers. During the span of COVID record firearm sales, firearm industry survey data pegged the average purchase price consumers paid for their firearm at less than $600. SmartGunz exhibited at the SHOT Show but didn’t display a working prototype. SmartGunz claims it will be equipping an unidentified law enforcement agency with its product, to test its reliability. We’ve seen other developers go that route only to have the prototypes quickly pulled from the field.

Testing reliability on law enforcement is interesting since the concept of “smart guns” was to reduce officers being shot by their own firearm in a struggle where they lose control of the gun. In the 1990s, the Sandia National Laboratory surveyed law enforcement about their needs in a smart gun. Cops said the number one issue was reliability under all circumstances. The firearm must work when they need it to.

LodeStar believes Americans would prefer to purchase their gun and forego purchasing a handgun safe to go with their normal, reliable firearm. That advice, though, runs counter to what the firearm industry and firearm safety experts advocate. All firearms not in use should be locked and beyond the reach of those who shouldn’t have access to them. That also runs counter to laws in some states, including Connecticut, which requires firearm owners to lock their firearms in the home.

Glaser told Morning Consult the $900 price tag is only, “marginally more expensive than buying a regular firearm and a biometric safe to store it in.” Either he has faith buyers will shell out an additional $300 minimum on a gun safe or completely forego safe storage altogether.

To be crystal clear, the firearm industry doesn’t now, and has never, opposed the research and development of “smart” gun technology. What we believe is that the marketplace should decide if this technology is truly ready for market.

“Firearms are tools that are used in the defense of someone’s life and must work as designed each and every time. There is no room for failure,” NSSF’s Director of Public Affairs Mark Oliva told The Reload.

There are many issues surrounding this concept that I have discussed in the past. For a general overview of the subject, check out NSSF’s fact sheet.

What the industry opposes are “smart” gun mandates. President Joe Biden’s campaign website proclaimed his intentions on the fallible firearms, saying, he “believes we should work to eventually require 100% of firearms sold in the U.S. are smart guns.” Mandating that firearms must be equipped with so-called “smart” gun technology raises liability concerns for manufacturers. Manufacturers must know that the firearm will work as designed each and every time. The technology, so far, isn’t able to show that will work, when taking into effects electronics, chamber pressures, recoil, and the thousands of pounds of energy generated at the muzzle.

State-level efforts are also problematic. In 2002, New Jersey passed a law requiring that once a “smart handgun” is sold anywhere in the country, they will be the only handguns legal to sell in New Jersey. The supporters of this mandate later acknowledged the law set back research and development on “smart guns” by more than a decade. The law was rescinded in 2018, only to be replaced by a different mandate that requires New Jersey retailers to carry the product if it ever comes on the market. It’s important to note that none of the companies that have tried to bring a safe and reliable authorized user recognition equipped firearm to market – and many have tried over the past quarter-century – support mandates. They, like the firearm industry, believe the market should be allowed to work. If the considerable technological challenges can be solved and someone can bring a safe product to market, then consumers – not the government – should decide if that product meets their needs.

About The National Shooting Sports Foundation

NSSF is the trade association for the firearm industry. Its mission is to promote, protect and preserve hunting and shooting sports. Formed in 1961, NSSF has a membership of thousands of manufacturers, distributors, firearm retailers, shooting ranges, sportsmen’s organizations, and publishers nationwide. For more information, visit nssf.org