The impact of social housing on population in Ireland since 1911 | VOX, CEPR Policy Portal 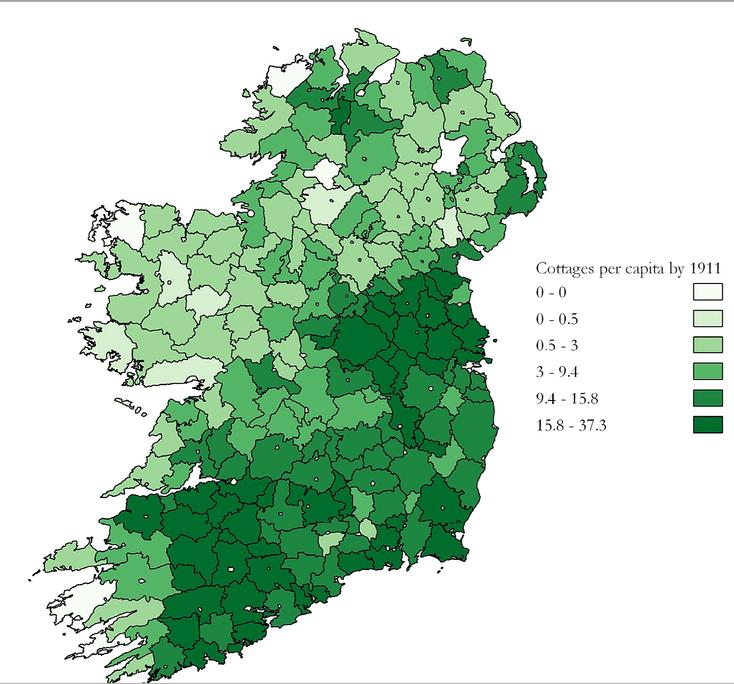 The world is becoming increasingly urban. The global population is expected to rise from 7.6 billion people in 2018 to 9.8 billion in 2050, with a nearly 60% rise in urban populations and a fall of around 9% in rural populations (UN-DESA 2018). This changing pattern of human and economic activity raises important policy questions around the sustainability of population redistribution and the achievement of the United Nations Sustainable Development Goals. While research highlights the economic benefits of urbanisation and agglomeration, there is a long tradition of policymakers attempting to stem the tide of urbanisation and rural depopulation. According to the United Nations, 75% of surveyed countries have adopted policies to influence the spatial distribution of their populations, with 55% employing policies explicitly aimed at reducing rural to urban migration (UN-DESA 2020).

Rural depopulation has long been a feature of economic development and plays an important part in the modernisation story of many countries. Although increasing population in both urban and rural areas accompanied early industrialisation, Europe’s rural population began to decline during the 20th century and even before in the early industrialising countries. Here, rural depopulation was already a prominent feature by the mid-19th century, when rural-out migration began to exceed natural growth (Collantes and Pinilla 2011). Ireland’s experience was particularly dramatic as the demographic disaster of the Great Famine of the 1840s unfolded over the rest of the century. Contemporary politicians were acutely aware of the problem and sought ways to arrest population decline, relieve poverty, and improve sanitary conditions in rural areas.

In a recent paper (de Bromhead and Lyons 2021), we examine what was regarded as the world’s first large-scale rural public housing scheme, designed to address rural conditions and population decline in Ireland in the late 19th and early 20th centuries (Bureau of Labour Statistics 1915). We examine how the provision of nearly 50,000 social housing cottages under the Labourers Acts shaped population change over subsequent decades. We do this by linking detailed data on the location of these heavily subsidised cottages for agricultural labourers, built between 1883 and 1915 in over 200 districts, to population data from decennial censuses between 1841 and 2002. We find that a higher density of social housing, which effectively halved rents for landless labourers, affected subsequent population change, with significant persistence in the effect over the course of the 20th century.

Despite the fact that housing problems were more acute in urban areas like Dublin, political conditions in Ireland meant that policy effort was focused on rural rather than urban areas. While the first Labourers Act was introduced in the 1880s, the provisions were limited. Local authorities could borrow from the central government to build cottages for agricultural labourers in their district. With rents for tenants capped at a low level and the local authority having to borrow from the central government with no central subsidy, many local authorities were either unwilling or unable to use local taxation to fund the provision of housing for their poorest citizens.

Under the much more generous 1906 Act however, 36% of the cost would be met by UK taxpayers. The money that local authorities had to borrow was over a longer period (nearly 70 years rather than 50) and at a much lower interest rate (3.25% rather than 4.5%). The new terms were generous enough that many rural districts could make a profit on the scheme. As a consequence, the building of labourers’ cottages increased significantly.

To assess the impact of this policy on population, we collect information on the Labourers Acts for the 213 rural local government districts (LGDs) from returns made to the House of Commons. For example, the House of Commons (1911) return included the number of cottages built by district, to that year, as well as information on legal and other costs. Similar information was collected from returns made in previous and subsequent years. We then compile figures at the LGD level – on area, valuation of real estate (for tax purposes), housing stock, and other information – from the 1911 Census of Ireland and other contemporary statistics (Clarkson et al. 1997, Gregory et al. 2013). We link these data to population data from each census year, 1841 to 2002 (Kelly and Fotheringham 2011).

The distribution of cottages per capita built by 1911 across Ireland can be seen in Figure 1.

We exploit the panel nature of our population data to assess the impact of the provision of labourers cottages, taking a dynamic difference-in-differences approach. Figure 2 shows the relationship between cottages built per capita by 1911 and population from a dynamic difference-in-differences specification with and without controlling for a linear pretrend. These coefficients suggest a positive and significant relationship between cottages built and population over the 20th century. Importantly, there is no evidence of a positive pretrend before 1911.

Next, we test the robustness of this relationship to the inclusion of further control variables and alternative specifications, focusing on population change in the post-treatment period, 1911 to 2002, and find that the relationship remains. We find that one-standard-deviation increase in the number of cottages built per capita by 1911 is associated with +0.27 of a standard deviation in population growth from 1911 to 2002. A causal interpretation of our findings is supported by a placebo test that considers the unexpected ending of the construction of cottages as a result of the outbreak of WWI, and by an instrumental variables approach that exploits a 1906 limit on legal costs.

Through which channels might the provision of social housing have influenced population changes? Firstly, the generosity of the scheme meant that rents were effectively cut in half, increasing the opportunity cost of out migration. In the context of rural population decline, the policy may have reduced migration among agricultural labourers, a group with a high propensity to migrate. The dynamics of chain-migration and disagglomeration, through communities that were maintained, may even have created spillover effects that amplified the direct impact of the policy. However, another potential mechanism that likely played a role was the provision for tenant purchase that was initiated in an independent Ireland from 1936. The 1936 Labourers Act facilitated tenants of cottages built under previous Labourers Acts to purchase their homes at a significant discount. Initially, purchase annuities were set at 75% of pre-purchase rent, before being further reduced to 50% of pre-purchase rents in 1951 (Norris and Fahey 2011). The success of this policy is evident in the fact that 80% of cottages built under the Labourers Acts were owner occupied by the mid-1960s (Norris 2016).

In Northern Ireland, the fate of cottages built under the Labourers Acts was different. Despite some limited provision for tenant purchase of labourers’ cottages in Northern Ireland, only 348 cottages were sold before the decision was made to formally facilitate the process in 1975, nearly 40 years after similar provisions were made in Ireland (House of Commons Debates 1975a, 1975b). We exploit the creation of the Irish border in the 1920s and the differential treatment of labourers’ cottages as a natural experiment, finding evidence to support the idea that tenant purchase increased the effectiveness of the policy.

Our research suggests that the provision of social housing played a part in reducing rural depopulation in Ireland. However, it was unable to arrest the decline entirely as Ireland’s rural population continued to fall across the 20th century before recovering from the 1970s. Nonetheless, it seems that the vision of one of the principal architects of the scheme, the Irish MP D. D. Sheehan, was at least partially realised: “For every house you build, you are keeping a family in the country and rooting them to the soil. The labourers in this matter owe their salvation to themselves and to their organisation when they won the Labourers Act of 1906. The transformation effected in rural Ireland has been of the most marvellous kind” (House of Commons Debates 1911). 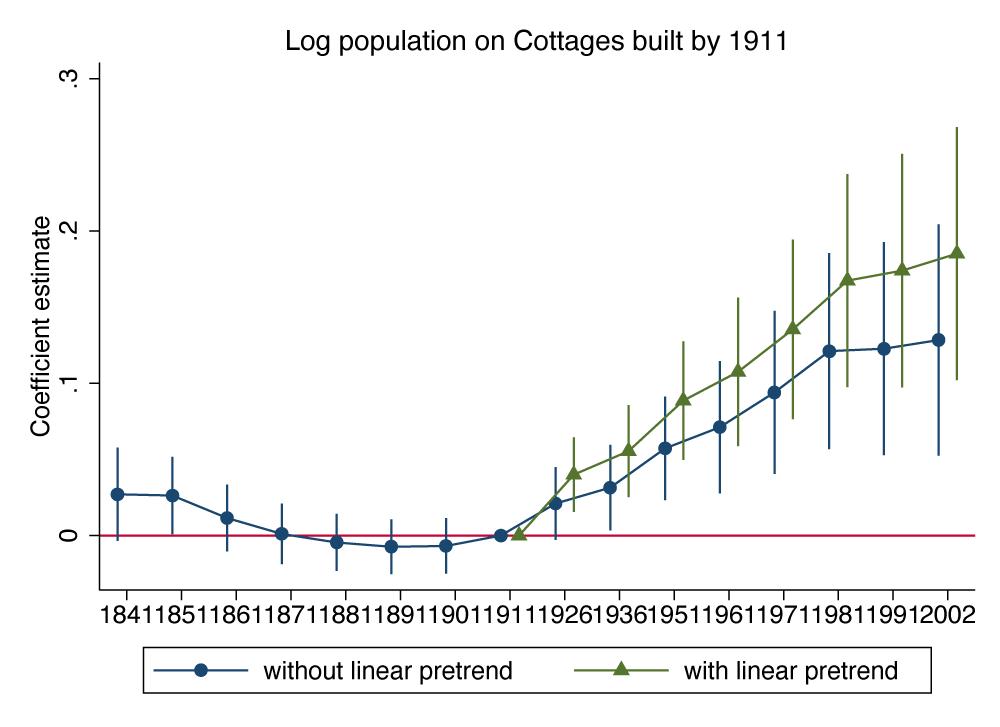 More generally, our results speak to the ‘people versus place’ policy debate and show that policies that are place-based in nature can work, albeit in this case at a significant cost to UK taxpayers. However, the intervention we study was arguably both people and place-based, given it was aimed at certain types of occupations and income ranges. Our findings also raise other important questions. Ireland remains one of the least urbanised high-income countries in the world, with consequences in agglomeration economies foregone. The scheme may have contributed, along with other factors, to this hidden cost in Ireland’s economic development (Kenny et al. 2021). Indeed, the potential for social housing policy to reduce migration and ‘lock-in’ population in potentially inefficient ways has been recently highlighted (OECD 2021, Cauasa et al. 2021). The scheme may also have affected other outcomes, including public health and political voting preferences, raising questions about the broader effects of interventions that affect the quality and cost of housing. These additional consequences – intended and unintended – are what we aim to explore in future research.