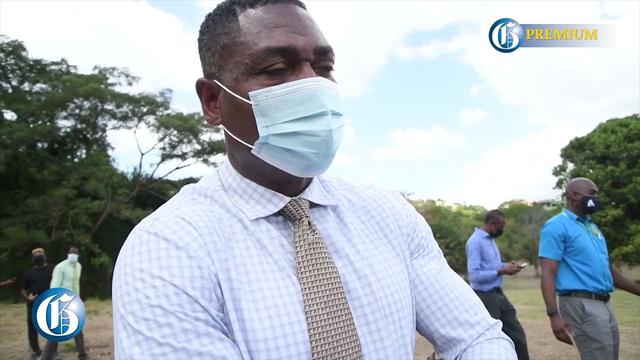 A new round of supply lock-offs could begin as early as this Friday as the National Water Commission (NWC) moves to manage rising global energy costs which are being exacerbated by the Russia-Ukraine war.

Describing the oil market as volatile, NWC President Mark Barnett revealed that, on average, energy cost for the public water provider had soared almost 30 per cent over a three-month period, overshooting the monthly projection of around $750,000.

The NWC’s energy consumption bill for December, one of the year’s highest usage periods because of holiday festivities, was $1.06 billion, Barnett disclosed in aGleaner interview on Tuesday at the ‘More Trees, More Water’ initiative tree-planting ceremony at the Mona Reservoir in St Andrew.

Electricity consumption fell in January to $950 million, while its bill for February stood at $940 million.

Those mounting costs have concentrated the minds of the water provider’s executive management, which is undertaking proactive measures to lower its production and maintenance expenditure.

Headlines Delivered to Your Inbox

Sign up for The Gleaner’s morning and evening newsletters.

The company is still fine-tuning the list of communities that will be affected by water lock-offs as well as the periods of production shutdowns.

“We have to be strategic about those activities. We have to be mindful of the various industries, social institutions, hospitals, schools in session, etc … . So more than likely, what we are thinking of, and what will be done, is a shutdown during the hours when there is no real consumption, which is usually at nights,” he said.

That puts the lock-off period, potentially, between 10 p.m. and 5 a.m.

The president cautioned that he could not project when the lock-off policy would end, saying that market conditions would be monitored. 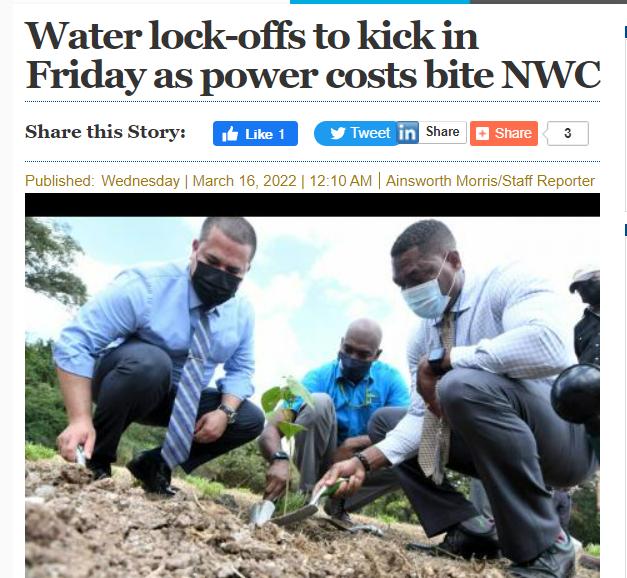 “It may improve, it may get worse. We see where fuel price has reduced, but again it’s a volatile situation for us,” said Barnett, referencing the roller-coaster fall of global oil prices to just below US$100 a barrel from more than US$130 a week ago.

The light and power company notes that Jamaica is heavily dependent on imported oil and natural gas for the production of electricity as well as for transportation and manufacturing.

Barnett sought to assuage consumer anxiety on Tuesday, emphasising that the NWC did not want to deprive its customers of supplies.

“It’s really a proactive measure to help contain my own cost, knowing very well that certain costs that are incurred are external and it is not something that I have much control over or any control, really,” Barnett said.

The NWC cannot unilaterally increase water rates, as its requests for hikes are subject to approval by the state-run Office of Utilities Regulation.

However, bills comprise a Price Adjustment Mechanism (PAM) that allows for the recouping of “certain costs three months down the road”, said the NWC president.

Barnett reiterated that the company has tapped renewable-energy solutions, including the commencement of work on a photovoltaic system at the Forest Hills relift pumping facility that serves Red Hills and its environs.

But it appears that the NWC has not undertaken major energy investments on a broad scale nationally to curb its dependence on traditional sources of power.

“It must be underscored that the NWC has been implementing several measures that are aimed at cutting its energy costs. These include the use of renewable energy sources for the Portmore commercial office in St Catherine, the Hamilton Garden Wastewater Treatment Plant in St Catherine, and our Oxford Road office in St Andrew,” he said.

“Other long-term alternative energy solutions are all part of our medium- to long-term operational plan in addressing our energy costs.”

To mark World Water Day on March 22 this year, the NWC is embarking on the ‘More Trees, More Water’ initiative. As part of the project, its employees are being encouraged to plant trees at the NWC’s facilities, as well as at their homes and in their communities.

Trees help to capture rainwater and reduce the risk of natural disasters like landslides and floods.

Trees also help to block and slow down the flow of run-off during storms, heavy rains, and hurricanes. In addition, trees stimulate rainfall and also help to limit erosion, which can affect water quality and quantity.