Best Sports Streaming Services for Cutting the Cord in 2022 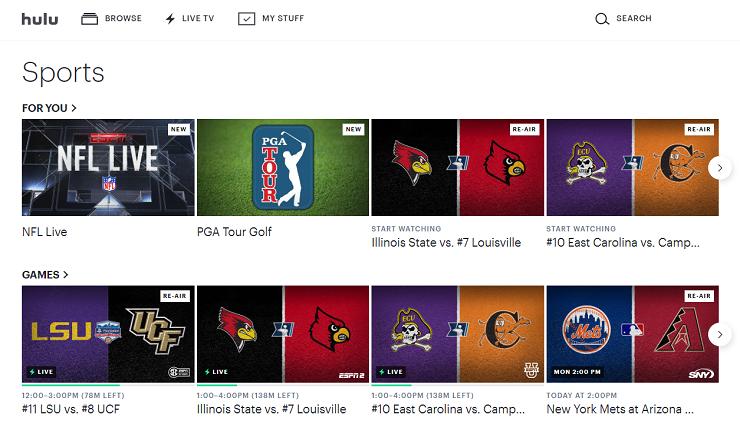 In the early years of online streaming, viewers had far fewer options for watching live events than they did for watching TV shows and movies. Thankfully, that’s no longer the case; in 2022, sports streaming services abound, and you’ve got more than a few options for watching baseball, football, basketball, combat sports, golf, racing, and more right on your smart TV or mobile device. If you’re looking for the best sports streaming service to round out your entertainment setup, we’ve got an in-depth rundown right here that lays out the different platforms available, what you get with each one, what they cost, and how you can get the most for your money.

ESPN is the most well-known sports broadcaster in the U.S., so it’s no surprise to find it at the top of our list of the best sports streaming services. ESPN+ is the broadcaster’s premium streaming platform which was launched in 2018. Not intended to be a full substitute for ESPN’s TV channels (cord-cutters might want to look into something like Hulu with Live TV or Sling TV for that), ESPN+ is instead an online-only platform that makes it easier to stream sports like baseball, MMA, gold, international soccer, college sports, and more, with some limitations.

Nonetheless, ESPN+ delivers a staggering amount of sports content all by itself. You can watch PGA golf tournaments, Major League Baseball games, college sports, NHL hockey, and more. It’s also the best way to live stream UFC fights and is the only place where you can watch UFC pay-per-view events. Along with live sports coverage, press conferences, interviews, and expert analysis, ESPN+ is home to plenty of exclusive shows and documentaries, such as the critically acclaimed 30 for 30 series. One notable absence is the NBA, and you can also only watch select NFL games on ESPN+.

ESPN+ costs $7 per month or $70 per year, but you have another option: the Disney Bundle. This includes ESPN+, Disney+, and basic Hulu for $14 per month, which saves you 35% and basically gets you ESPN+ for free. After you sign up, you can install the ESPN+ app on most smart TVs, streaming sticks, mobile devices (iOS, Android, and Amazon Fire), and Xbox and PlayStation gaming consoles. You can also stream ESPN+ right in your computer’s web browser. ESPN+ is now included in Hulu with Live TV, which features ESPN and ESPN 2 channels as well. If you’re after a complete cord-cutting solution for replacing your cable subscription, that’s another option — but more on that later.

If you’re looking for a more complete streaming package rather than a standalone app like ESPN+ — more specifically, if you want what might be the cheapest streaming TV plan that includes sports channels — then Sling is the one. Sling TV offers two plans, with the Sling Orange tier featuring three ESPN channels and the Orange plan featuring Fox, NBC, and the NFL Network. Both include TBS and TNT as well. Sling Orange and Blue are each $35 per month, but you can combine them into the Orange & Blue plan for $50 per month and get everything. That’s the best value and the best way to get the widest sports coverage that Sling offers.

If you’re looking for a cheap way to cut the cord and get rid of cable, then Sling Orange & Blue is a strong recommendation for the best sports streaming service and it’s still cheaper than most other TV streaming packages which typically cost $65-$70. However, Sling doesn’t have as many channels (you get 50 with the Orange & Blue tier), although that’s actually a good thing if you’re not looking to pay for extra channels you’re never going to watch. You can stream on one device with the Orange plan, but the Blue and Orange & Blue packages allow for up to three simultaneous streams.

The Sling app works on most modern streaming devices including smart TVs, streaming sticks, mobile devices, computers (via web browser), and the Xbox Series X and Series S gaming consoles — there’s no PlayStation app support as of yet, sadly. Sling is almost always running some sort of free trial offer, so you can always give it a spin before you commit. There are subscription add-ons available as well, including 10 additional sports channels with the $11/month “Sports Extra” package and premium channels such as Showtime and Starz.

Hulu with Live TV is a strong contender for the best sports streaming service, and it might just be the best streaming TV package out there now that it includes the Disney Bundle (which was formerly a premium-add on). For $70 per month, not only do you get more than 75 live TV channels, but you also get the entire library of shows, movies, and exclusive original content from Hulu and Disney+. You get ESPN+ as well, rounding out your sports streaming loadout and giving you pretty much anything you need to watch all the sports you follow. 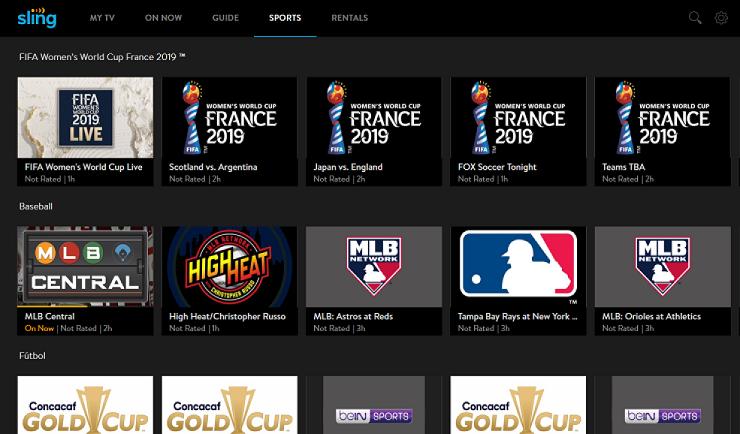 Just a selection of live sports you can watch after signing up for Hulu with Live TV includes NBA and NFL, filling two of the gaps that ESPN+ alone has. But since you get ESPN+ too, that fills up some important gaps itself, such as UFC live streams and pay-per-view events. You can also stream NCAA basketball, NHL games, English Premier League soccer, and much more. Since Hulu with Live TV is a full-featured cord-cutting solution designed to replace your cable subscription, it includes plenty of other channels like CNN, Fox, NBC, ABC, CBS, FX, Comedy Central, and many others. Premium add-ons like HBO and Showtime are available to add to your plan.

Hulu with Live TV is the largest and most comprehensive bundle on our list, and if you’re after the best sports streaming service that can replace your cable while also giving you on-demand access to a myriad of movies, shows, and exclusive series like The Book of Boba Fett, this package is our top recommendation. It’s also the most expensive, but for the sheer amount of content you get, we think Hulu with Live TV is a good value and very much worth the price if you’re an avid streamer looking to cut the cord.

When it comes to the sheer number of channels you get, Fubo is hard to beat. It’s perhaps the best sports streaming service and TV package for families thanks to its great channel selection, generous cloud DVR capabilities, and the number of simultaneous streams it allows you to have. You can watch three streams at a time with the basic Starter plan, but if you upgrade to the Pro or Elite tiers, you can watch as many as 10 streams at a time — plenty of screens for the whole family.

With the Fubo Start and Pro packages, you can enjoy 110 live and on-demand TV channels featuring popular shows, news, and — of course — sports. The Elite plan upgrades you to more than 160 channels. Fubo’s selection of sports content is broad as well: NFL, NBA, MLB, NHL, NASCAR, Premier League soccer, golf, boxing, college sports; it’s all there at your fingertips. That includes live coverage of events like the Super Bowl, World Series, NBA Finals, Stanley Cup Playoffs, and the Olympic Games as well.

Fubo TV plans start at $65 per month for the Starter tier. The $70/month Pro package has the same number of channels as the Starter plan (110) but gives you four times the cloud DVR storage and allows for viewing on up to 10 screens simultaneously. The $80/month Elite tier gives you an additional 53 channels. Along with its great channel selection, Fubo also offers select content and certain live events in 4K Ultra HD.

NBC is one of the major sports broadcasters in the U.S. along with Fox, CBS, and ESPN, and it recently launched its own premium streaming service called Peacock. It’s a great (and cheap!) way to stream sports as well as new and classic NBC shows including The Office and Parks and Rec, along with live news, movies, and exclusive Peacock originals.

For streaming sports on Peacock, you’ve got a decent amount to choose from. Live games are somewhat limited as Peacock only covers NBC’s broadcasting rights, although you do get the NBC Sports channel included with your free account. PGA Tour, Premier League soccer, WWE wrestling, motorsports, the Olympics, and Sunday Night Football are the highlights of what you get with Peacock Premium. For full access to things like NFL and NBA games, though, you’ll still want to sign up for a more complete TV plan like Sling, Hulu with Live TV, or Fubo — you won’t get everything with Peacock.

The trade-off here is the price. One great thing about Peacock is that there’s a basic free plan available, so you can give it a spin and watch plenty of content without paying a dime. However, you’ll still need to sign up for Peacock Premium to get access to everything the platform has to offer, but starting at just $5 per month, it’s the cheapest service on our list (and you can upgrade to ad-free Peacock Premium for $10 per month, which is still a pretty good deal).

Prime Video isn’t a platform known for sports, but if you already have Amazon Prime, you might be surprised to learn that you can indeed stream some games and other content here including baseball, basketball, golf, and even a little football. Unfortunately, however, you’ll have to pay extra to stream most of the big league games, as these sports channels don’t come standard with your Prime Video subscription.

Paramount+ (which includes CBS Sports), MLB.tv, and NBA TV are all available, and you can subscribe to these right through your Prime Video account. Other live events, such as boxing, are also available on Prime Video through premium channels such as Showtime. Interestingly, Prime Video is soon to be the exclusive broadcasting outlet for Thursday Night Football, so Prime members who are NFL fans have something to look forward to.

You can sign up for Prime Video alone for $9 per month, but it’s also included with Amazon Prime which costs $15 per month or $139 per year. For all the perks you get, we think the standard Amazon Prime membership is worth it. But, as we mentioned, sports channels might cost extra. It’s worth looking into if you already have Amazon Prime, but Prime Video by itself isn’t the best sports streaming service.

If you’re a die-hard combat sports fan and couldn’t care less about football, basketball, baseball, or ball-based endeavors of any kind, Dazn might be the best sports streaming service for you. If ESPN+ is the go-to app for live streaming UFC fights, then Dazn is one of the top platforms for watching boxing in the U.S. Dazn has live and on-demand broadcasting rights for several boxing promotions including Golden Buy, Matchroom Boxing, and World Boxing Super Series.

MMA fans can also stream fights from the Brave Combat Federation, which is the fastest-growing mixed martial arts league in the world. Other sports available for streaming on Dazn include Premier League Darts, UEFA women’s soccer, FCF indoor football, and cue sports such as snooker. There’s also an extensive library of past fights for you to watch, which includes iconic matchups like Mayweather vs. Canelo, as well as Dazn-exclusive boxing documentaries.

You can sign up for an annual Dazn membership for $100 which averages to $8.33 per month. However, if you want a more flexible subscription, then you can sign up for the monthly Dazn plan for $20. Dazn has offered free trials in the past, but unfortunately, there’s no such offer available right now.

Tags:  does the echo dot need the tp smart plug