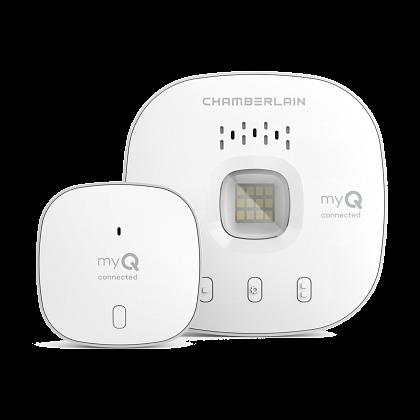 The Chamberlain myQ is an inexpensive smart garage door opener that's extremely easy to install and use. However, it lacks support for Amazon Alexa.

The Chamberlain myQ is an inexpensive smart garage door opener that's extremely easy to install and use. However, it lacks support for Amazon Alexa.

Not only is the Chamberlain myQSmart Garage door opener (MYQ-G0401-E) relatively inexpensive for a smart garage door opener, but it’s extremely easy to install and to use, too.

Among the best smart garage door openers, the myQ remains our top pick for its intuitiveness and compatibility with a wide range of smart home systems. However, it doesn’t have two-factor authentication tuned on my default, and though it works with Amazon Key (and many other smart home systems), it still lacks support for Amazon Alexa.

The Chamberlain Smart Garage Control is listed on the myQ.com website for $39.98, but we’ve seen it as low as $29.98 on Amazon; on Prime Day, it even dropped to $17. That’s one of the cheapest smart garage door openers we’ve seen, aside from the Genie Aladdin Connect, which costs $28.19.

In order to install and use this version of the Chamberlain Smart Garage Control, your residential door opener should have been manufactured after 1993 and use photoelectric sensors located near the bottom of the door. The manual also says you should not use this with a one-piece or swinging garage door.

When you open the box, you’ll find the Chamberlain Smart Garage Control model comes with two square pieces of hardware (along with a few smaller items): a large wireless hub and a smaller door sensor.

Both are primarily white and have a clean design. The door sensor has just one red LED and one test button on it. The large hub has three LEDs, a warning light (which flashes on and off before closing the garage door) and three buttons — a settings button and two buttons to activate two different garage doors. (This system lets you install two different sensors for two different garage doors: you can use the same hub, but you’ll need a second door sensor, which costs extra.) In the account settings, you can also add additional items to the system, such as a security camera, but that’s not included with this kit and will cost extra.

The hub is powered by a power adapter, which you’ll need to be plug into a power outlet. The door sensor runs on a battery.

I was very impressed with how easy it was to install this product. It only took about 15 or 20 minutes, and I was able to start opening and closing the garage door right from my iPhone 12, the phone I used to test this product.

To begin, just download the app (available for Android and iOS), and then follow along with the step-by-step directions. What made the process so easy is the clear language used in the directions and the easy-to-understand diagrams and animated GIFs, showing you everything from how to find the “Learn” button on your garage door opener to where to position the sensor on your garage door. It even included a link to a YouTube video right in the directions.

Like the directions, I found the myQ mobile app’s language, organization and design very useful. After downloading the app, I needed to set up a myQ account, which I was able to do directly from my phone by filling out some basic information. The instructions, app and the system itself (the hub and door sensor) do require a decent Wi-Fi signal from your home wireless connection (using a 2.4GHz signal). Since my garage is pretty close to my wireless router, this garage door system had a strong signal. However, there have been some user reviews that have complained about problems with Wi-Fi signals using this product.

As I mentioned earlier, I was impressed at how quickly I was up and running. And once it was set up, I could easily open and close the door from my phone. However, it’s not quite as integrated with home technologies (since it lacks Alexa support) as other models.

One of the first steps in setting up the myQ mobile app on your smartphone is that it will require that you set up an account. After you set it up, you’re sent a verification email, which requires that you click on a link in the email.

However, the myQ app does not have two-factor authentication on by default. In the security section of the app, there is a section for setting up a passcode, which could make the system more secure, but the setup did not require this.

But it does work with Amazon Key, which lets delivery people leave packages inside your garage, to lessen the chance they’ll get stolen. The service is free for Amazon Prime members, and you’ll need authorized shippers to have access to your garage or your car truck in order to successfully make those deliveries to you. But it can give you peace of mind if you’re often away from your home and fear that your deliveries might be stolen.

I found that both the Chamberlain Smart Garage Control hardware (the hub and the sensor) as well as installing the mobile apps was one of the most pleasant experiences I’ve had in working with technology, particularly the wide array of smart wireless devices I’ve worked with over the past 16 or so years. Overall, I was very impressed with how the device’s manual presented all the information, from setup to functionality.

However, although it works with many smart assistants, like Google Assistant and IFTTT, it still doesn’t have support for Alexa. We also wish that it had two-factor authentication on by default. But when it comes to convenience and cost, the Chamberlain myQ can’t be beat.