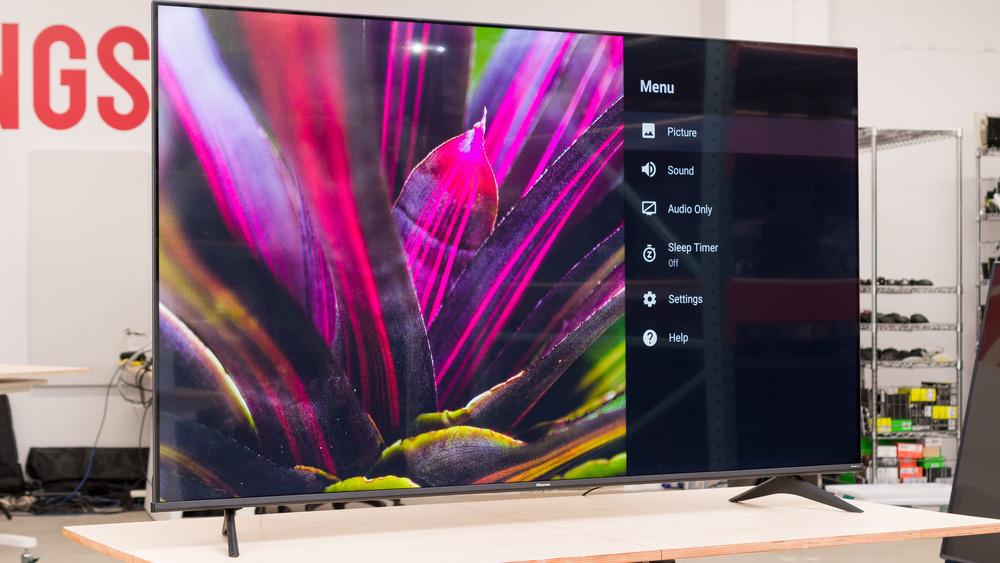 With the A6G series, Hisense has done that classically ‘Hisense’ thing of delivering a big, well-specified television for really not very much money at all. HDR10+andDolby Vision HDR? Some HDMI 2.1 action and eARC? Voice control and a half-decent smart TV interface? At this price, Hisense, you are spoiling us.

Well, up to a point. There are definite positives to the native 4K pictures the A6G is capable of delivering, and it’s not the worst upscaler of Full HD content you ever saw either. It’s even decently rapid as a gaming monitor.

It’s unusual to find any departure from the accepted idea of ‘design’ where televisions are concerned, and that goes double when the TV in question is priced as aggressively as the Hisense A6G. So it follows that this TV looks reassuringly like a TV, with no gratuitous design flourishes to be seen.

The direct backlight arrangement (which Hisense refers to as ‘DLED’) dictates a chassis depth that’s on the bulky side - at 74mm the 55A6G doesn’t make all that compelling a case for wall-hanging. But it’s neat and tidy enough if you decide to stand it on its simple ‘boomerang’ feet, just as long as your shelf, table-top or what-have-you is wide enough - those feet are fairly far apart.

Build quality is perfectly acceptable, and while there’s nothing luxurious about the feel of the plastics from which the Hisense is mostly made, there are no creaks or groans from the frame either. Keep the price uppermost in your mind and there’s little to be disappointed about here.

As far as specification goes, it’s a similar story: not much about the way the Hisense A6G is equipped would tip you off to the fact it’s been built to compete right at the entry level of the market. It’s compatible with HLG, HDR10+ and Dolby Vision HDR standards - which is not something most far pricier 55in TVs can boast - and it has plenty of connectivity. Three HDMI sockets, all of which can deal with the ALLM and VRR aspects of HDMI 2.1 specification and one which is eARC-enabled, are joined by a pair of USB inputs (one 3.0, one 2.0), a CI card slot, Ethernet socket, RF aerial for the digital and analogue tuners, and a composite video input for your properly vintage equipment. Wi-Fi takes care of wireless functionality, and there are digital optical and analogue 3.5mm outputs. 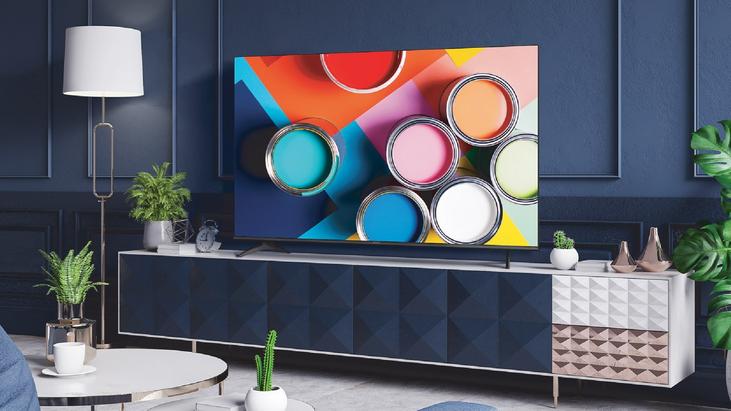 Overall performance is handled by a quad-core processor, about which Hisense is far from forthcoming. It’s fast enough to get input lag down below 20ms when in ‘game’ mode, and it copes with a pretty comprehensive smart TV offering, though, so it would seem to be potent enough in operational terms at least.

Hisense is quite promiscuous where operating systems are concerned - with the A6G it’s gone with it’s in-house VIDAA system. And as far as these things go when they’re not Samsung’s Tizen or LG’s webOS, VIDAA U5 is pretty decent. It can be customized, which is always nice, and app support is pretty good (inasmuch as the likes of Netflix and Amazon Prime Video are available, while Apple TV and Disney+ are not).

In the US, however, you'll find the A6G comes equipped with Android TV. Android TV, especially on entry-level TVs like this can be a bit slower than some of their high-end counterparts but at least Android TV is well-stocked with apps. You'll find all the basics here, and the smart platform will do its best to recommend shows and movies you might like based on your previous viewing history.

Amazon Alexa voice control is built in (it’s accessible via the Remote NOW app), or there’s the remote control handset. It’s big and comprehensive, with something approaching a plethora of direct access buttons - so if you simply cannot wait another second for access to Netflix, Amazon Prime Video, YouTube, Freeview Play or, um, Rakuten TV, you’re covered.

Between the HDMI inputs and the smart TV interface, it’s the work of a moment to get some native 4K content on board. And thanks to set-up menus that are either mercifully brief or frustratingly restricted (depending on your point of view), it won’t be long before you’ve achieved the most pleasing picture balance available.

With a Netflix-derived 4K Dolby Vision stream ofEnola Holmesup and running, there are obvious and numerous positives to the way the Hisense goes about its work. Detail levels, for example, are respectably high - and that’s true of even the finest details of texture or skin-tone. There’s very agreeable insight into darker tones, without the rather artificial cast some screens can succumb to when trying to eke out the minutiae from dimly lit scenes.

Motion-handling, too, is more than acceptable. The most complex on-screen movement can momentarily betray the amount of work the A6G is getting through, but for the vast majority of the time it simply takes a firm grip of motion and describes it faithfully. The stability and authority the Hisense demonstrates puts it well ahead of any number of ‘entry-level’ alternatives from any number of rival manufacturers.

It’s similarly accomplished where colour fidelity is concerned, even if it’s not capable of delivering the tiniest variations in tone and shade that some much more expensive televisions can manage. The balance here between ‘natural’ and ‘vivid’ is nicely struck, and even with content that relies on an overdriven colour palette (anything at all from the ‘Marvel’ franchise, for instance) colours stay the right side of ‘searing’.

There’s a definite flatness to the images the Hisense serves up, though, an overt two-dimensionality where plenty of modestly priced alternatives can generate half-decent depth of field. And while we’re being mildly picky, it’s safe to say the 55A6G isn’t capable of delivering actual black - instead the best it can muster is a variety of extremely deep grey. Combined with the screen’s lack of outright brightness, it means contrasts are understated and there’s a definite lack of ‘pop’ when white tones dominate the screen.

As an upscaler, the Hisense is reasonably adept with 1080p content and all at sea with anything less information-rich. Taking a Full HD image and making it fit the screen doesn’t impact too badly on detail levels or colour fidelity, and motion remains admirably smooth and stable too. But edges can get a bit restless, and the depth of field that is at such a premium with 4K stuff disappears altogether. But taking some DVD-borne information, say, or (worst-case scenario) some daytime TV broadcasts gives the A6G what used to be called ‘the vapours’. Detail levels fall off a cliff, to be replaced by ambiguity and noisiness. Few are the televisions capable of making pictures look simultaneously soft and edgy, but the Hisense 55A6G is one of them.

There are many TVs, at all sorts of prices, which make us suggest you buy a soundbar. The Hisense A6G is a TV that makes us shout ‘BUY A SOUNDBAR’ at the tops of our voices. It’s fitted with an audio system of two full-range drivers powered by a total of 16 watts - and while Hisense may have been shooting for ‘smooth and inoffensive’ it’s actually ended up with ‘bland and uninvolving’.

Dialogue is distinct, to be fair, and the top of the frequency range isn’t as zizzy as it might have been. But low frequencies are basically absent, and at anything other than very modest volume levels the Hisense sounds asthmatic. You don’t have to spend very much money at all on a soundbar that will wipe the floor with the audio system fitted to the A6G.

Should you buy the Hisense A6G 4K HDR TV?

You’re operating on a budgetHisense is a past master at delivering big, well-spec’d TVs at low prices - and here’s another example of that.

You don’t want to hang your TV on the wallAt 74mm deep the A6G is a bit of a throw-back to the early days of 'flatscreen' TVs.

You already own a soundbarOtherwise you’re looking at further (and essential) outlay.

You enjoy getting involved in set-upThere are very limited opportunities to influence picture performance here.

You want a fully stocked smart TV interfaceVIDAA U5 is a good portal as far as it goes - it just doesn’t go all that far. Android TV is better, but not quite top-tier either.

You expect to get away without spending money on a soundbarYou won’t. Trust us.

You might also want to check out our review for the Hisense H55U7B TV.

Tags:  do smart tvs have an aerial socket