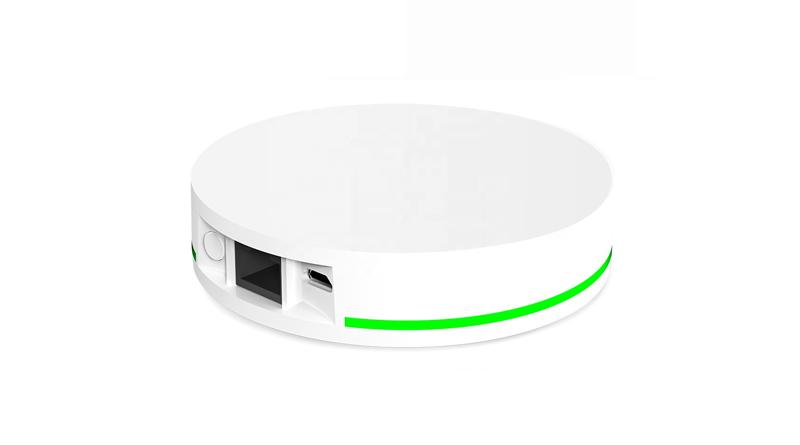 You may have noticed that many of the contributors to HomeKit News are not only fans of Aqara specifically, but Zigbee in general, which also includes me, so when another Zigbee hub with HomeKit support appears on the horizon, we’re always keen to investigate. The object in question, in this case, is a new Zigbee 3.0 hub from Chinese company ZemiSmart, which does indeed include HomeKit support, not only for itself but for a lot of child devices too – after all, what use is a HomeKit certified hub without devices?! Today, we’ll glance our eye over the hub, and in a separate review, look at the first (of probably many) ZemiSmart devices that work with the hub and are exposed to HomeKit.

It’s fairly likely that you’ve never heard of ZemiSmart, as until now, the company have had no real association with HomeKit unless you were to go down the HomeBridge route, however, the company have been around for quite a while, and have been offering a mix of WiFi, Zigbee, and Bluetooth devices to enthusiastic users, mostly due to their low prices and wide range of products, nearly all of which are compatible with the Tuya smart home ecosystem – you may not have heard of Tuya either, which is understandable!

ZemiSmart supplied the hub we’re reviewing today, along with three smart wall switches that we’ll cover in a separate review. The whole package came reasonably well protected, but the packaging for the hub is, to put it bluntly, rather flimsy, and suffered a fair bit of damage, so hopefully, if you do order one of these, whoever ships it, will provide a modicum of protection for the box, and by extension, the product inside. Still, the contents survived without any damage, which is the main thing.

The details on the box itself are quite simple, with just the hub on the front, along with the ‘Works with HomeKit’ logo we always look for. Save for the specs on the back, there’s nothing else, and as mentioned, the box uses rather lightweight card;

The box contains almost everything you need to get up and running, which includes; 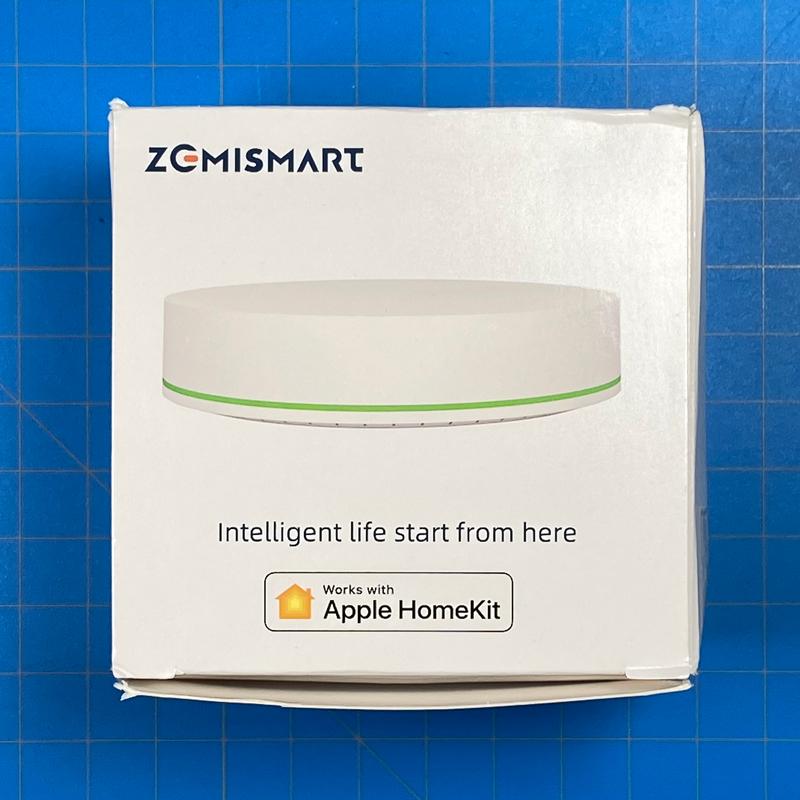 Three instances of the HomeKit code are included – one on the inside flap of the box, another on the manual, and a third on the base of the hub. The hub measures 90mm in diameter, and just 19mm in depth (not including the wall mount). Like the Aqara M1 and M1S hubs, the ZemiSmart hub has an LED ring that encircles most of the hub, although, unlike the Aqara hubs, the LED ring is not exposed to HomeKit. Furthermore, even in the Tuya app (there is no ZemiSmart app as such), there’s no control available to the LED ring.

The reason the LED ring doesn’t go all the way around the hub is due to the connections section on the rear, which includes a micro-USB port for powering the hub, and an ethernet port to connect it directly to your router or modem. There’s also a pairing/reset button. Whilst the hub can use ethernet, it would seem, at least from the information on the ZemiSmart website, that the hub can use standard 2.4GHz WiFi too.

There’s nothing on the top of the hub, not even a ZemiSmart logo (maybe not a bad thing?) whilst the underside features a circular rubber ‘foot’ to hold the hub in place. You also get an instance of the HomeKit code, as well as cuts in the base to accommodate the wall mount/bracket.

There seems to be conflicting information on how many devices the hub can support, with ZemiSmart claiming 100 devices, whilst elsewhere the magic 128 device count is mentioned. Either way, it’s not bad.

Adding the hub/bridge/gateway to HomeKit is as simple as it gets, with a quick scan of the HomeKit code. As there are no additional functions to the hub, much like the Hue Bridge, you can only see evidence that it’s actually in HomeKit by selecting the Home Settings for your HomeKit ‘Home’. Once there, you click on ‘Home Hubs and Bridges’ and the ZemiSmart Hub will be listed. Clicking on the entry will then simply bring up details for the hub, along with any sub-devices that are connected to the hub and exposed to HomeKit. In the example above, you can see I have two devices connected (it’s actually just one double rocker switch).

In order to add devices to the hub, you’re going to download the Tuya Smart app, and set up an account, although once you’ve added these devices, you can delete the app if you prefer, until you need to add more devices. The process for adding the hub to the app is not dissimilar to the procedure for Aqara hubs and app, with the app being set to discover mode, where it’ll pick up your hub on the network in order for you to bind it. Once binded (Bound?) there’s not a lot else you can do with the hub, as there are really no other jobs for it to do and no hidden features, which also includes the LED strip, which can’t be controlled or adjusted in any way. Adding what is referred to as ‘sub-devices’ (Aqara refer to them as ‘Child Devices’) is just as easy, but unlike the hub, these can only be added via the Tuya app, especially if you wish to expose such devices to HomeKit.

Once a sub-devices is added, as long as it’s a supported category, and is certified to work with HomeKit, it’ll automatically appear in your HomeKit home. I go into a bit more detail in my separate switch review, but safe to say, it’s all a rather painless procedure, as I’ve come to expect from adding Zigbee devices to Zigbee hubs.

WHAT WORKS WITH HOMEKIT?

When it comes to what is compatible with HomeKit, things get a little less certain for one reason or another, as ZemiSmart’s own site has a section in their store called HomeKit, which lists the hub, and also lists ‘Devices work with HomeKit Hub’ [sic]. To me, this doesn’t explicitly say that the devices are HomeKit compatible as such, but merely compatible with the hub. Of course, you could read between the lines and say that as these devices are under the ‘HomeKit’ section of the site, and are compatible with the hub, then they must be compatible with HomeKit, but I wouldn’t dare be so presumptuous as to state that with complete certainty. The devices that are listed, which cover roughly two screens worth of listings, with all of the devices belonging to categories that are supported in HomeKit, so it’s not unreasonable to assume these are all HomeKit compatible.

This includes the basics, like motion, temperature & Humidity, and contact sensors, as well as roller blind motors, curtain motors, and light switches. They also list a retrofit roller blind motor just like the recently released Aqara Roller Shade Driver E1, which looks fairly similar, and is in all honestly, probably identical under the cover. We’ll be reviewing that soon.

One thing that could be of interest to those looking to expand their homes on a budget, is that the ZemiSmart website claims that other devices that are certified to work with Tuya, not just ZemiSmart products. This opens up a door to a lot of cheaper sensors, motors and switches that previously required something like HomeBridge to get them exposed to HomeKit.

One final point on this is that there ‘seems’ to be no issue with regional restrictions on devices that work with this hub, so unlike Aqara, you only need the one hub – regardless of where you purchase it – to work with an apparently large pool of compatible devices. The potential downside of this is access to regional support if something goes wrong, so in some ways, it makes sense that Aqara sell certain products with regional locks, so the consumer gets support closer to home, including returns and replacements.

As the hub has little to do other than provide an entry to HomeKit for its sub-devices, there’s both little that can go wrong, and little to report on. With this being the case, the only thing I can say is that it has so far worked 100% without any issues (maybe due to its wired connection), and although it’s only connected to one double rocker switch at this time, there have been zero issues, no instances of a ‘no response’ and no reboot required in the four weeks I’ve been using it.

That said, there is a bug, which I immediately reported to my contact at ZemiSmart; The hub initially showed as solid green for the LED ring, and pulsed red when I initially added the smart switch. However, once the switch was added, the hub stayed in the red pulsing state. I thought there was a problem and spoke to ZemiSmart about this, who said that although it shouldn’t be like this, they are aware of the problem, and are working to fix it. It still works as expected, and as I actually don’t really want or need to see a constant green LED glaring 24/7, I’ve hidden the hub in a corner, so I don’t see any LED unless I pick it up.

Would I recommend this? Well, I’ve been neck-deep in the Aqara ecosystem, and really had no plans to deviate from it in terms of Zigbee-based products, with only Hue being the exception that was in place even before Aqara, so I would recommend this, if you’re starting out, and want to try some budget devices, before going full-on into ZemiSmart, as it’s still early days as to how much support it will offer, especially with other devices that are Tuya certified. That said, I can’t really fault Aqara’s range of hubs and products, especially their industrial design, which for Tuya compatible products, seems a bit hit and miss. However, there are some products that Aqara don’t yet offer, like triple and quadruple button smart switches, so it really depends on your needs. At the end of the day, there’s also no reason why you can’t have both of course. It’s your call, but the bottom line here is that my initial scepticism of this device has been overtaken by a curiosity to see just how much it can support.

Full disclosure: ZemiSmart provided HomeKit News with the ZemiSmart Zigbee Hub for the purpose of this review. No other compensation was made, requested or has not in any way influenced our opinion of this product.

Buy from ZemiSmart
Tags:  how to reset cygnett smart plug