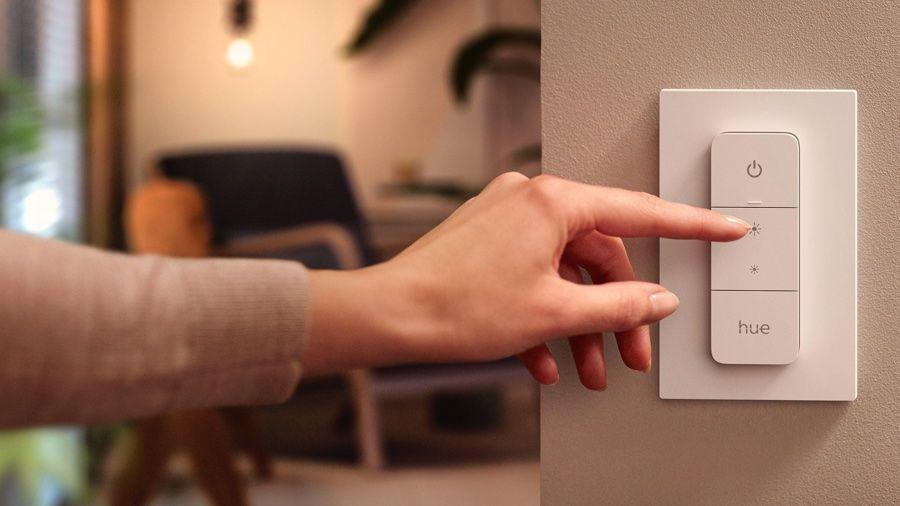 The best smart light switches make it even easier to control your smart home lighting. They work more cleverly than regular light switches, working within the smart control systems of your lights, rather than just turning the power on and off.

Some of the best smart switches, such as Philips’ Hue Dimmer Switch, provide old-school buttons you can press instead of using your smartphone app or smart speaker for use with the best smart bulbs.

You can use the Philips Hue V2 Dimmer Switch in two ways: as a stand-alone remote for up to 10 Hue bulbs, switching between four different presets; or as a controller for an entire Hue system via the Hue Bridge. That latter option enables you to control specific lights, zones and rooms, and you can customise the buttons via the Hue app.

Because the Hue Dimmer uses Zigbee Light Link, you should be able to control third party, non-Hue lights that use the same standard, although in our experience adding lights such as IKEA TRADFRI is a little fiddly and requires an additional app. Whatever bulbs you use, make sure they're dimmable or they won't work properly with this switch. Read our Philips Hue Dimmer vs Nanoleaf Remote guide to see how it compares to the other smart wireless option in this list.

Before you purchase, check our Philips discount codes to save on your order.

The best wired switch for affordability and flexibility

-The app isn't the greatest

Available in one, two or three-switch versions, SONOFF’s smart light switches are fairly cheap and don’t require much effort to install. However, they are wired switches so they’re designed to be used in place of an existing switch and they must be connected to a neutral wire in order to work. 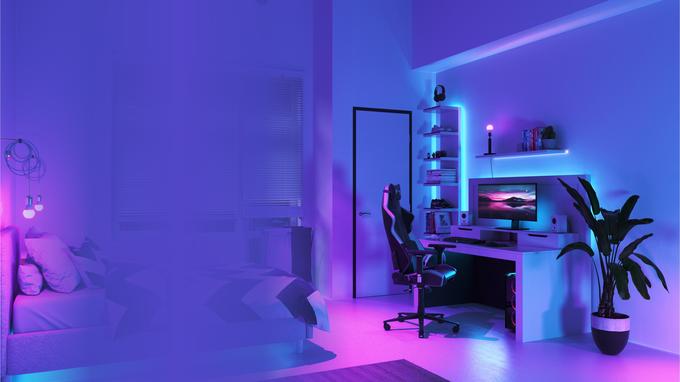 In addition to touch control, the SONOFF switches work with Alexa and Google Assistant via the eWeink Smart Home app, so you can control them with your voice or app; you can also give the app to other family members so they can control the lights too. They work on your routers 2.4GHz channel only, so if you have a split network, make sure you connect them to the right one.

+Unlike any other switch+Can control HomeKit scenes

If you prefer your lights to be decorative, you may well have invested in one or more Nanoleaf kits – and if you have, this cute controller matches the quirky visual style of the lights it can control.

The Nanoleaf Remote is a twelve-sided switch that enables you to save different colour scenes to each of its sides. Set Side 1 to turn the lights off and you can switch everything off by putting that side face-up; spin clockwise to make your lights brighter, and anti-clockwise to dim them.

Clearly this is a niche product, but if you’re a fan of Nanoleaf's geometric panels, this is a fun alternative to app-based control – and if you have an Apple HomeKit-compatible home hub you can also program it with HomeKit smart home scenes, not just lighting scenes, so it's potentially very flexible.

-Hub is quite expensive (but optional)

Lightwave makes a number of different smart light switches and smart plug sockets too; this particular model is a two-switch dimmer with four buttons capable of controlling up to 60W of LED lighting or 200W of non-LED lighting. It can work with or without a neutral wire but without it the dimming only goes down to 10W instead of zero – and like other dimmers you shouldn’t use it with non-dimmable bulbs.

This is similar to the Hue dimmer in that you can use it as a straightforward dimmer without any additional hardware beyond bulbs, but you can also pair it with Lightwave’s Link Plus hub for extra customisation and the ability to control more complex lighting setups.

The best switch for showing off

If you prefer your switches to be dark, this Wi-Fi switch also comes in black. Whichever one you go for, it looks great thanks to its touch-sensitive glass panel and LED backlight. Like most smart light switches it needs a 2.4GHz Wi-FI connection. This particular model is purely to switch lights on and off; if you’re looking for a dimmer, you’ll need to look for a different model.

The main draw here is that touchscreen: it’s good looking, and because it’s a glass panel it’s more water-resistant than traditional clicky switches so it can be used in more places. However it’s important to note that while the marketing images show this switch being used within inches of a bathroom sink, you need to follow the electrical safety regulations when you position any kind of switch near or in bathrooms.

What to look for in the best light switches

The most important consideration when you’re looking for the best smart light switch is its compatibility. For example, the Philips Hue dimmer switch v2 is designed to connect to Philips’ own Hue lights, but as it uses the Zigbee Light Link protocol it should also work with other Zigbee-based bulbs, such as IKEA’s TRADFRI. We say “should” rather than “will” because Philips makes no promises about interoperability here.

The second key consideration is how many bulbs you intend to control. To stick with the Philips example, without a Hue Bridge it can only control up to 10 bulbs; for more, or for more advanced options, you need to have a full Hue system. For wired switches there will be a maximum load they can handle, and that does vary from switch to switch. Think about the bulbs in the lighting circuit and add up their wattage to see what you need. And make sure your bulbs are dimmable if you intend to install or connect a dimmer switch.

Last but not least, there’s the choice of wired or wireless. Wireless is much simpler and the batteries last for ages – our current Hue dimmers are still on their first batteries after four and a half years – but wired ones can replace your existing switches, although of course they do require installation.

Tags:  how to control kogan's smart plug with google home