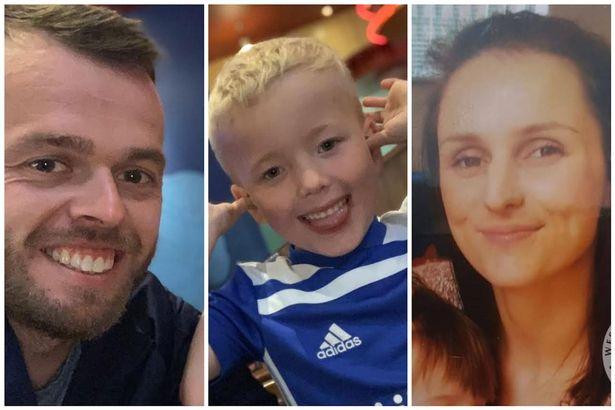 A father and step-mother accused of murdering a six-year-old boy have given different accounts of what happened in his final hours.

Arthur Labinjo-Hughes collapsed with fatal injuries at their home in Cranmore Road, Shirley, on the afternoon of June 16, last year. He died at 1am the following day after his life support was switched off in hospital.

The boy's father Thomas Hughes, 29, and step-mother Emma Tustin, 32, both deny murder and multiple counts of child cruelty. Tustin has pleaded guilty to one cruelty offence.

During the course of a trial at Coventry Crown Court both defendants have taken to the witness stand and essentially blamed each other for the suffering Arthur endured during the first national lockdown.

The Prime Minister's announcement on March 23 had unexpectedly confined the three of them to Tustin's home, along with her two young children.

The jury has heard Arthur was made to stand in a hallway for up to 14 hours a day, repeatedly assaulted, deprived of food and water as well as poisoned with salt.

It is alleged Hughes permitted and encouraged Tustin to use violence to his son, and that Tustin committed the final deadly attack while she was alone with Arthur on June 16.

Here we look at the defendants' accounts of the key events that took place that day.

At the hairdresser's home

That morning Tustin returned to the home of her hairdresser Catherine Milhench (Also known as 'Affy') - where she had been the previous day with Arthur. This time Hughes accompanied her and Arthur.

Tustin told the jury that Hughes 'pressure pointed' Arthur while they were there. She said: "The door was shut. Affy opened the door. She didn't know what was happening. Tom was pressure pointing Arthur to the back of the neck. Arthur was squealing."

Describing what happened in the car on the way back Tustin added: "Tom was talking to Arthur. He said 'wait until we get home'. Arthur said he didn't want to go home. Tom said he was going to f****** kill him'."

In his evidence Hughes said his intention that day was to take Arthur to buy a birthday card for his grandfather - if he behaved. He claimed Tustin's response to the idea was 'if you do that don't come back here', due to a previous fallout in the family.

Hughes admitted he shouted at Arthur and used 'disgraceful' language while at Ms Milhench's home, adding he was trying to 'scare him into behaving'.

He confessed to slapping Arthur for being 'fidgety' while standing by her door. He said: "I had Emma 'he's doing this, doing that, you've got to tell him'. Constant, constant theme and frustration got the better of me."

He denied 'pressure pointing' Arthur at the property, or at any other time.

Back home with Arthur

Tustin claimed after they arrived back at Cranmore Road at around 1pm, that Hughes continued to shout at Arthur before he left a few minutes later to go to the shops, taking her two children with him.

Her barrister Mary Prior said Hughes 'had absolutely had it' with Arthur's behaviour by that point. She put it to him that as soon as they returned home he took Arthur up to the bathroom and forced a large dose of salt down him with water.

The barrister alleged he then left to go Iceland, Sainsbury's and Smyths toy shop just to 'find some way of keeping out of the way for an hour-and-a-half'. In response Hughes said: "No not all."

He told the court he simply went to the toilet alone in those few minutes. Hughes denied having any knowledge that Arthur had been salt poisoned until he had been in custody for several months.

After Hughes left the home Tustin went upstairs to 'do her eyebrows'. She instructed Arthur to come with her claiming she did not trust him alone downstairs because he had allegedly dropped her tortoise on a previous occasion.

She said: "He held onto the banister. It was like he was walking up a mountain, like he was hiking. It took him a while."

Describing what happened next Tustin said: "I was upstairs doing my eyebrows. My bedroom door doesn't shut properly. I think Arthur thought it was shut. At that point he threw himself up against the door.

"The door bounced into the bedroom. The dressing room table was there. The door came back on him and hit his face. The first thing I did was check his face and send a picture to Tom."

Prosecutor Jonas Hankin put it to her it was during the 22 minute-period she was upstairs that she 'poisoned' Arthur by forcing him to ingest salt.

Tustin said: "No that's not true."

She also denied knowing 'salt poisoning was a thing' until she saw it on the indictment against her. Tustin told the jury she followed an 'old wives' tale' in her family and used salt on her genitals to relieve burning and pain - caused by the long-term health effects of her jumping from a car park and trying to commit suicide in 2013.

Due to the living room CCTV evidence it is undisputed that Tustin was alone with Arthur when he suffered his fatal injuries.

She was questioned thoroughly about what happened around that time by her own barrister, Hughes' defence counsel and finally the prosecutor. Ultimately she blamed Arthur for causing his own death. 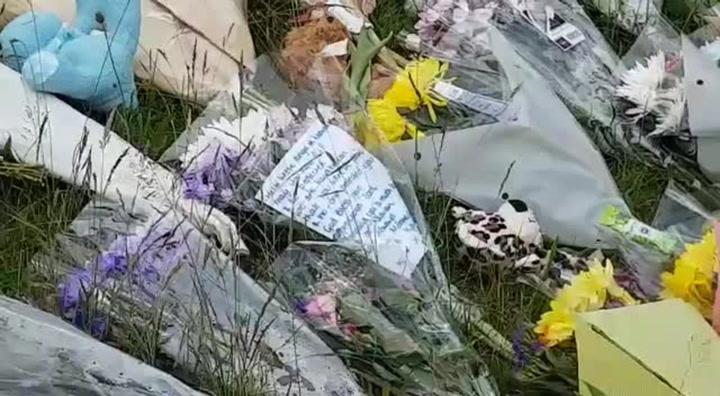 Tustin said she repeatedly went to pick Arthur up from the floor in the hallway. She said he hit his head on the floor 'three to four times' and, on one occasion when she went to stop him, he 'headbutted' her and flung his arms, hitting her.

Tustin spoke to Hughes on the telephone at 2.27pm for two minutes. She claimed she told him what happened and he 'wasn't happy' but denied he encouraged her to be violent to Arthur.

The prosecution alleges she went into the hallway at 2.29pm and carried out the fatal attack on Arthur. Tustin said: "No, that didn't happen."

She stated she 'might have been upstairs' at that time but could not say for certain.

At 2.32pm she text Hughes saying: "Just copped me in the stomach. He has thrown himself all over the floor. Won't get up for s***. I've shut the door on him."

Dad 'forced' salt down son and went to toy shop to 'keep out of way', court told

The CCTV showed the door remained open and Tustin admitted she lied about that in the text just to appease Hughes.

She also took a picture of Arthur lying motionless on the floor. Tustin said Arthur acknowledged her but refused to get up after she captured the photograph.

She claimed at some point shortly after that, while she was out of the hallway, she heard a 'crack' followed by a 'bang and a crash' which sounded like 'someone had fallen down one step'.

The prosecutor put it to her she was lying. He said Tustin had changed her account from her police interview and that it was very unlikely Arthur could have reached the top of the stairs in the 14 seconds since Tustin photographed him on the floor.

Finally, the barrister put it to Tustin that medical experts had concluded his fatal head injuries could not have been self-inflicted, and that they were caused by a combination of shaking and blunt force impacts.

Tustin said: "I was not near Arthur. I didn't kill him. I can't account for it. I was not there. I didn't see it. I just heard it."

In his evidence Hughes told the jury his impression at that time of what was happening at home was: "Same as normal. He was behaving as he was. I didn't think anything was wrong."

He thought when Tustin text him saying Arthur had 'copped' her in the stomach that she had tried to pick him up and he had swung his arms back and hit her. Hughes believed when she said he 'won't get up for s***' that Arthur was resisting getting up, not that he could not get up because he was unconscious.

He said he did not see the photograph on Tustin's phone of Arthur lying down motionless in the hallway, until the trial. He said if he had have done he would have asked what happened to Arthur.

Hughes accepted he received a 'frantic' phone call from Tustin saying Arthur had 'knocked himself out' and to get home quickly. He added it did not 'register properly' at the time.

The prosecutor asked why Tustin was captured on the CCTV moving Arthur into the living room then dragging him back into the hallway before eventually putting the boy on the sofa.

She said: "I tried to put him back on the step and check his pulse, get him to react. But he did not."

Hughes' barrister put it to her that she spent 30 to 40 seconds 'wandering around looking for her phone' after Arthur's collapse.

Tustin responded: "I didn't know what to do in that situation. It isn't a situation I would wish on anybody. I didn't know how to act. I already said I thought he knocked himself out.

"Clearly Arthur is already dead (effectively). While in that situation I didn't know what to do. I was panicking inside."

She told the court she did not call an ambulance straight away because Arthur had a pulse, was breathing, and she thought he would 'come around'. Tustin claimed when Hughes arrived home a few minutes later he told her not to call an ambulance, but she did anyway.

BrumWish 2021 aims to get thousands of Christmas gifts to young children in need across our city - the homeless, the vulnerable, kids in care and kids who have little.

This year's appeal is bigger and better than ever - because we have teamed up with our partners at #Toys4Birmingham, including Thrive Together Birmingham, the Birmingham Playcare Network, the Edgbaston Foundation and Birmingham Forward Steps.

Three donation days, held at Edgbaston to take in new and nearly new donations of gifts and books, are now ended.

You can buy a gift from the #Brumwish Amazon Wishlist here.

You can also donate cash, which will go into a fund held by a charity partner to use to plug gaps or buy specialist toys for children with additional needs. This is the link to make a donation.

Hughes said he arrived home within a matter of seconds of Tustin's phone call. Explaining why his first action was to put the shopping in the kitchen he said: "At that point I had to try and assess the situation. I didn't know what I was walking into."

He told police when he went to Arthur on the sofa his son appeared 'dazed' like 'the lights were on but nobody's home'. He admitted slapping him on the back of the head and giving him Coca Cola just to try and get a reaction.

Hughes said: "I thought he might spit that back up. I would rather have him choking than have him give me nothing."

Hughes said it was not until he had been arrested and remanded in custody that he had viewed the living room CCTV of the events in the home at the time, including Tustin moving Arthur about while he was unconscious.

Asked how he felt about the footage he said: "Angry. That's my boy and she used him like a rag doll."

Tags:  how to stop my toilet from squealing