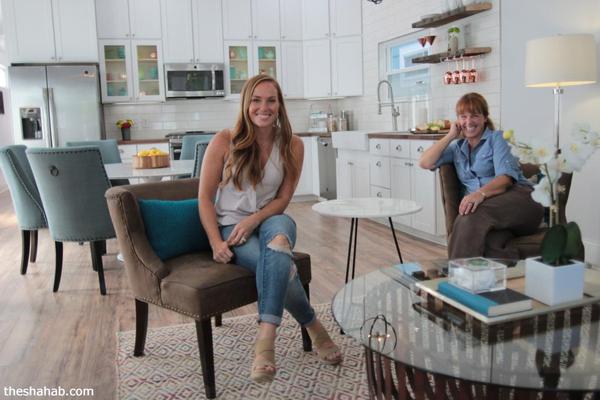 Josh: I would want an open-concept kitchen and dining room with a massive island; all the counter space one could need; a dedicated fridge/freezer for chilling cookies, pies, and various baked goods; and a wall of folding doors that open up to a large deck/outdoor entertaining space.

Megan: Kid Megan wants a bar with a roulette wheel, because my neighbors had one when I was growing up. The adult me wants black-frame windows, a wide, open staircase like Cameron Diaz’s house in The Holiday, and some Mediterranean-villa features, like a big stone veranda with lemon trees. And your wall of folding doors. I can feel contractors everywhere rolling their eyes. This is delusional for $350,000.

Kristin: I just keep thinking about that massive, weird gold turtle the ladies saw when they went shopping at Urban Styles in the motorcycle episode. You guys have much bigger plans and lives than I do.

Megan: Mina has an unusual plan for this neighborhood: The new house will have an attached garage facing the street. There’s no alley, so any garage has to face the street. She says Bates-Hendricks is transitioning and attracting young families, so a garage is essential.

Josh: I love the front-facing garage. It feels very Toronto, or any number of other cities that lack the abundance of alleys we have here.

Kristin: I like the design. Even though I hate the suburban houses that are all garage from the street, this has a fun look. Plus, it’s better to carry your groceries up stairs from an attached garage than from a detached garage in the backyard.

Megan: Yeah, the upper levels balance out the garage very well. To get there, the crew had to deal first with a neighbor’s sewer pipe that ran across the lot. Not many shows could get 10 minutes or so out of a sewer pipe issue and keep it entertaining, but the Good Bones crew have such a fun and affectionate rapport, we enjoy listening to them hash out anything. They have to figure out if the neighbor is responsible for the sewer line, or if they are. The word “easement” comes up a lot.

Josh: I had no idea what an easement was, so I went digging on the Googles. As a homeowner, this is something I should have known before, but here we are. When Karen and Mina arrive onsite to talk to Cory about the situation, Karen naturally pops out of the truck with Braveheart the rooster (RIP) in a harness. Apparently she is taking him to Iowa soon, and he needs to learn to walk on a leash. Per usual, the questions abound, and the less-than-family-friendly gay jokes about a rooster in a harness also abound.

Kristin: In the long run, fixing the pipe was a great deal for both the Chicks and the neighbor. Replacing a sewer line that long would have been crazy expensive. It’s crazy that the line was even permitted years ago.

Megan: Favorite-quote candidate, from Karen: “Even if they don’t have an easement, you don’t just chop off someone’s sewer line.”

Kristin: True, but what would they have done if the neighbor hadn’t cooperated?

Megan: Charm. You don’t stay in this business for more than 10 years without that talent. As Karen once told me in an interview about getting help in the construction industry, “Have you seen Mina’s ass?” Anyway, this lets them bust out the heavy machinery again, which Mina has geeked out on driving this season. I had my eyes off the screen for a second, and when I looked back, I thought, Mina must have borrowed a hat from Karen. The one she was wearing had a wide brim and looked kind of English. Then I realized it was Karen driving. I knew Mina is a toboggan woman.

Josh: That hat threw me all the way off. I was so confused. And is “catbird seat” a technical term or just a Karenism?

Kristin: Catbird’s a term—I just haven’t heard anyone use it in decades.

Megan: While digging, they hit something hard, and Cory and Mina yet again entertain us with something that should not make good TV by debating whether it’s a long-lost foundation or just “random bricks.” This show should be called Good Drinking Buddies. Turns out, it’s a cistern.

Josh: OMG, please explain the cistern because we have one in the backyard of our near-100-year-old home. Two large rocks sit atop to keep you from falling in, but the chipmunks sure do like to taunt our dogs from inside.

Kristin: My husband heard of someone losing a car by driving into an empty cistern. The crew got lucky here because they could just block it off with rocks and shore it up, not dig it out.

Megan: My family had one growing up in the country. You should hear my horror stories of how one flushes a toilet in a house with an empty cistern.

Megan: Mina wryly jokes, “You know [Mom] wants to dig that out and make a little wine cellar down there.” I loved that—even building on an empty lot, Karen could find something to save. Flash-forward to the house framed out, and Mina gets lifted up to the second floor in a cherry-picker, like she’s Cleopatra. I don’t think she is preggers at this point. 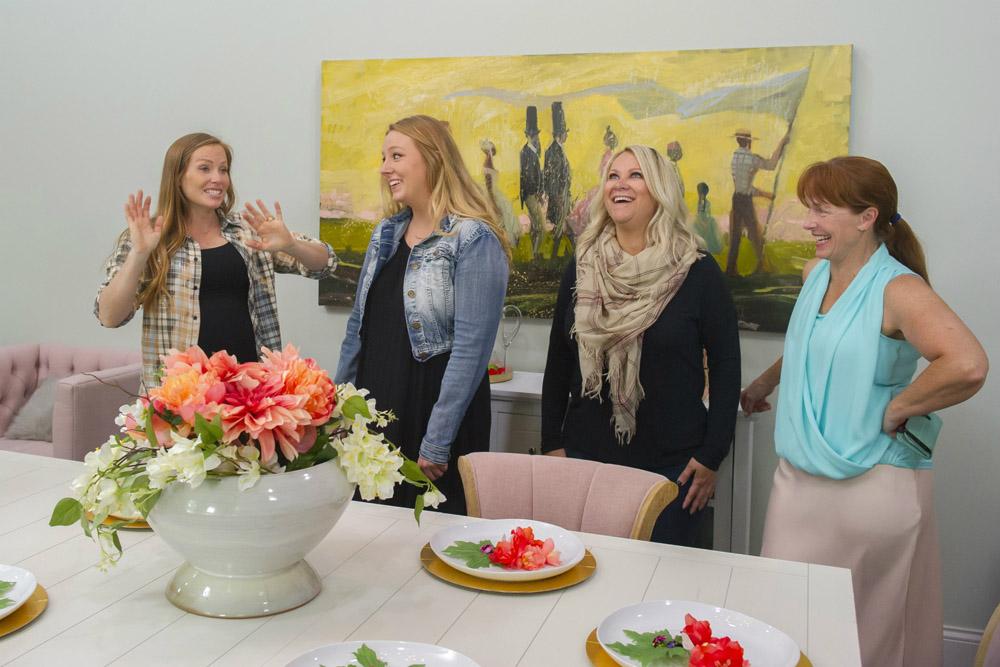 Josh: I don’t think so, either. This episode, much like MJ’s, felt like the project ran the course of most of a year.

Megan: It was a big project, and the result is very different from every other house they’ve done. The floor plan feels a little like a townhouse you’d rent on the Florida Panhandle. The front door opens to a foyer and staircase to the upper level, which functions as the primary living space. The main or ground level functions more like a finished basement.

Kristin: The majority of the ground level is dedicated to the garage, but a surprise den is included in the back. It’s a great hangout space or an opportunity for a playroom adjacent to the backyard. Where you really enter the home is up the stairs to the living, dining, and kitchen area. For the second week in a row, the space is large and bright. The Cafe appliances certainly are an upgrade; the stove alone runs about $3,000. I like the idea of “living” on the 2nd floor. Seems like you would have more light and less traffic noise.

Megan: That’s very Hawaiian, which I only know from HGTV. So far, we’ve compared this house to Toronto, Florida, and Hawaii.

Josh: Cory wants to add a skylight to the newly vaulted ceiling idea on the second floor. Mina pragmatically explains that the cost to install is not worth the return. I like her more each episode. And Cory makes up for the idea by being adorable and mispronouncing words.

Megan: Another few improbable minutes—Mina teasing Cory for this customized pronunciation of “grandiose.” She got it right.

Kristin: I like that Cory changes direction by using the word “elaborate” in a new take. Really, Cory? You thought the editors would let you get away with that?

Megan: MJ, wearing a light-denim-on-light-denim combo, looks as good as someone can while painting. He and Karen make an ombré effect on the stair risers.

Josh: A modern-day Canadian tuxedo, but with a lovely tunic instead of the jacket.

Megan: This is a good time to mention that Two Chicks has a likely buyer for this house, Hannah and Luke, whom they know well. So Karen thinks the ombré is Hannah’s style.

Kristin: It doesn’t quite work for me. I like the idea, I’ve seen it done well, but the mix is off for me here.

Megan: It was pretty subtle, at least on TV. I gasped when we learn that Hannah and Luke’s favorite thing about Indiana is the sunset. Me, too! I’ve never heard anyone else say this. We have sneaky-good sunsets. They go from soft blue and goldy-peach to fiery pinks and oranges in 15 minutes.

Josh: I had never thought about our sunsets, but you know what, you’re all correct. They are pretty damn fantastic. You know what’s not fantastic? Murals in homes.

Megan: So, the special thing we’ve been waiting for is a mural painted (very well) by Indy artist Justin Vining. It’s a sunset in a…nursery! Because Hannah and Luke are expecting, and are due about the same time Mina is.

Josh: Before you yell at me, I think the mural is beautifully done and has a lot of movement. But what happens to a mural when you grow tired of the style of that room? All of that beautiful hard work gets painted over?

Kristin: Right with you, Josh. This ends better than I originally feared, but it’s really design-specific—plus extra-awkward when you are friends. They are gonna know when you get rid of it.

Josh: They sure do. It does add a lovely warm touch to the exterior. It feels very Cape Cod.

Kristin: It is so nice to break up the monotony of siding with the shingles.

Josh: Overall, I thought this design was beautiful but boring. And I feel bad saying that since the homeowners are so jazzed about the finished product. But it feels sterile and less than inviting to me. The outside aesthetic doesn’t seem to match what you expect to walk in and find.

Kristin: I think the overall design is more interesting than the other new builds this season. It certainly has space. I like the stone in the kitchen as the backsplash, but it’s nothing new. They knew that the owners liked neutrals—and a big blank canvas is what they got. Hopefully, their own furnishings will warm the home with their personalities as they welcome their bundle of joy.

Josh: If I were producing, I would have moved Tad’s episode to the final week. I understand the through-line they were creating with Mina’s friend being pregnant and wrapping up Mina and Steve’s IVF journey. But it wasn’t as compelling as Tad’s episode, which felt like a family affair as they all came together to build something for Tad. That design was “them,” it was interesting—and it brought the Timber Twins back.

Megan: I get that. That was a great episode—maybe my favorite this season because you know I love Tad. In fact, he deserves his own HGTV show with Cory, Austin, and MJ, and it should be called Studs. But the IVF story was the backbone of the season, and I bet the Good Bones fanbase loved it. They have real affection for Mina and Karen. Ending the season on this storyline led to the real big bang of the episode—an exploding egg for Mina and Steve’s gender-reveal party. But it’s a cliffhanger—we didn’t get to see the color! Is “baby Charlie” a Charlotte or a Charles?

Megan: I’m not playing along—the answer isn’t there, either. But Mina is due anytime now, so I’m sure we will find out online. See all you Boneheads in cyberspace until season 6!