How do so many iguanas get in Florida toilet bowls? 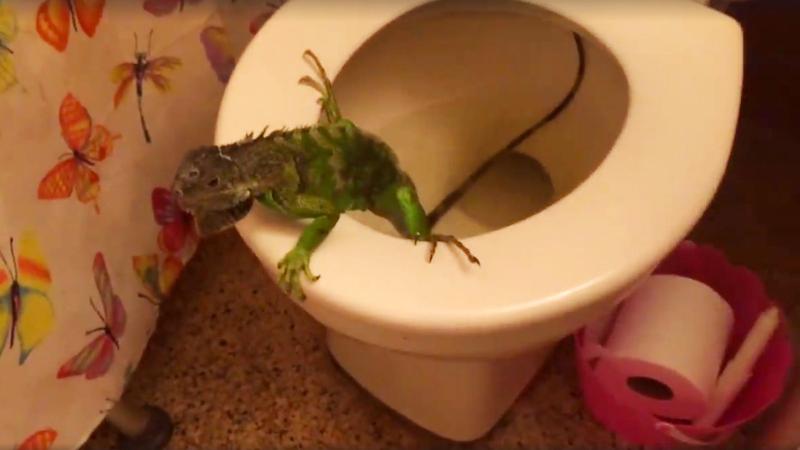 Iguanas are commonly found in Mexico, Central America, South America and the Caribbean. In 2017, you could add "Florida toilets" to that list.

So far this year, news stories reported that iguanas have turned up in Florida commodes at least five times — although there's reason to believe it's happened more often than that.

What are they doing in the toilet? Besides the backstroke, that is?

Trying to get out.

Although other animals have been known to intrude into toilets — rats, for instance — iguanas are perfectly adapted for plumbing infiltration. The voracious little Godzillas, which can grow to be 6 feet long from snout to tail, frequently climb trees and also tend to be good swimmers, able to hold their breath for an extended time period.

RELATED COVERAGE: It's so cold in Florida, iguanas are falling from trees.

From the trees "they come down from the vent pipe in the roof," explained veteran Boca Grande iguana trapper George Cera, who has written a cookbook called, Save Florida, Eat an Iguana. "Even if your vent pipe is closed, that doesn't mean your neighbors' is."

Once an iguana gets into someone's plumbing, it can quickly wind up swimming in the sewer system, he explained. Then it's looking for a way to escape.

"It's the luck of the draw where they come out," he said. "The next place to pop out is your 3-inch toilet pipe."

In other words, while New York's sewers may not be filled with alligators, as the legend has it, Florida's sewers do apparently team with toothy green iguanas that frequently pop up in the pooper.

Among the many perils that Floridians regularly confront — the state gets more hurricanes, lightning strikes, sinkholes and shark bites than anywhere else in the United States — finding an iguana in the toilet is unique. Not only does it happen more in Florida, but a LexisNexis search of news stories from around the nation reveals that it happens only in Florida.

This year isn't the first time an iguana has turned up in a Florida toilet. In 2015, for instance, a woman in Fort Lauderdale called Roto-Rooter to clear a clogged commode, only to hear the plumber scream upon yanking out an iguana. It died — the iguana, that is, not the plumber.

But this is the year when reports of iguanas in toilets repeatedly hit the news.

The most recent toilet iguana to make news happened Nov. 30 in Hialeah. A man named Giovanni Profera told Telemundo, "I sat down, I felt pressure, I jumped and saw a lizard." The iguana scrambled out of the bowl and fled, no one knows where.

The video went viral after it was broadcast on the Spanish language channel. But the New York Times subsequently reported that the incident was actually a hoax perpetrated by a performance artist named Zardulu, who titled the piece The Usurpation of Ouranos.

The newspaper noted that the hoax seemed plausible only because so many real cases of iguanas popping out of toilets occurred in Florida.

We’ll deliver the latest news and information you need to know every weekday morning.Loading... 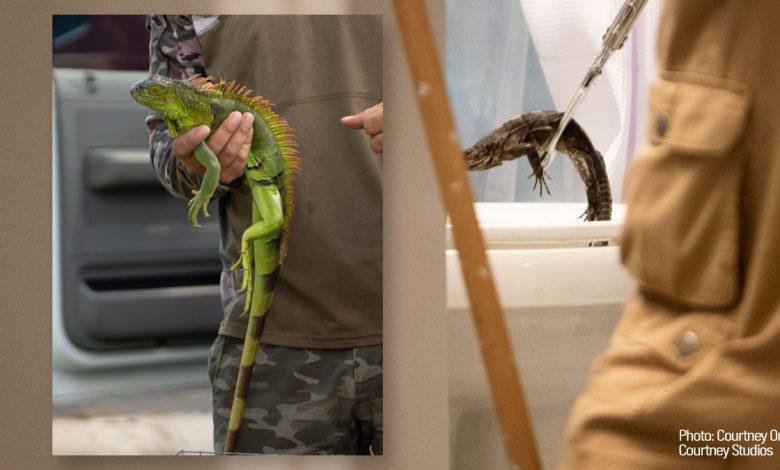 You’re all signed up!

Want more of our free, weekly newsletters in your inbox? Let’s get started.

Explore all your options

Among those real cases was another one last month. A woman in Palmetto was going to clean her toilet but freaked out when she discovered an iguana swimming in the bowl. She has been afraid of lizards since she was 5.

"I didn't know what it was at first, so I instantly screamed and my 9-year-old daughter come running in and she said, 'Mommy what is it?' and I said, 'I don't know,'?" Dani Craven told WFLA-TV. "All I could see were scaly, like a scaly tail. I couldn't tell if it was an alligator or a lizard. I didn't know."

Her husband wasn't home and she wasn't about to tackle it alone. She put out a cry for help on Facebook and a neighbor came over armed with rubber gloves, a net and a cooler. The neighbor caught the creature, even though it kept hissing at her. She took it to a wildlife rehabilitation facility.

In August, a man in the South Florida community of Medley was trying to unclog a toilet when he looked down the drain pipe and saw an iguana peering up at him. The man's uncle calmly caught it with a loop of rope, then walked it outside as if it were on a leash and turned it loose, which means it can go invade someone else's toilet.

In July, Univision reporter David Adams, a former Tampa Bay Times Miami bureau chief who lives in Key Biscayne, donned ski gloves, a gas mask and a bulletproof vest to remove an iguana from his toilet. He captured it by wrapping it in a beach towel. He, too, chose to release the lizard back into the wild.

"He hissed at me and had a couple of jaw snaps, but then scampered away to rejoin the reptilian hordes in our neighborhood," Adams wrote in a Facebook post about the encounter.

In May something similar happened in the Miami suburb of Kendall. A woman lifted the lid of her commode, spotted the iguana, closed the lid and dialed 911. Miami-Dade Fire Rescue's Venom Unit — which routinely handles calls involving pythons and other snakes — captured the critter, and said it was a first for them. They took it to a wildlife rescue center.

Florida is infested with more exotic and invasive species than any other state, with the roster ranging from feral hogs originally imported by Spanish conquistadors to giant African land snails smuggled in a few years ago by a religious cult.

Pythons are the best known, though they're largely confined to the Everglades, but iguanas are among those that have spread the most widely across the state.

The earliest official report of iguanas roaming the Florida wild dates back to Miami-Dade County in 1965, according to Sarah Lessard, spokeswoman for the state Fish and Wildlife Conservation Commission. Now they're found all along the Atlantic coast from Martin County down to the Keys and in isolated instances have been found on the state's west coast as well.

The next official sighting, from 1979, came from the island community of Boca Grande, near Fort Myers. Local legend says a Boca Grande resident brought a pair back from Mexico as pets, then either turned them loose or lost them, and they became the Adam and Eve of a huge Florida iguana colony.

By 2007 the island was overrun by thousands of the lively lizards. Finally Lee County assessed a tax to pay for a trapper, making it the only place in America with an iguana tax. In just his first two years on the job, Cera, the trapper, caught 16,000 iguanas. As of last year he was still averaging about 2,000 captures a year.

A similar drop has occurred in reports of iguanas in Boca Grande's toilets, Cera said — but it has never entirely stopped.

"Back when the population on the island was larger, it would happen two or three times a month," he said. "Now it's maybe one or two times a year." None of those incidents made the news, suggesting that there are some iguanas that, like a politician facing indictment, manage to find a way to slip past reporters.

Cera, whose cookbook includes recipes for such delicacies as iguana tacos, said the frequency of iguana toilet sightings has made him wonder what sort of animals routinely pop up at Florida's sewer plants.

Bill Logan, spokesman for St. Petersburg's public works department, said city officials are unaware of any iguanas appearing in the city's sewer system. But two years ago, he said, workers shutting down the old Albert Whitted sewer plant caught an 18-inch-long Australian catfish swimming in the aerators. They figured someone had flushed the fish when it was smaller and it just kept growing.

Nobody, he said, was brave enough to eat it.

Tags:  how to stop hissing toilet