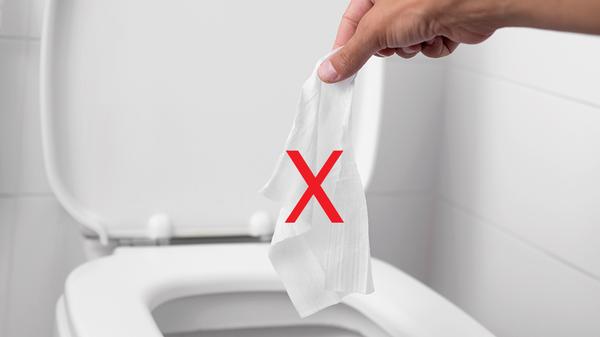 With toilet paper currently in short supply, you might be finding yourself temporarily having to rely on alternatives – tissues, baby wipes, kitchen towels or even newspaper. These will all get you through until normality returns to supermarket shelves.

But whatever you do, don't flush them down the toilet – they're not water soluble, so you're at risk of blocking your toilet.

So what should you do with them instead? And if your toilet's already blocked, what can you do about it?

How to unblock a blocked toilet

Reach in yourself (sorry)

To start with, you'll want to try reaching in and dislodging any obstructions in the bowl or S-bend. Yes, it's going to be unpleasant, but it's an unavoidable first step.

Still blocked? OK, now wash your hands thoroughly, grab your plunger and get to it – plungers aren't expensive, so although you're not going to be using it on a daily basis (we hope) it's handy to have one in the house in case of emergencies. Modern plungers have a bellows-like design and are more effective than the plungers of old, but you'll probably still need to work it up and down a fair bit. If this works then great – you're back in business.

If plunging doesn't work, it might be time to call a professional. Plumbers have a whole range of specialist tools, such as electric eels and other nifty devices, which can make short work of blocked pipes. But plumbers can be expensive – particularly if you need one at short notice and/or in the dead of night – but it's probably money well spent.

If you're an owner-occupier, you can call whichever plumber you like. But if you're renting then your landlord may have specified which emergency plumber you have to call. This may mean the costs are covered, but it also means that if you don't use that plumber you may be liable for the full cost.

What if you don't have a nominated emergency plumber, or if the agent's changed plumbers and hasn't notified you? You still need a plumber, so call one, but you'll most likely need to pay upfront and attempt to recover costs from the agent later. Make sure you keep all receipts and be prepared that you may have an uphill battle on your hands.

What makes toilet paper so special?

Toilet paper has a unique requirement. It needs to safely navigate the array of pipes, bends and subterranean channels between toilet and wastewater treatment plant without causing any blockages, and without the need for human intervention.

Toilet paper needs to be readily water soluble, while still being strong enough to safely do its job. This important characteristic is a key element in our toilet paper tests, and according to Sydney Water, anything that takes longer than a minute to dissolve from when it goes down your toilet can cause problems.

Can I flush paper towels or tissues down the toilet?

It's not just a question of blocking your own toilet – you could affect your neighbours' plumbing too.

Many strata committees are posting their own toilet-flushing guidelines for residents.

No, you can't. In contrast to toilet paper, things like tissues and kitchen towels are designed to retain their strength as much as possible, especially when wet.

Flush a tissue or paper towel down the toilet and it won't break down, at least not readily, so it's a prime candidate to clog your pipes.

Can I flush baby wipes, moist towelettes or 'flushable' wipes down the toilet?

No – they're just not that flushable. According to Sydney Water, about 75% of all sewer blockages involve wet wipes, and they have to remove around 500 tonnes of wipes from the sewer system each year.

We've reported widely on this vast problem and as a result manufacturers have 'redesigned' their flushable wipes, claiming they're flushable – but they're not. We've found even the new ones still don't break down readily in the sewer system.

Look closely at the wrapping of your toilet paper and you might see a note telling you to finish the job with one of the new, improved flushable wipes. Don't – it's unlikely to work.

What do I do if I've run out of toilet paper?

So the worst has happened and your supply of toilet paper is exhausted. You may be tempted to reach for alternatives: tissues, baby wipes, kitchen towels or even newspapers. And you absolutely should – but you still shouldn't put them down the toilet.

Take a leaf from one of the many places around the world where people don't flush toilet paper (or anything other than organic matter) down the toilet – add a small lined bin to your bathroom for paper disposal (frequently emptied of course), rather than putting it in the toilet.

You can also cut old towels into pieces that can be washed and reused, or retrofit a bidet seat or other water-based cleaning option. The point is, don't panic because you still have plenty of options.

When will the toilet paper shortage end?

The good news is, production of toilet paper hasn't stopped – shelves may be empty at times, but they're being restocked. The best thing you can do is only buy what you need so there's enough to go around, and also be community-minded in the meantime – if you're well stocked, then share a roll or two with your neighbours if they're running low, and we'll all get through this together.

Tags:  how to stop toilet from making noise after flushing