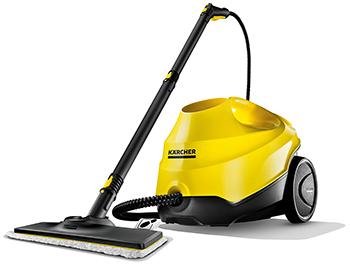 In an attempt to restore my hands to their former glory and ditch the chemicals, I purchased a Kärcher SC3 Premium kit for $399. It only came with one of each cloth type, so I topped it up with additional cleaning cloths, extra brush attachments and a window-cleaning attachment for a further $100.

How does it work?

The SC3 has an onboard tank that fits about 1L of water. The cleaner itself is small and looks like it could pass for a kid’s toy. That said, its small size makes it easy to move about and store in a cupboard. With 3m of cord and 2m of flexible hose, I could reach most parts in a room from a single plug.

Once you turn it on, it takes roughly 30 seconds to get hot enough, you know it’s ready when you hear the machine start gurgling. The handle itself has a squeeze trigger to get the steam flowing and a little yellow switch to adjust steam levels.

I moved through the entire house cleaning whatever surfaces and appliances were suitable. There are many household fittings and fixtures you should steer clear of that don’t like either heat or steam (like unsealed or polished wood). Luckily, my home is devoid of most of these things, so I could run amok.

The first think I did was attach the small, turbo-brush attachment and went to town on the hobs.

The Kärcher blasted away any grease and cleaned the hobs really well without any scrubbing from myself. I wasn’t expecting much residual moisture to be leftover on the hobs, but I needed to mop up afterwards with an old towel – a common thread when using this device.

Cleaning the engineered-stone benchtop and splashback was a breeze with the hand tool fitted with a terry cloth “sock” that helped with the job. After mopping up residual moisture, the bench looked pristine. Using the same tool on the sink and microwave yielded similar results.

Verdict: The SC3 is a winner in the kitchen. The results were fantastic. 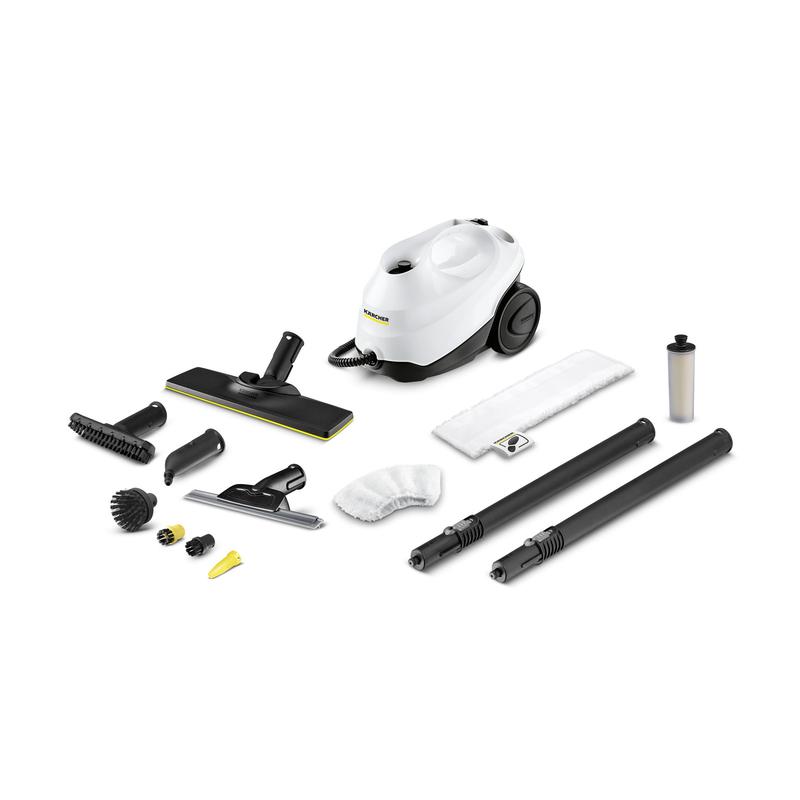 Using the hand tool with a fresh terry “sock”, I attacked the bathroom next. The tiles and grouting came up sparkling with little effort from me. The same can’t be said for the shower tray. A week of built-up soap scum proved to be worthy challenge for the steam cleaner. I would’ve got there eventually, but it was a job that was miles easier doing it the old way with some shower cleaner sprayed in there.

My wife forbade me from chucking the brush down the toilet, so that’s another spot that needed some cleaning product attention.

Verdict: Excellent on all surfaces outside of the shower tray. But there are a few places where the SC3 either wasn’t allowed to go, or where chemicals did a better job.

To turn the SC3 into a steam mop, you fit two extending wands to the cleaner and attach the mop head and cloth. I was impressed with the cleaning effort with the steam on the lowest setting, though the terry cloth that Velcro’s on to the mop head got dirty really quickly. By this stage I’d only hit the kitchen floor and already needed to swap the cloth for a fresh one. It might be a damning indictment on the state of my floors, but you can’t easily rinse it like you would with a normal mop and bucket. Since I’d bought a second cloth, I could change it after finishing the kitchen and then continue the job. There wasn’t too much residual moisture and it all dried in less than 30 minutes.

When you need to change the cloth, there’s a little tag you stand on while you lift the steam cleaner head away, that tears off the Velcro and you chuck the cloth in the wash – it’s miles easier than trying to peel it off with your hands.

Verdict: It works really well. But you’ll need more than one cleaning cloth to get the job done if you have plenty of hard floors.

The window attachment looks like a regular squeegee and the steam fires out onto the glass just below the rubber. The steam blasts away greasy marks and dirt, but the water also condenses quickly and runs down the glass.

It’s easy to use the squeegee to get it off but I deemed it essential to roll up a towel at the bottom to catch the rogue drips.

The outcome was a perfectly spotless window or mirror and a soggy towel to chuck in the wash afterwards. It was much better than my old trick of using paper towels and window cleaner to get the job done.

Verdict: A bang-up job, but beware the drips.

I was very pleased with the cleaning performance – except for when it came to the shower tray. A week of showers just left too much build-up to easily shift with steam alone. Granted, I could clean the shower every couple of days, but that’ll never happen.

Same goes for the dunny. I’ll stick to using chemicals in there, but maybe I’ll buy a pair of gloves to wear while doing it to protect my re-softened hands.

For everything else, I’ll use steam from now on for the weekly clean.

However, where the idea of a total chemical replacement came unstuck was when it comes to cleaning up after cooking dinner or dealing with a spill. It’s too much of a kerfuffle to pull the SC3 out of the cupboard and wait for it to heat up for these quick jobs when a simple spritz and wipe with a cleaner and cloth tackles the job in seconds.

Even with those drawbacks, I’m still a firm steam convert going forward. You might turn your nose up at the initial outlay, but I believe it’s worth it. I’d also recommend buying a few extra cleaning cloths at the very least, and any attachments you might want to use around your home too.

Our reviews are trials of new and interesting products from the perspective of our product experts. Our lab-based tests offer truly objective product comparisons.