Rubbing your hands together can cure constipation, according to an acupuncturist — and TikTok users say it works 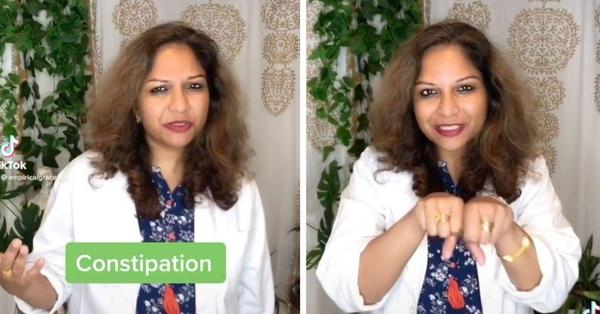 Next time you're a little backed up in the bowel department, you can try using a simple hand trick to get things moving.

Rubbing the sides of your hands together can help you poop if done correctly, licensed acupuncturist Anita Tadavarthy recently shared on TikTok.

She demonstrated the trick in a recent video that's gotten hundreds of thousands of likes. All you need to do is press your fists together so the sides of your pointer fingers and thumbs touch, and then firmly rub them back and forth for a couple minutes.

The motion stimulates the large intestine and colon using acupressure, Tadavarthy explained in the video.

Acupressure uses physical pressure, rather than acupuncture needles, to target certain areas of the body thought to relieve pain or illness. The practice has shown promise for easing nausea, vomiting, and some chronic pain, but more rigorous studies are needed to be sure.

This particular trick is meant to activate the large intestine 4 (LI4) acupressure point, located in the valley between the pointer finger and thumb, Tadavarthy said in an interview with Buzzfeed.

Some TikTokers had success with the trick

Other TikTok users have responded to Tadavarthy's video with their own experiences trying the acupressure hack.

@ClaudiaKathryn, for one, gave it a shot when she was bloated and irregular after returning from a vacation. She said she rubbed her hands together for three minutes and waited fifteen more to see if she would poop. She was successful, and even showed off her newly flat stomach after going to the bathroom.

You can do the massage while sitting on the toilet, or try it a couple times a day if you're chronically constipated, Tadavarthy said in the original video.

If the motion doesn't work the first time you try it, you might need to keep doing it a couple times a day for up to two weeks, Tadavarthy added when she spoke with Buzzfeed.

Don't try this at home if you're pregnant

Although constipation is a common problem reported during pregnancy, pregnant people should steer clear of this particular trick, Tadavarthy told Buzzfeed.

Stimulating the LI4 acupressure point can cause the uterus to contract along with the colon, she said. Pregnant people should avoid anything that causes unwanted contrations, which can lead to early labor.

However, if you're overdue and have a doctor's OK, the same acupressure trick can be used to intentionally induce labor.

Tags:  how to sit on the toilet when constipated