Small Sites, a city program that promises to combat displacement, was dubbed by policymakers as fundamentally good, but “broken,” just a few weeks ago. Not long after, its fate was swept into drama and so-called “political games.” Good thing I love both! Let the games begin!

San Francisco, we have a problem

The Small Sites Program is a city loan program that helps nonprofits acquire and rehabilitate residential buildings with fewer than 25 units. Since its inception, advocates championed it as a powerful anti-displacement tool that kept low-income tenants in place, and magically kept units affordable forever.

Already, the city dedicated $10 million for the program this fiscal year, and promised another allocation up to $10 million to carry acquisitions through June, 2022.

Drama brewed, though, when Supervisor Dean Preston asked the Board of Supervisors to earmark an additional $64 million of reserve funds toward the program in a recent vote. Meanwhile, Mayor London Breed, who maintains the sole power to spend the $64 million, told supervisors that even if the increase passed, she wouldn’t spend the funds; she wanted to spend reserve dollars cautiously.

Amid pressure to clinch enough votes to override a mayoral veto, the supervisors ultimately approved the added $64 million in an 8 to 3 vote, but not before they laid bare the program’s largest and most urgent issues in a spirited discussion. The one that warrants the most immediate attention: vacancies.

Yup, in a time when everyone and their dog is upset about San Francisco’s lack of housing — specifically affordable housing — vacancies abound in a program that includes more than 40 buildings and 350 units.

This should make you mad. There’s no excuse for dozens of affordable, ready-to-move-in units sitting empty when scores of San Franciscans, some at risk of eviction or displacement, could live there.

The Mission Economic Development Agency, a nonprofit that holds the lion’s share of Small Sites properties, said roughly 30 of their 287 Small Site units are in the process of leasing, meaning they’re vacant for now. That’s about 10.4 percent. Certainly, Covid-19 exacerbated these across the market; however, similar vacancy rates existed pre-pandemic, said Johnny Oliver, MEDA’s Associate Director of Community Real Estate.

Sure, market-rate vacancy rates are comparable at present, and maybe it’s not realistic to expect every unit to be fully leased up 24/7. But it’s a problem when nonprofits say it takes anywhere between three and six months to fill a vacant unit, especially when we know it financially hurts the program and there’s people who could use affordable housing now. If we can speed up the filling process, why don’t we?

So how does this happen? According to multiple nonprofit organizations acquiring these sites, two obstacles prevent filling vacancies quickly: a policy we’ll dive into later, and DAHLIA, the city’s affordable-housing lottery system.

Peter Cohen, the co-director of the Council of Community Housing Organizations, said he and other organizations sent a list of Small Sites reforms to the Mayor’s Office of Housing on Aug. 31, though conversations about resolutions began as early as January. But like mayor’s offices in the past, the office has been “rigid and unwilling” to reform it, Cohen said.

“What is the reason they are stalling?” he asked. 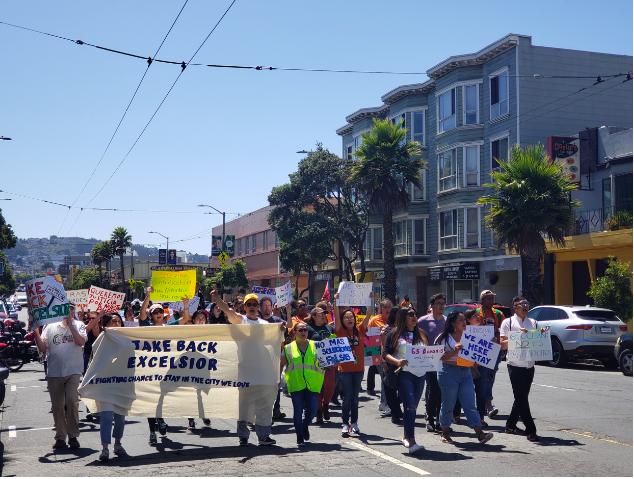 As supervisors and housing advocates point out, neither the problems nor the solutions appear insurmountable.

One complication leading to lengthy vacancies is the program requirement that the average of all the unit rents within a Small Sites building equal 80 percent of the area median income (AMI). For example, if there’s one vacancy in a four-unit building, and two tenants earn 60 percent of the AMI, and one makes 80 percent, the last vacant unit needs to be marketed at a higher rent of 100 percent AMI to meet the standard (To put things in context, to qualify for 80 percent AMI for an individual in San Francisco can earn a maximum of $74,600.)

The problem here, advocates say, is that very few people making between 100 to 120 percent of the area median income apply to Small Sites. “As you go up higher on the AMI list, you see less” applications, Oliver said of MEDA’s portfolio.

This could be because higher-income earners are turned off by an arduous affordable housing process. Lower-income residents are more motivated to jump through hoops like a lottery and income and background checks. But those with more resources “will go with market rate options versus something with restrictions,” Oliver said, stretching out the filling process.

Other nonprofit staff and housing organizers surmise higher-income tenants have stigma. One property on Turk Street being leased through the Community Land Trust had 968 applications for units marketed at 55, 60 and 80 percent of the AMI. However, the 80 percent unit has sat vacant since February. Interested tenants refused the unit once they discovered the property has no parking and is in the Tenderloin, a staff member said.

Recently, the Mayor’s Office agreed to market it at a lower rate, the staffer said. This is a solution that could have happened months ago, and can apply beyond this one property.

‘You have vacancies draining your reserve every single year‘

Another culprit exacerbating vacancies is the city’s affordable housing lottery, DAHLIA, said Supervisors Ahsha Safai and Myrna Melgar, who praised Small Sites but voted no on the $64 million in additional funds because they wanted reforms first. They zeroed in on DAHLIA’s structure: Each unit requires a separate application, marketing plan, lottery and vetting process, which can delay occupancy. Few know this like Saki Bailey, the executive director of the SF Community Land Trust.

Since February, Bailey said she and her team reviewed more than 240 applicants for five vacant units on the Turk Street property, and still two units are empty. This is a problem, because vacancies lead to money issues for the whole building. Intuitively, a single vacancy can wipe out a quarter of cash flow for a four-unit apartment, Bailey said. Filling vacancies grows trickier when it’s within a shared-housing building, she added.

Dire times like the pandemic worsen these situations; earlier this year, the Mayor’s Office of Housing paused its relationship with MEDA after Small Site vacancies and nonpayment of covid rent made it hard for the nonprofit to keep up with debt service. The organization is back on track, its spokesperson said.

Nevertheless, MEDA’s situation became a prime talking point in the Board of Supes discussions about Small Sites and its financial feasibility (and one could argue was painted as a cautionary tale). “It’s like: Wait a second, you have vacancies draining your reserve every single year,” Bailey said, referring to how vacancies were largely left out of the conversation. “Talk about what we need to do to fix the problem.”

We’re all trying to find the guy who did this!

“These are not new issues, and the solutions are not big revelations,” Cohen said. Still, the mayor’s office politely resists, he said. “This is a policy decision of MOHCD. What’s broken is their attitude.”

Interestingly, the same day supervisors voted to approve the $64 million, the mayor and Supervisors Melgar and Safai released a “plan” to strengthen Small Sites. That plan not only admitted Small Sites endured “challenges,” but emphasized that the program is under the Mayor’s Office of Community Housing and Development control, an office overseen by the mayor, according to their press release. The mayor sat down with nonprofit partners, it said, and the release promised a study and to implement reforms slated for March, 2022. The press release commits to “considering reform recommendations from the City’s housing partners,” and “ensuring that vacant units are immediately filled.”

To me, it reads a bit like a viral sketch from the show “I Think You Should Leave,” in which a wiener-shaped car crashes through a storefront, and the alarmed crowd tries to find the perpetrator. Suddenly, a man dressed as a hot-dog feigns shock and exclaims, “We’re all trying to find the guy who did this!”

When I asked for solutions, an emailed statement from the Mayor’s Office of Housing said it would “identify additional opportunities” and work with partners to ensure flexibility. “Both the City and our affordable housing partners remain committed to our shared goal of leasing up these units as quickly as possible.”

Others aren’t impressed. One skeptical Board of Supervisors legislative aide called it “leading through press releases” that rarely result in action. Another official questioned the office’s willingness to solve outstanding issues. Bailey said she spoke to city officials, but got nowhere.

Still, Melgar is optimistic. “I have the mayor’s commitment that we are going to do [reforms] in good faith,” she said.

Tags:  how to speed up toilet refill