Teen Fools The World With Tweets From LG Smart Fridge 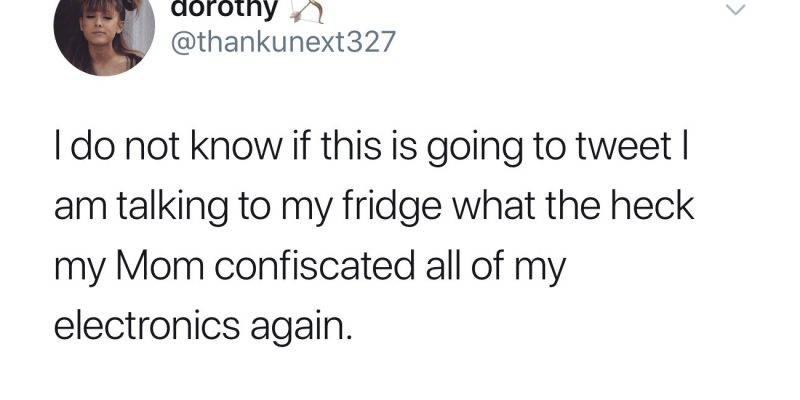 In a world where smart appliances are popping up every other day, it’s not hard to believe that someone would send tweets from a refrigerator – actually, it’s considered pretty cool and will easily get a lot of attention, as one tweep, Dorothy, found out.

Dorothy, aka @thankunext327, is a self-proclaimed Ariana Grande fan account that recently shot to “fame” after a series of tweets sent from various smart devices narrating escapades of trying to stay connected to Twitter after the account owner’s phone was confiscated.

According to initial reports, Dorothy is a 15-year-old girl, who just uses the account to proclaim her love for Ariana. As it happened, on August 5, 2019 at 3:16PM (EAT), a tweet was sent out from Dorothy, bidding her followers goodbye saying that she’s leaving forever after her mom took her phone away. The tweet source shows the device was used was a Nintendo 3DS.

I seen that Dorothy has been using twitter on her Nintendo. This account will be shut down now. pic.twitter.com/L4JqNYhUHe

The drama doesn’t end there. The following day, August 6th, Dorothy tweets from her Wii U. The tweet was alerting followers that her phone and Nintendo had been confiscated and now all she had to use was her Wii U, promising to respond to DMs and follow back new followers after she got a “stable connection to twitter”.

A few hours later, another tweet, one of excitement. Dorothy reports that her mom is at work and she’s now busy looking for her phone – this tweet was seemingly sent from her Wii U once again.

hey guys omg. my mom is at work so i'm looking for my phone. wish me luck. lov u #Mii #MiiMaker #WiiU pic.twitter.com/BaaAWUUjoV

About two hours after she started scouting for her phone, she reports back that she’s found her Nintendo 3DS instead, the device which she used to send out the tweet this time around. She further tells her fans that she’ll be visiting her friend, which means she’ll finally have a “stable connection to twitter”.

This was followed by another tweet, less than an hour later promising to follow back her fans so that they can be “mutuals”:

yall are so fckn sweet, ill fb tonight so we can be mutuals, see u. TO FREEDOM! #ACNL pic.twitter.com/QdUTDKYZMP

At this point, the hashtag #FreeDorothy was already trending, with a number of influential Twitter accounts, including Twitter’s official account and LG Electronics taking part:

By this time, tweeps were seemingly impressed by Dorothy’s resilience to stay online despite all the confiscation that was going around. The last stroke was when she seemingly tweeted from her smart fridge after all her electronics were under lock and key:

I do not know if this is going to tweet I am talking to my fridge what the heck my Mom confiscated all of my electronics again.

As much as this seemed to excite a good number of people, critics were now raising eyebrows as something did not quite add up. The last tweet from her LG Smart Fridge was the one below, thanking Twitter and her fans for the support…

I don't know how I got this much support thank you so much to my supporters and @twitter this is crazy I would be lost without you and given up. I'm trying to get my things back fast so I can thank you properly!

But all this might have actually been faked. A report by BuzzFeedNews later revealed that Dorothy might not be quite what she says she is, actually, it might not be a teenage girl behind the account after all. Prior to this, “Dorothy” had done virtual interviews with mainstream media outlets such as The Guardian.

Her story is that her phone had been initially confiscated after she caused a fire while cooking because she was distracted. The story was reported by even more mainstream media, including BBC.

Things start to get questionable after Dorothy refused to reveal her second name, she also refused to reveal the model number of the smart refrigerator she was allegedly tweeting from and eventually called out BuzzFeed for being rude through their questioning.

See, what tweeps might have missed is that it’s fairly easy to fake tweet sources (that via bla bla bla link) using a simple code that can be copy/pasted from various sources. There’s actually a detailed explainer on Reddit on how to do it and within a few minutes, you could be tweeting from the ISS for all we know or from a Gucci smart toilet as seen below:

To further stamp the suspicion that Dorothy’s tweets were faked, LG confirmed that there’s no Twitter app for any of their smart fridges.

We know, it’s heartbreaking just to think that someone would excite Twitter this much only to be stamped as fake. As much as there’s no admission of guilt from whoever is behind the Dorothy account, we can confidently say that not everything you see on social media is what it says it is.

We, however, have to give it to Dorothy for the smarts. Fooling people across the world is not an easy job and for that, she deserves credit.