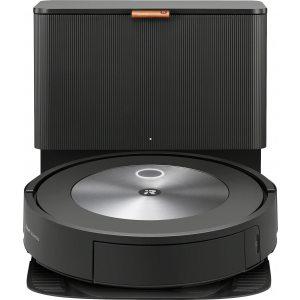 Unreliable pet? The reliable Roomba j7+ will steer away from accidents while still cleaning up well.

Unreliable pet? The reliable Roomba j7+ will steer away from accidents while still cleaning up well.

Pet poop. It’s the secret fear of every robot vacuum owner as it likely spells death for your device and a very gross mess smeared all over your floors. The iRobot Roomba j7+ seeks to banish that fear for good with new obstacle avoidance technology that promises to specifically identify pet waste and other objects and veer around it. While it’s not the first robot vacuum to avoid treacherous obstacles, it learns from its cleaning runs, which earns it a spot on ourbest robot vacuums list. Paired with a new self-emptying Clean Base, our iRobot Roomba j7+ review found a robot vacuum that’s ideal for homes with accident-prone pets and the people who love them.

The iRobot Roomba j7+ includes both the robot vacuum and the self-emptying Clean Base. It’s available for $819 on Walmart.com. The Clean Base comes with one dust bag installed and a spare tucked away under the lid. iRobot estimates that each bag will last up to 60 days before needing to be replaced. Additional bags are available in a pack of three from iRobot.com for $19.99. Don’t want the roar of the self-emptying Clean Base? The Roomba j7 is available without it for $492.

iRobot switched things up with the Roomba j7+ by moving the navigation sensor to the very front of the robot, recessed into the top of the front bumper. This change gives the bot its obstacle detecting ability — the superpower of the Roomba j7+.The sensor is made even more noticeable by the LED headlight that illuminates the vacuum’s path while it cleans. Though the light was jarring at first, especially in rooms that weren’t well lit, I got used to seeing the Roomba j7+’s headlamp explore my floors quickly. 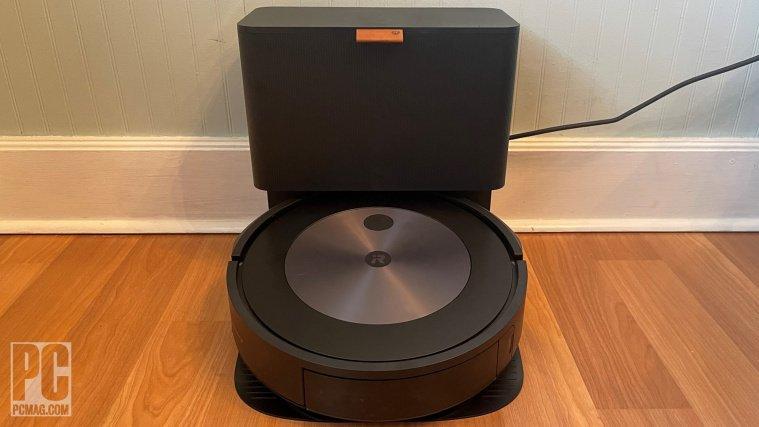 Aside from the sensor placement, the iRobot Roomba j7+ looks strikingly similar to the Roomba i3+, with its disc within a disc design. But the Roomba j7+ has traded basic grey for classy matte black with a dark grey brushed metallic-looking center disk. In the center sits the iRobot logo, with a single button for starting and stopping cleanings above the logo. That button is outlined in white light when the vacuum is cleaning, blue when heading back to the dock, and red when there’s an error.

The underside of the iRobot Roomba j7+ is nearly identical to the Roomba i3+, with a tri-spoke brush on one side, an omnidirectional wheel at the top, and two green rubber roller brushes in between chunky black rubberized wheels. A bevy of sensors dot the edges.

While the robot vacuum component of the iRobot Roomba j7+ may not look too different, the self-emptying Clean Base has gotten a much-needed makeover. The new Clean Base is shorter and more squat than the previous iteration, measuring just 13.25 inches high compared to the older base’s 19-inch height. The top of the new Clean Base opens via a classy brown leather pull tab. In addition to the dust bag that’s in use, there’s storage for spare bags. It’s a small touch, but when you’re only emptying the bag every two months or so, it can be hard to remember where you left the extra dust bags.

One thing the updated Clean Base has in common with its predecessor: It’s still incredibly loud. Every analogy to planes taking off still feels apt. Mercifully, the bin emptying process is short, lasting less than 10 seconds.

The iRobot Roomba j7+ turned in a solid performance in both our hardwood and carpet lab tests, earning an overall average score of 91.81. It was slightly better than theRoborock S6 MaxV’s score of 90.56 and the similar, but non-mapping, Roomba i3+’s score of 90.1. But it wasn’t quite as good as the 96.25 earned by our current best overall vacuum, theRoborock S4, nor did it surpass theRoomba s9+’s score of 96.83.

But even though it can avoid pet waste, it wasn’t as good as the best robot vacuums for pet hair, as it only picked up 82.5 percent of our dog’s fluff.

Still, the Roomba j7+ was a relatively fast cleaner as it zigzagged back and forth across my floors. It didn’t get tripped up by rugs and, thanks to its upfront camera, didn’t get tripped up by small obstacles, such as the fake dog poop I dropped in its way. It did not recognize a medium-sized dog toy as an obstacle, however, with software updates, it should learn to recognize objects such as these as well as shoes and socks down the line.

Despite its obstacle avoidance technology, the iRobot Roomba j7+ was remarkably forceful when it bumped into furniture and walls. The test corral is made of four pieces of wood that are partially held in place by walls on two sides and five-pound weights on the other two sides. The Roomba j7+ repeatedly slammed into one of the weight-secured sides hard enough to push the weight out of place. Though it approached walls and furniture more gently after mapping, the initial force of it took me by surprise.

Like most robot vacuums, the iRobot Roomba j7+ did best on bare floors. It picked up 97.3% of the Cheerios strewn about the test area, just edging out the Roborock S4 Max, but falling just below the S6 MaxV and theEufy RoboVac X8 Hybrid. The Samsung JetBot AI+ and the Roomba i3+ earned perfect cereal pickup scores on hardwood.

On dog hair, the Roomba j7+ was equally impressive, cleaning up 92.5% of the golden retriever hair in the test area. While it didn’t pick up all of it, like the Roborock S4 Max and the Eufy RoboVac X8 Hybrid did, it out performed the Roborock S6 MaxV’s 78% pickup rate.

Comparatively, the Roomba j7+ could have been better on kitty litter on bare floors. While it picked up a respectable 94.45%, the Roomba s9+, the Samsung JetBot AI+, and both the Roborock S4 Max and S6 MaxV all did a better job. It came close to the Roomba i3+, which cleaned up 95.7% of the litter.

The iRobot Roomba j7+ mostly held its own in the carpet lab tests, earning a 99.35% pickup rate for cereal and a 94.75% pickup rate for kitty litter. Its scores are almost identical to its sibling, the Roomba i3+, which earned a perfect 100 picking up cereal on carpet and a 94 picking up litter. The Roomba j7+ stumbled a bit with dog hair, collecting 72.5% of the fur off of the carpet test area. Though it performed better than the Roomba i3+, it was below the Eufy RoboVac X8 Hybrid’s score of 89.5 and the Roomba s9+’s impressive 97% clean up rate.

The iRobot Roomba j7+ is controlled by the iRobot Home app (Android andiOS). The app has plenty of features presented in a non-intimidating way, but if you’re looking for more granular controls like the ones found on the Samsung JetBot AI+, such as cleaning around furniture or cleaning around walls last, you’re out of luck.

Connecting the iRobot Roomba j7+ to the iRobot app and my home network was quick and easy, thanks to on screen prompts within the app that guide you through the process. The robot connected on the first try and I was invited to give it a name.

Other robot vacuums like the Samsung JetBot AI+, the Roborock S6 MaxV and the Eufy X8 Hybrid use a LiDAR sensor to quickly map a floor’s layout — typically generating a nearly complete map after just one run. iRobot used VSLAM technology in earlier models and the company says the Roomba j7+ uses PrecisionVision Navigation. This is why Roombas need light to clean accurately, while other bots do not. It’s not a big trade-off, as after three runs the app generated a faithful map of my first floor. More impressively, it created mostly accurate room divisions in spite of my mostly open floor plan.

I was able to easily add and remove room divisions, too, though the experience differed compared to other robot vacuum maps. Instead of manipulating the line to create the room division, the app gives the impression of moving the map around underneath the line. If you think about the map as one layer and the dividing line as a layer on top of it, it’s the feeling of moving the bottom layer to satisfy the top layer instead of the other way around. It’s a little disorienting to get used to, but it worked well.

The big new feature in the iRobot Roomba j7+ is obstacle avoidance. iRobot advertises it with its “Pet Owner Official Promise” or “P.O.O.P.” The company promises to replace your robot should the unthinkable happen in the first year of ownership. While the Roomba j7+ did avoid my fake dog poop obstacle multiple times, it also identified cords and other lower stakes obstacles like tennis balls. But it didn’t just alert me to the presence of obstacles — it asked how it should handle those obstacles in the future.

After a cleaning run, a phone notification popped up asking me to review the obstacles found by the bot. The app displayed an image taken by the Roomba j7+’s camera with the offending item highlighted. Then I was given four options: Temporary obstacle here; Add Keep Out Zone; No obstacle here; or I’m not sure. After labeling a tennis ball as a temporary obstacle, the app offered the option of cleaning that area again.

The Samsung JetBot AI+ offers the same tidying up service after encountering obstacles and it’s helpful. But what I found more useful with the Roomba j7+ was the ability to automatically add Keep Out Zones after it identified an electrical cord. It is very much a set-it process and way easier than trying to guesstimate where a no-go zone should be drawn on a map. Another bonus — it saves time picking up for the robot before letting the Roomba j7+ loose in the house.

In addition to room-specific cleaning and setting a regular cleaning schedule, the Roomba j7+ is able to start or finish a cleaning based on the location of your smartphone or the actions of other smart home IFTTT devices, such as a smart garage door opener.

The Roomba j7+ also has Imprint Smart Mapping, which allows you to trigger the iRobot Braava jet m6 robot mop to wash the floors after vacuuming.

I’ll say it — iRobot’s “P.O.O.P” promise seems hokey. But I was impressed with the Roomba j7+’s mapping prowess and cleaning smarts. It performed nearly as well as the $1,100 iRobot Roomba s9+, but includes obstacle avoidance and a more attractive Clean Base. The Roborock S6 MaxV offers similar cleaning performance and obstacle detection, including identifying objects as pet waste, but it doesn’t learn from its cleaning runs like the Roomba j7+. However, the S6 MaxV has been available for a while and the price has dropped to $489, making it a more affordable option.

While its pet hair performance on carpet could be better and, at $849, it’s not the cheapest option, there are more than enough upsides to the iRobot Roomba j7+ to heartily recommend it and to warrant a place amongst ourbest Roombas.

Meghan McDonough is a journalist who currently tests and writes about robot vacuums. Since 2008, she’s written about laptops, mobile phones, headphones, speakers, and other consumer tech. When she sees an unfamiliar device, Meghan has a habit of asking complete strangers, “What is that? Does it work well for you?”In her spare time, Meghan enjoys seeing live music, tending to her garden, and playing endless games of fetch with her Goldendoodle, Duke of Squirrel.

Tags:  how to create floorplan for samsung robotic cleaner