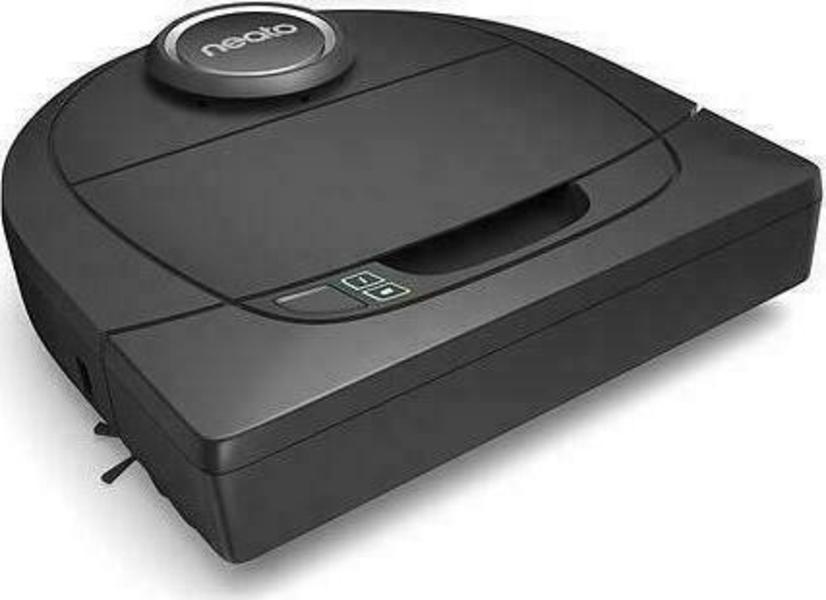 (Pocket-lint) - Robot vacuum cleaners are becoming more popular with several big players now in the market, including Dyson. Some are great, others not so much, but all of them are pricey, typically costing upwards of £600.

Neato brought the cost down a little with the introduction of the D3 Connected and D5 Connected at the end of 2016 though, both offering Wi-Fi connectivity for a starting price of £399. We've been living with the D5 Connected for the last month to find out if it's a robot we can't live without.

The Neato Botvac D5 Connected features a familiar design and form factor. Unlike many competitors, Neato's D Series models are D-shaped allowing them get right into corners, something circular models like the Dyson 360 Eye and LG Hom-Bot rely solely on their brushes to do.

The D5 Connected sits in the middle of Neato's Connected range. Above is the Botvac Connected with its more premium look and finish; below is the D3 Connected with a lower price point and a more plasticky finish.

Opting for an all-black finish like the Botvac Connected, the D5 Connected has the same apparent joins between panels and the raised circular disc with the centralised Neato logo sitting on top, housing the LaserSmart Mapping and Navigation technology that figures out the best way to clean your home.

There is no display next to the raised disc on the D5 Connected as there is on the Botvac Connected, though, reducing functionality through the robot itself and transferring it to the app instead - but more on that later.

The dirt bin is also different, featuring a textured matte finish over the smooth, glossy finish featured on the 2015 model. Despite a difference in appearance, however, the same principal applies for emptying it and cleaning the filter. As per the Botvac Connected, the D5 Connected has the same filter design making it easy to pop out, as well as a mesh screen to keep dirt from accumulating.

Two small lights sit next to the start button in the form of a battery indicator and information indicator. The lights will appear in different colours depending on the message. For example, if the battery light is green, the robot is charging; if the information light is blue then the robot is in pairing mode.

Turn the D5 Connected over and you'll find Neato's Combo Brush that encompasses the entire width of the robot, unlike some cleaners such as the LG Hom-Bot. The D5 Connected misses out on the Spiral Blade Brush, which is present on the Botvac Connected and the D Series, but it has a side brush for getting deeper into the corners.

As with previous Botvac models, the D5 Connected has a magnet positioned on its rounded edge that will connect to the relatively small and discreet docking station. This is the D5 Connected's home, where it will return after a clean to recharge ready for the next cleaning session.

The Neato D5 Connected offers many of the same features as other models within the D Series, while also incorporating a few extras, such as the obvious Wi-Fi connectivity. It misses out on a few from the Botvac Connected, however, like Amazon Alexa compatibility and the manual cleaning mode.

House cleaning mode and two spot cleaning modes are on board. The former uses the Botvision laser navigation technology to plan the best route, day or night. The D5 Connected will scan and analyse the area surrounding it, plan an efficient path, and then clean in 15 x 15-inch square segments until the entire room is clean.

Another technology called SLAM is on board to help the robot work out where it has and hasn't cleaned so if the battery runs out, the botvac will recharge and then return to where it left off.

You can schedule the D5 Connected too, as you can with most robot cleaners, with its Wi-Fi connectivity makes scheduling very simple. You can set various times and days for the vac's cleaning routine using the app, as well as set repeat cleaning days, such as every Saturday at 9am. 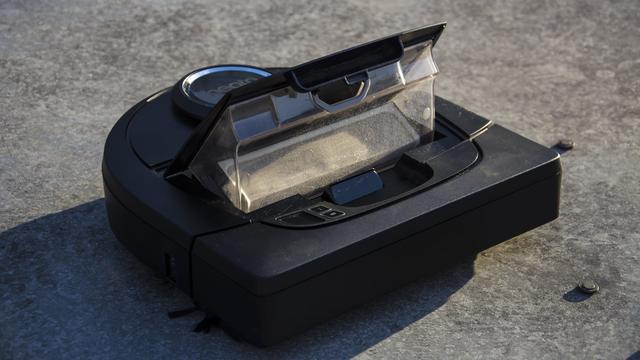 Notifications are also sent to your smartphone when the D5 Connected finishes its clean, as well as when it is stuck. Unfortunately, if the D5 Connected gets stuck when you aren't home, it will be waiting until you get home to free it before it can resume its cleaning routine. It's worth putting down the boundary markers included with the box to ensure it avoids things such as cat bowls or stairs.

The boundary markers are black, around an inch wide and they are simply cut and placed where needed. They aren't the subtlest, but they are less fiddly to setup than LG's 'light houses'.

The Neato D5 Connected performs very well most the time, though not quite as well as the Botvac Connected and its turbo mode. That said, the D5 dealt very well when moving from wood floors to tiles to carpet, including the high-pile rug we have in our living room (which has been an issue for some other robot cleaners).

After the D5 Connected finishes its clean, our floors were almost spotless. It occasionally missed a few bits here and there and there were times when that living room rug was just that little bit too much for it, but these were rare occurrences. Robot cleaners don't have the same suction power as traditional vacuum cleaners and they can't handle stairs so while the D5 Connected won't be replacing your Henry or Dyson any time soon, but it will make sure your home stays looking tidy in-between big cleans.

Like the Botvac Connected, the D5 Connected struggled with the base of our bar stools, however, often finding itself stuck in between them and in need of rescuing. This wasn't a problem when we were home and able to free it upon receiving the "I'm Stuck" notification, but it's a little more annoying when out. As was the case with the 2015 model, the D5 Connected has no cameras so you can't tell where it has got itself stuck, nor does it offer remote manual control, meaning there is nothing you can do to free it until you get home.

It's certainly not a deal-breaker, unless of course you get home to find the robot stuck on your cat, but we'd love to see a solution added for future models, especially as its more convenient to have the D5 Connected go about its cleaning when you aren't home. It isn't overly noisy but you certainly know it's there. There's no eco mode on this model, so no option for a slightly quieter clean.

We also had a couple of issues with connectivity. Occasionally our robot would go offline, which meant the app was entirely useless and the only way to start and stop a clean was to push the button on the D5 Connected itself. Without the app, it's not possible to schedule or send the robot back to the dock. Reconnecting is pretty easy, though, and only takes a couple of minutes when the robot is back in pairing mode.

Battery life was impressive. The li-ion battery within the D5 Connected is said to be capable of covering 4500sqm before it needs a recharge, which was plenty in our experience, even if it is 500sqm less than the Botvac Connected.

The Neato app is available for iOS and Android devices and is more pertinent with the D5 Connected than it was with the Botvac Connected. The lack of screen on the D5 Connected means all the control, except start and stop, is actioned through the app.

Luckily, navigation is very simple. When your robot is online a large start button will allow you to start a house clean and if you want to stop the clean or send the robot back to its dock before it is finished, both options sit below the start icon.

This is a great option if you're looking for a new video doorbell.

You can add another Neato robot by tapping the "+" in the top right corner, or change the associated email address and login password by tapping the option menu in the top left. This menu also features scheduling. It's also possible to change the name of your cleaner here.

The Neato Botvac D5 Connected is a good little cleaner, it's just not as good as the Botvac Connected, which is now cheaper and therefore around the same price as this newer model.

Battery life and cleaning performance are both great on the D5 Connected and the intuitive app makes this connected robo-vac a pleasure to use. Scheduling is easy, app response is quick and while the D5 Connected needs a little more babysitting than the Botvac Connected, it crosses between varying floor surfaces with ease.

A few features are lacking, however, such as manual control, Amazon Alexa compatibility and the ability to free the D5 Connected when it's stuck, but this robot cleaner does what you need and does it well.

As a top-up vacuum, the D5 Connected is a great option to consider and one we will miss when it gets returned to its makers. That said, the Botvac Connected makes better sense to buy with its extra features, premium design and (now similar) price tag.

The alternatives to consider

Some 16-years in the making, Dyson has concentrated on making a robotic vacuum cleaner that is a cleaner first and a robot second. For all its good though, the 360 Eye is pricey. Its £799 asking price is more than most other robo-vacs even if it is better than most of its competition. That said, for what it is designed to do, the results are impressive, making it one of the best robotic vacuums on the market.

The Botvac Connected is Neato's more premium robot cleaner and it is an excellent one at that. It not only manages to seamlessly cross between varying floor surfaces, but it leaves them clean and it's able to cope well enough without being babysat. Its controllability also goes hugely in its favour with a fantastic app that makes this robot cleaner a delight to use and a drop in price that makes it a definite alternative to consider.

The LG Hom-Bot Square is a great looking robotic vacuum cleaner that is packed full of features and offers a decent performance and battery life. It's very easy to use and the charging dock and remote control all offer a seamless design that we were happy to have on display in our home. If you have a house that features more deep-piled carpets than any other surface, you will probably be better off with a different solution, but if you have a relatively clutter-free house with either laminate flooring, tiles, or normal carpets, the LG Hom-Bot Square is a great addition.