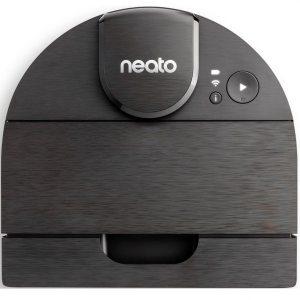 Cool, calm and collecting dust — that’s the immediate impression I got from the Neato D9. The company hasn’t changed its distinctive D-shaped design and that’s a good thing.

Unlike other robot vacuum manufacturers that tend to center the brushroll between the wheels, Neato places its 11-inch brush at the D9’s widest point, which measures 13.22 inches. The long straight edge allows the D9 to get up close and personal with your baseboards.

The Neato D9 is a classy robot. It’s dressed in understated black with what the company calls a “brushed metallic finish.” To me, it looked more like simulated wood grain, but either way, it’s attractive. The brushed finish adds to the premium look — it’s a huge improvement over the matte black found on the older Neato D4. The top of D9 features a raised laser cover emblazoned with silver “Neato” branding. To the right of that is a green battery light, a white Wi-Fi light, and an information button. A large start/stop clean button rounds out the onboard button options.

The dustbin on the Neato D9 is cleverly concealed in the center of the robot. It’s actually integrated into the center panel of the robot’s lid. Though it was a little surprising the first time I pulled it open to empty the dustbin, I quickly got used to it. It’s also designed in such a way that debris won’t fall out as you remove it. Instead, the D9’s ultra performance filter serves as the door for the dustbin. According to Neato, this filter will trap 99.5% of allergens and dust particles. Though the more expensive Neato D10 touts a HEPA filter, you can order a four pack of replacement HEPA filters that are compatible with the D9 for $39.99 from Neato’s website.

The underside of the Neato D9 has the aforementioned bristle and rubber-finned brushroll along its widest edge. A plastic cage holds it in place, but it is easily removed using both index fingers for cleaning the brush. A very small spoked side brush sits to the right. Two large rubberized wheels sit just behind the brushroll and two small, single direction rubber wheels guide the rounded rear of the vacuum.

Though we liked the dock included with the Neato D4, the company updated the docking station for the D9. Immediately, my favorite feature of the new dock is the integrated holder for the brush cleaning tool on the back. Cleaning tools are invaluable for keeping a robot vacuum in tiptop shape and I always appreciate when manufacturers make them less easy to lose. The new base still has two large metal contact bars along the lower half and a sensor window above them, but it is thinner and less noticeable along a wall. Unfortunately, I found that the Neato D9 had a greater propensity to push this base around my hardwood floor while cleaning and docking. Several times I found the vac had moved the base away from its position flush against a wall. On the plus side, the D9 still docked itself, but the base was at 45 degree angle from where it was originally placed.

The Neato D9 performed well in our lab tests, earning an overall average score of 92.79 — slightly more than the iRobot Roomba j7+ (91.81) and the Eufy RoboVac X8 Hybrid (92.39), but still a few points below the Roborock S4 Max (96.25). Compared to the older Neato D4, the D9 was much more efficient at collecting kitty litter from hardwood and carpet.

In addition to its strong overall cleaning performance, the Neato D9 was relatively quiet and a reasonably fast cleaner, averaging 2 minutes and 56 seconds to complete a run in the 5-foot-by-5-foot test area. The robot cleans in a methodical pattern, going around the edges first and then cleaning the central area in a serpentine pattern.

On hardwood, the Neato picked up 96% of the cereal in our test area, slightly less than the Roborock S4 Max (96.75) and the Roomba j7+ (97.3). Similarly, the D9 earned a score of 95.65 for picking up kitty litter from hardwood. It was marginally better than j7+ and the Neato D4, but not quite as good as the Roborock S4 Max. Though the Neato D9 cleaned up 91.5% of the pet hair in our test area, the strong exhaust fan on the rear of the robot sent hair flying around, which wasn’t ideal.

The Neato D9 fared slightly better picking up cereal on carpet, earning a score of 97.65, but it still fell below the perfect scores earned by the Roborock S4 Max and the non-mapping Roomba i3+. The D9 showed massive improvement over the Neato D4 in our kitty litter test. The older machine picked up only 72.9% of the litter, while the D9 cleaned up a respectable 92.95%. But it was less impressive on dog hair on carpet, collecting 83% of the hair; 10 points more than the Roomba j7+, but not as much as the S4 Max’s 88% pickup rate.

Neato has a new app to go along with the D9 (and the D8 and D10) called MyNeato (Android andiOS). It’s a much needed improvement over Neato’s previous app, which generated maps that looked like an 8-bit video game. MyNeato requires you to login with an email and password, but after completing that step, it clearly guided me through the setup and Wi-Fi connection process. Within just a few minutes, the Neato D9 was connected to my network and, after charging, it was off and cleaning.

Impressively, the Neato D9 returned a nearly complete map after its first run. Subsequent runs refined the map and even slightly decreased cleaning time. Though the bot created an accurate map of the first floor of my home, dividing the floor into different rooms was up to me. Unlike Roborock, Eufy, and iRobot, Neato doesn’t automatically divvy up a floor plan into rooms for zone cleaning — that’s your job. Thankfully, it’s relatively easy, though not super intuitive.

To divide up a floor plan in the MyNeato app, tap on the pencil button in the upper right corner next to the map on the homescreen. From here, tap the button “Add zone.” You’re able to resize a box to create different spaces on the map. One box can overlap another and the box can go beyond the edges of the map. Since you’re only able to draw squares or rectangles, it’s a necessary allowance. However, when enlarging the map to refine the lines of a zone, the app mistakenly moved a different zone. For example, when creating the zone for my bathroom, I used two fingers to enlarge the map. Because one of them was near the living room zone, the app moved that box out of place. I moved it back, but it became more of an issue as I created zones for each room and ran out of zone-free space on the screen to touch.

iRobot, Roborock, and Eufy differentiate between rooms and zones. The Neato D9 does not. For example, both the Roborock S4 Max and the iRobot Roomba j7+ are able to clean my whole kitchen floor or just the zone in front of the sink. That isn’t an option with the Neato D9 — you can’t tell it to clean a smaller area within another area.

Another quibble: The app defaults to adding a no-go zone, which is confusing if you thought you were specifying areas to clean. Thankfully, it also asks: “Should the robot clean this zone?” Tap on “Yes” and you’re able to label the zone and select whether the D9 should clean it in Eco or Turbo mode. The zone labels are more for your use than for the vacuum as the app allowed me to name two zones “Kitchen.”

After setting up cleaning and no-go zones, I wanted the Neato D9 to clean my dining room and living room. Not so fast. Though the language in the app (“1 zone selected”) suggests that the bot can clean multiple zones, you’re only able to select one at a time. This quickly became annoying because my kitchen isn’t a perfect square and I made two zones to completely cover it. Unlike most other robot vacuum apps with mapping abilities, it’s not possible to merge two zones into one. In order to only clean my kitchen, I would have to send the D9 on two separate zone runs.

Setting up regularly scheduled cleanings, called Routines, within the MyNeato app is possible, but your options are to clean the entire floor or one zone only. Here again, the language in the app suggests that multiple zones may be selected, but in reality I could only add one.

There are a lot of promises within the MyNeato app, including “Multiple maps coming soon!” in the My Maps section. The user manual also states the D9 has an “Extra Care navigation” option on the Clean mode screen. This option wasn’t present in the most recent version of the app. Hopefully more functionality will be added soon.

The Neato D9 is a good robot vacuum with a solid cleaning performance, but its app holds it back. For $699, the D9 and its app should be a full-featured home cleaning device. Instead, the app offers vague promises of multiple maps and suggests more functionality than it actually has.

It’s a shame because I like the Neato D9 as a robot vacuum. If room-specific cleaning isn’t important to you, the Neato D9 is a good, but expensive, choice. But, if you want to actually use all the features you’re paying for, the $309 top-performing Roborock S4 Max is a better option.

Tags:  what is the best robot vacuum cleaner for pet hair