It's finally sunny again, and spring is on its way. But the sun also has the downside of reminding us to do some overdue spring cleaning in many corners of the home. But if we have to mess with dust and dirt, it's best to do it with brand new equipment, right?

Roborock thought so too and introduced some new vacuum robots. At the start is the new Q-series, which was already teased at the CES in Las Vegas. In addition to the high-end models like the Roborock S7+, the company wants to establish a lower-priced alternative that does not compromise too much on features. A dust robot middle class, in other words.

Right away, some parallels to the S7+ can be noticed: The Q7 Max+ is also a vacuuming and mopping robot with a 470 ml dirt container. With a capacity of 350 ml, the water tank is even bigger than in the S7+. Vacuuming and mopping happen in one wash with this robot: The suction device with an above-average suction power of 4,200 Pa sits in front. At the other end of the device, wiping takes place immediately afterward - with up to 300 g and 30 different water pressure levels. 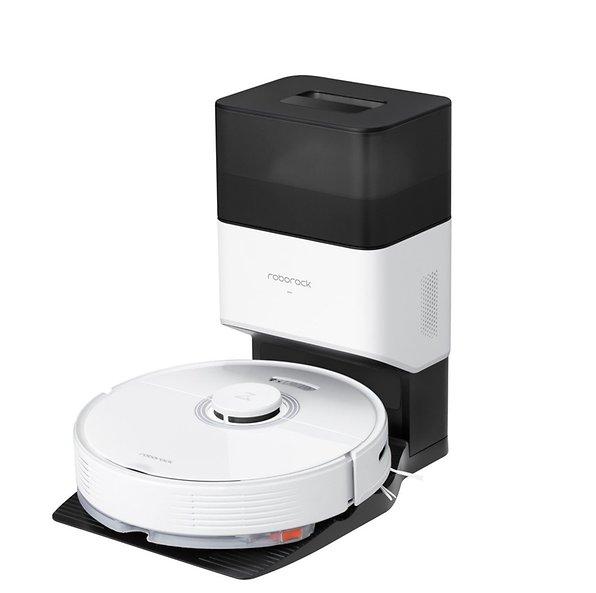 The addition "+" means, as with the S7+, that the Auto-Empty Dock is also included , at which the device is of course charged. Thanks to this Auto-Empty Dock station, you do not have to get your fingers dirty. The dust container is automatically emptied after each cleaning process. You have up to seven weeks until the bag in the station is full!

"We believe that compatibility with automatic emptying will become amust-have for robot vacuum cleaners. In addition to the benefit of less frequent manual emptying, customers are much less likely to be exposed to allergens and dirt that can occur when emptying by hand," explains Richard Chang, CEO and founder of Roborock.

Everything is under control thanks to LIDAR navigation and the app

Of course, those familiar with Roborock devices know that you can access the robot and customize routes via the Roborock app. This is also possible with the Q7 Max+. In addition, certain areas of the home can be blocked via the app, and large furniture is detected and bypassed by the 3D mapping system. The LIDAR navigation system determines the most efficient cleaning route. Customized cleaning routines are also possible.

If you want, you can lock the robot vacuum's buttons with a tap. This prevents children or your pets from accidentally activating the Q7 Max+ or interrupting the program.

All in all, Roborock now offers us a vacuuming and mopping robot above the inexpensive E-series that has more going for it than the entry-level models. You will have to do without some features of the expensive S models in the Q7 Max+, but you will still find great comfort.

Unfortunately, Roborock has not yet announced a price for the Q7 Max+, nor do we know the exact sales start. But it is supposed to start in spring. As soon as we know the prices, we will update this article.

Tags:  which brand of robot vacuum cleaner is the best