Should you buy the Aldi Mistral Thermal Cooker? 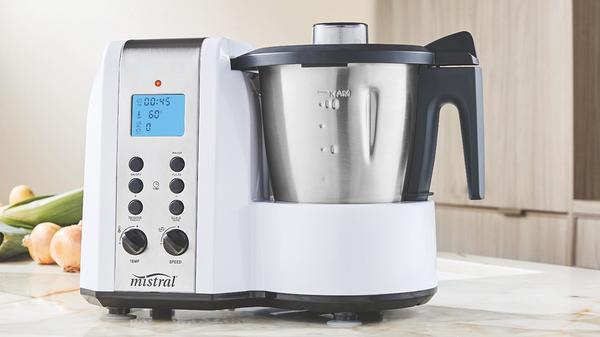 Has spending all this time at home got you thinking about even more ways you can cook up a storm?

Perhaps you've had an eye on an all-in-one cooking machine such as a Thermomix but can't afford the thousand-dollar price tag?

But here comes Aldi. The supermarket is selling its budget version of the Thermomix as a Special Buy this Saturday 18 April for $299.

Billed as eight appliances in one with 10 different speeds, the Aldi Mistral Thermo Cooker is claimed to blend, chop and crush ice, as well as steam, stew, mix, knead and work as a fryer too.

How did Aldi's Mistral thermal cooker score in CHOICE reviews?

Our experts tested Aldi's Mistral product last year as part of our review of all-in-one kitchen machines. At $389, it was by far the cheapest in our test (the closest machine in price was $795 and they can cost more than $3000).

Although we haven't tested the model Aldi is selling this week, it's from the same manufacturer and looks to be very similar with almost identical features. The only difference we can see is that this year's model also has an adjustable speed feature for steaming.

Mixed results for the Aldi machine

Our review last year had mixed results – our testers had both positive and negative comments to make about the machine.

For example, while we rated it as 'excellent' for making risotto and sorbet, and it got good results for making nut butters and green smoothies, overall it was rated 'only OK', with a few safety issues.

Our testers also identified problems such as the need to modify the manufacturer recipes, inaccurate measuring implements, and noisy operation.

CHOICE kitchen expert Fiona Mair says: "When it comes to all-in-one appliances, you get what you pay for."

"Cheaper all-in-one appliance brands such as Aldi's Mistral and Kogan have limited instructions and recipe guides as compared with the more expensive brands, which can be an issue if you've never used an all-in-one appliance before. Using one of these appliances is a different way of cooking and preparing foods, so initially you'll need guidance and specific recipes. These are features that the more expensive brands are better at delivering.

"If you're considering buying an all-in-one machine to replace most of your kitchen appliances, my advice would be to choose a brand that has excellent instructions with basic recipes, plus continued support and updates."

The latest model, the TM6 Thermomix from Vorwerk (which CHOICE experts recently reviewed) retails for $2269. The full Thermomix TM6 review is available for CHOICE members here.

There are other mid-range versions of this type of all-in-one appliance available from brands such as Tefal, Kogan, Magimix, Kitchenaid and more.

The extra outlay for a Thermomix buys you many more features. The TM6 replaces more than 20 appliances, letting you chop, beat, blend, whip, weigh, mill, knead, mince and more.

Here are just some features of the Thermomix:

Should you buy an all-in-one kitchen machine?

Thermomix is undeniably the most recognisable of all the all-in-one kitchen machines, with a premium price tag to match. Despite the fact that it costs more than $2000 and has been plagued with safety issues over the years, it's won many diehard fans who use it in their everyday cooking and food prep.

Despite its safety issues over the years, the Thermomix has won many diehard fans

"All in one appliances combine several appliances into one, which can free up precious cupboard and bench space," says CHOICE home economist Fiona Mair.

"These appliances are great for people who are just starting out setting up their kitchen. But before you buy, I recommend reading our detailed CHOICE reviews of these all-in-one appliances and really think about how often you're going to be using it."

Tags:  how to get stirling robot vacuum cleaner