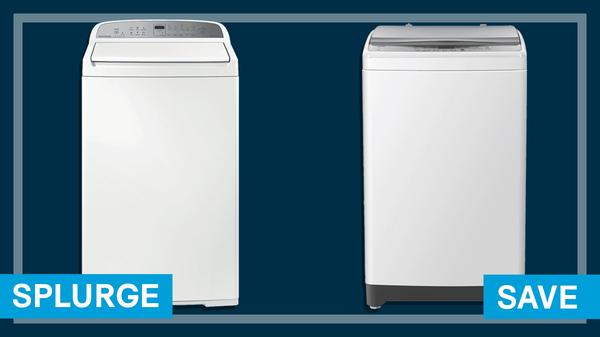 There's nothing worse than picking up a freshly washed T-shirt to discover it's still kind of dirty. But buying the wrong washing machine could cost you more than just some unsightly stains and stinky socks. You could also end up paying more in energy and water bills, and may even find yourself having to replace your clothes more regularly.

The good news is that a high quality washing machine doesn't have to cost the earth. In fact, CHOICE washing machine expert Ashley Iredale says that price is no indicator of performance when it comes to washing machines. "Spending more might get you additional programmes and fancy features, but it won't guarantee you a better machine," he says.

And he should know what he's talking about. The testers in our labs don't just throw on a couple of loads of washing and see how they come out. They use set loads of cotton materials, as well as swatches of cloth that are embedded with a specific amount of dirt, fray swatches that are identical, and detergent that is made up of a very specific formula.

They even use a special machine to examine each cloth to calculate exactly how much dirt has been removed. Learn more about how we test.

We compare two top loaders and two front loaders to show that the most expensive model isn't always the best. Our comparison proves that it's worth doing your research to help you choose a machine that cleans your clothes without cleaning you out.

Check out our washing machine reviews for the full results of our expert lab tests to find the right product for you.

If you think a more expensive washing machine will equate to cleaner clothes, think again. The exxy Fisher & Paykel model scored significantly lower than the affordable Haier for dirt removal and it also scored worse for gentleness, meaning it's more likely to leave your clothes damaged (although the Haier isn't particularly gentle either).

But the Fisher & Paykel won't just cost you more upfront – it will keep costing you more over time, using nearly twice as much water as the Haier and costing almost twice as much to run annually.

The Fisher & Paykel has a slight edge on the Haier when it comes to spin efficiency, meaning it might save you some time on drying your clothes, but it also takes an extra five minutes to wash the clothes in the first place.

Top loaders tend to use more water, energy and washing detergent than front loaders and they can also be a lot harsher on your clothes

The Haier is missing some useful features like out-of-balance correction, selectable spin speed and automatic door lock, which the Fisher & Paykel does have. So, if these are important to you, it might tip the balance slightly in Fisher & Paykel's favour.

Overall, our testers weren't overly impressed with either of these machines, but Iredale says their lacklustre performance is fairly typical of top loaders in general.

"Top loaders tend to use more water, energy and washing detergent than front loaders and they can also be a lot harsher on your clothes," he says.

There's no doubt that when it comes to day-to-day performance, the LG beats out the more expensive Asko, boasting better dirt removal, rinse performance and spin efficiency. This means your clothes will come out cleaner and dry faster, making for a more enjoyable laundry experience. The LG is also noticeably quieter.

However, the Asko costs less than half as much to run, uses slightly less water and completes its wash cycle a lot faster, which could be compelling positives depending on your priorities.

But it's worth noting that, despite having significantly lower running costs, the Asko's high retail price means you'll still end up spending more buying and running it over a period of 10 years ($2330) than if you opted for the LG ($1916), unless of course you manage to nab it for a good price on sale.

Tags:  where to buy haier robot vacuum cleaner in australia