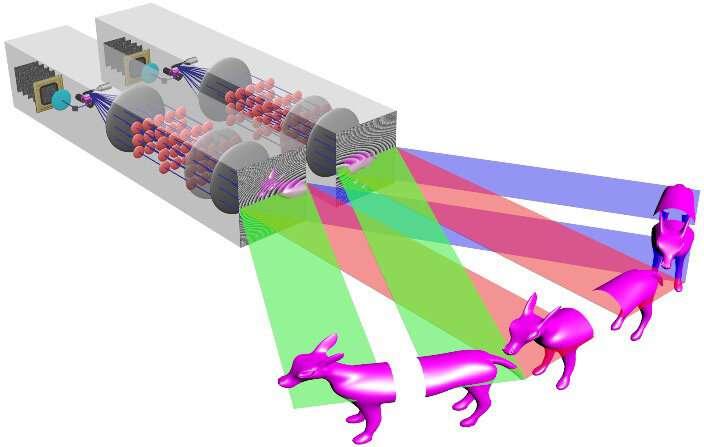 Researchers have developed a new method to display highly realistic holographic images using “holobricks” that can be stacked together to generate large-scale holograms.

The researchers, from the University of Cambridge and Disney Research, developed a holobrick proof-of-concept, which can tile holograms together to form a large seamless 3D image. This is the first time this technology has been demonstrated and opens the door for scalable holographic 3D displays.The results are reported in the journalLight: Science & Applications.

As technology develops, people want high-quality visual experiences, from 2D high resolution TV to 3D holographic augmented or virtual reality, and large true 3D displays. These displays need to support a significant amount of data flow: for a 2D full HD display, the information data rate is about three gigabits per second (Gb/s), but a 3D display of the same resolution would require a rate of three terabits per second, which is not yet available.

Holographic displays can reconstruct high quality images for a real 3D visual perception. They are considered the ultimate display technology to connect the real and virtual worlds for immersive experiences.

“Delivering an adequate 3D experience using the current technology is a huge challenge,” said Professor Daping Chu from Cambridge’s Department of Engineering, who led the research. “Over the past ten years, we’ve been working with our industrial partners to develop holographic displays that allow the simultaneous realization of large size and large field-of-view, which needs to be matched with a hologram with a large optical information content.”

However, the information content of current holograms information is much greater than the display capabilities of current light engines, known as spatial light modulators, due to their limited space bandwidth product. 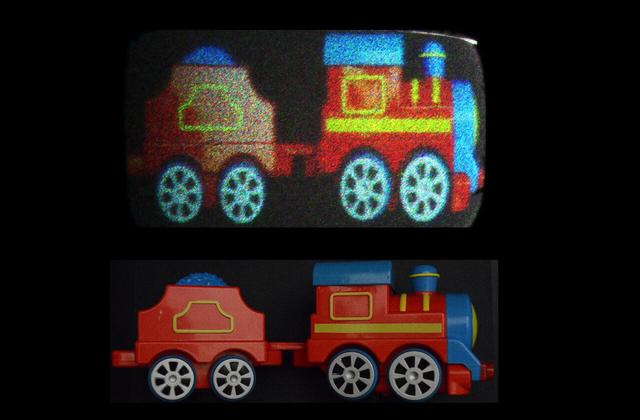 For 2D displays, it’s standard practice to tile small size displays together to form one large display. The approach being explored here is similar, but for 3D displays, which has not been done before. “Joining pieces of 3D images together is not trivial, because the final image must be seen as seamless from all angles and all depths,” said Chu, who is also Director of the Centre for Advanced Photonics and Electronics (CAPE). “Directly tiling 3D images in real space is just not possible.”

To address this challenge, the researchers developed the holobrick unit, based on coarse integrated holographic displays for angularly tiled 3D images, a concept developed at CAPE with Disney Research about seven years ago.

Each of the holobricks uses a high-information bandwidth spatial light modulator for information delivery in conjunction with coarse integrated optics, to form the angularly tiled 3D holograms with large viewing areas and fields of view.

Careful optical design makes sure the holographic fringe pattern fills the entire face of the holobrick, so that multiple holobricks can be seamlessly stacked to form a scalable spatially tiled holographic image 3D display, capable of both wide field-of-view angle and large size.

The proof-of-concept developed by the researchers is made of two seamlessly tiled holobricks. Each full-color brick is 1024×768 pixels, with a 40° field of view and 24 frames per second, to display tiled holograms for full 3D images.

“There are still many challenges ahead to make ultra-large 3D displays with wide viewing angles, such as a holographic 3D wall,” said Chu. “We hope that this work can provide a promising way to tackle this issue based on the currently limited display capability of spatial light modulators.”

Tags:  why is my robot cleaner so noisy